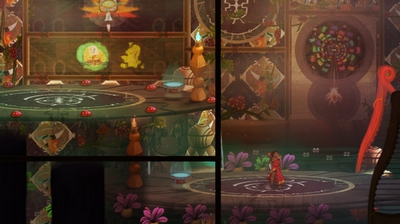 Plug In Digital Label and Kiro’o Games, the first game studio in Central Africa, is launching Aurion: Legacy of the Kori-Odan, a 2D African-based Fantasy-Action-RPG for the PC on Steam today.

“We feel like history is being made for our African culture today as we release Aurion to the world,” said Olivier Madiba, founder of Kiro’o Games Studio. “Our team really brought African magic and mythology to life in this great story and action-packed game.”

Aurion will be showcased at the upcoming PAX East (April 22-24) show in Boston in the Indie MEGABOOTH stand.

Aurion pays homage to the culture and legacy of Africa with its hand-drawn and animated African-style graphics and a deep storyline that unfolds over more than 20 hours of innovative RPG and action-packed gameplay filled with combat and combos. The dynamic gameplay is partially inspired by the old school Tales Of series, and focuses on 2D real-time combat sequences with narration and environments both drawing deeply from African culture, myths and lore.

Developed by a team of passionate gamers based out of Camaroon, Africa, Aurion was funded through a successful Kickstarter campaign that was 124% funded, with 1310 backers pledging more almost 50,000 Euros.

“Response to Aurion has been so amazing and we are so happy to work with Kiro’o Games to bring this labor of love to the gaming community,” said Francis Ingrand, Plug In Digital CEO.

The story of Aurion begins with a young prince named Enzo on the eve of his coronation and wedding day. He is thrust into trouble as he finds himself tied up in a coup and then exiled with his new wife, Erine. Through thrillingly executed, combo-heavy action sequences, Erine and Enzo will redefine their bond, rescue the land from its villains, and restore their legacy. Luckily, Enzo can call on the Aurion, a powerful collective energy channelled from past ancestors that can unlock devastating fighting abilities and combos to help him beat his foes.