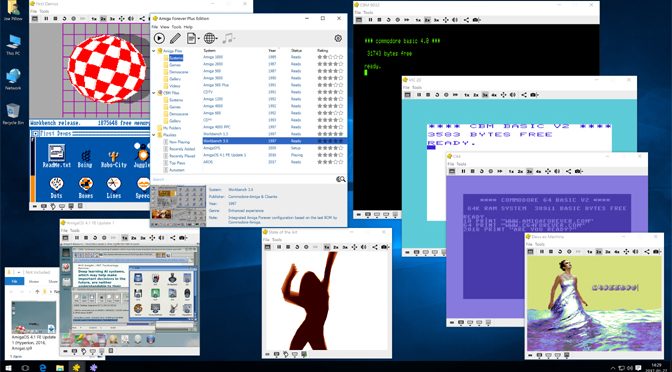 Once again, the new editions are the result of 18 months of development since the previous major version, and now encompass more than 600K lines of code written by Cloanto, seamlessly integrating with a collaborative effort of emulation plugins and content preservation.

“Virtual machines, virtual keyboards, virtual joysticks, virtual mice… real enjoyment! Whether you always wanted to move a PET/CBM text cursor with a click, or pop up an accurate and fully reconfigurable onscreen keyboard for Amiga and 8-bit systems, this release has it all,” said Cloanto’s Mike Battilana.

Work on the input front, which in version 7 had a focus on physical and virtual game controllers, was continued in version 8 by revamping existing features and adding virtual mouse and keyboard functionality that has no par in other emulation environments. In order to achieve an accurate implementation of the widest set of Commodore/Amiga systems, more than once we had to ask a collector to open one of their rare machines to confirm some internals. Former Commodore engineers graciously assisted with details that only they could know. When the mouse is used to position an 8-bit cursor, or multiple keys are pressed or tapped on a popup keyboard, or the Amiga keyboard language is changed at runtime in the Input Prefs and propagates up into the emulation and authoring side, the results are both historically accurate and surprisingly seamless in their modern usability.

The deep connections between Windows and CBM/Amiga ROM internals on the input front took several months to craft, yet are easy to use. The same is true for the new fullscreen emulation controls, which required the creation of a graphical user interface with menus and buttons that could be used with the mouse or keyboard as well as with game controllers, at a low level where this is not provided by Windows.

As part of its “preservation done right” commitment, Cloanto entered into agreements with Stanford University Libraries, the German National Library (Deutsche Nationalbibliothek, DNB) and other cultural and preservation institutions. These collaborations are spontaneous, and Cloanto does not receive payments or funding. Ongoing efforts also include a “kiosk mode” emulation frontend for museums.

“Working on projects like Amiga Forever and C64 Forever and remaining in touch with our community has allowed us to keep nourishing the sentiments of passion, beauty, excellence and friendship that have accompanied this journey since the 1980s. We also learned how continuing this longstanding endeavor brings with it some mostly thankless tasks such as sorting out the occasional legal doubt and standing up for the truth. In working hard to research rights and respect rules, Cloanto has become a ‘reluctant torchbearer’ of something bigger and of larger interest than we could ever have imagined to be involved with more than 30 years ago. Fortunately, as an independent entity, Cloanto does not lack the courage or the ability to change, or to hand over.

“Continuing on the discourse that was first outlined at cloanto.org a few years ago,” said Mike, “I remain personally engaged in exploring possible futures involving a nonprofit and/or foundation, open source, and other scenarios that could best help the cause of Commodore/Amiga preservation and support. As in the past, during 2019 I plan to attend events like Amiga Ireland, AmiWest in Sacramento and Amiga34 Germany. I again look forward to meeting old and new friends and to promote consultations on this important topic.”