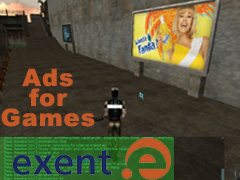 Over the past few years I have been hearing about a new concept in games on demand delivery that should significantly reduce the cost to the end user. Exent is the leader in providing games on demand and
as its COO, Yoav Tzruya is in charge of managing Exent’s global operations, activities and overall business. Recently GiN sat down with Mr. Tzruya to find out what is going on in the in the new world of in game advertising.

GiN: Can you give us a brief background on your company?

Recently, we launched a new in-game advertising technology that allows for the establishment of release windows similar to cable TV for video games and creates new monetization opportunities for video games, with no need for the game’s source code.

GiN: How did you move from the premier games on demand provider into doing in game advertising?

Learning from how cable TV first started and the impact it had on Hollywood studios, it was clear to us that in order to create a new content consumption pattern and enable word-of-mouth marketing, we needed to come up with a subsidized model to get users hooked and from there sell them the premium offerings.

The model today is crippled a bit in a sense, when we only have premium offerings. It is as if we were trying to teach people in the early 70s about cable TV, by offering them a subscription to HBO for $15/month. This is just not enough – you first need people to experience and only then sell them the premium offerings.

We started to work 3 years ago on in-game advertising technologies. However, coming from the digital distribution side and knowing that publishers will not go and embed SDKs into all their catalog games, we worked on developing a technology that does not need any developer intervention.

As a result, we got to a point where our technology can enable in-game advertising for all games, old and new, for a fraction of the cost associated with integrating an SDK into the game, enabling us to approach the 650M units or so installed in the field, and not only a few millions of integrated, newly distributed titles.

GiN: Since you do not need the code, will you be seeking the permission from the developers to place new advertising into their games?

Tzruya: Absolutely. Under no circumstances would Exent embed ads within games without publisher consent. Exent will definitely ask permission from the Intellectual Property owners of the games. We will work directly with publishers to gain the rights to place ads within games.

GiN: Given that you can insert advertising to pretty much any game, what types of games are you focusing on?

Tzruya: We can support in-game advertising on all games- from casual to hardcore games as well as MMOGs. However it is important to note that although the technology is not limited to a game type, Exent recognizes and believes that effective in game advertisement can only be reached if conceptually appropriate ads be inserted into games. As such, product placement should serve to enhance the game play experience (i.e., makes it more contextual) and not interfere with game play.

GiN: On what types of surfaces can you place advertising?

Tzruya: Exent’s technology allows advertisements to be placed on essentially every object of the game. Advertisement can be put on billboards, walls, clothes, or for that matter any 2D or 3D objects.

Our technology further supports audio advertisements, meaning we can augment the game with sound tracks promoting brands, correlated to the user’s activity in the game. For example – as the user approaches a certain advertisement, we can play an audio commercial for that brand in the background.

GiN: Besides static ads can you insert advertising in any other formats?

Tzruya: Yes, the technology can identify any object within the game, movie files, animations, 2D, 3D, and even audio (4D) objects to be defined as an ad-spot. Any texture, facet, vertex set and sound bite can be individually identified, controlled, and augmented with advertisements. Exent’s ad-insertion technology can rely on either static advertising or dynamically serving the ads from Exent’s or a third party ad-server.

GiN: How much time does it take to design, develop, and implement an advertising campaign for a single game?

Tzruya: The time it takes to fully create an advertising campaign is surprisingly minimal- anywhere from a few hours to a couple days- depending on the type of game and degree (amount) of ad spots.

Furthermore, there is no need for any developer support and we can achieve a high level of flexibility in the campaign creation. For that matter, if one wanted to increase the number of spots in a game from 20 to 2,000, we just need to go through a configuration phase on the campaign management system, designating new spots inside the game, spots that were previously NOT in our inventory at all.

The work generally includes identification of ad spots, creative work to actually create the ads, uploading the ad-inventory into a campaign management system, and creating business rules for defining the campaigns.

Tzruya: We will certainly ask users when we want to advertise on properties they "own" – for example, on games they already purchased in retail. Exent realizes that users may be hesitant to accept ads in their games, therefore we will offer community building incentives to encourage the user to accept the advertising – examples are game personalization options, multiplayer tournaments, instant messaging from within the game and prizes.

Obviously, when the user receives the game for free or for a discount, there is no additional need to request the user for their permission, as they received a dramatic cost decrease from in-game advertising.

GiN: What kinds of data will you be providing to your advertisers?

A game environment is a 3D environment where objects may occlude each other, be small or large, far or close, with their back to us or facing us. In order to properly charge advertisers for impressions, these factors need to be taken into account.

Exent’s in-game advertising technology collects information in regards to the length of the impression/exposure, the number of impressions, angle of the image/object (in a 3D environment), size (as the user may get closer and further from the image), FPS information (used for animation and video ads), screen resolution information and the percentage of the ad displayed (accounting for cropping of images).

It is of utmost importance that the advertisers receive proper data on the effectiveness of their in-game advertising campaign, and with our technology, we address their needs, as well as improving targeted marketing.