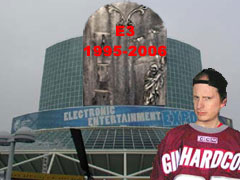 Since 2000, my annual trip to Los Angeles for the Electronic Entertainment Expo was an event I looked forward to. Not only was I able to test out all the new games and systems months before everyone else even got a glimpse, but it was also a personal getaway for me.

And in the last few years, invites to corporate parties, and cool promotional gear made the trip to Los Angeles even more enjoyable. The last E3 alone was memorable because not only did I get invited to a killer retro gaming party on Santa Monica Blvd., perhaps the best E3 party I ever attended, but Sprint was also kind enough to give me their top of the line A900 "Blade" phone.

That phone was also used in a contest against other media folks to win a brand new Tetris arcade cocktail table that was delivered to me a few weeks later. You can't get much better than that. To me, E3 wasn't just another assignment to cover, it was an experience and a vacation wrapped into one.
But now, thanks to the ESA's decision, that's all over.

Last Monday, the ESA confirmed reports that next year's E3 will be downgraded to a "more intimate event focused on targeted, personalized meetings and activities." In other words, the previous E3 shows which brought in up to 60,000 plus people will now bring in only a small group of 5,000 professionals. Even worse, the event will no longer be held at the Los Angeles Convention Center. Instead, it will be held at a small hotel, moved back to July 2007, and renamed as the "E3 Media Festival." Sheesh Doug (Lowenstein, president of the ESA), why don't you just call it the EMF? I know a British band that could play the show.

I know it's not entirely Doug's fault. There was concern from some of the larger company executives who felt that E3 was becoming so huge that they weren't getting their messages out. Still, I have to wonder about that excuse. After all, these are the same companies who are always putting their best titles behind closed doors so only those with an appointment can get in.

I thought that was supposed to be settled at E3 06 when the first two hours were reserved for early access media only? I guess that wasn't the case.
By cutting down the number of attendees down to about 5,000, that means that only the big name media companies will be invited to the show. Ziff-Davis (EGM,) Future Publications (OXM,) CNET Networks (Gamespot,) and IGN Entertainment will have no problem getting access to the show, but what about the smaller Web publications, GiN included? It's almost like the gaming equivalent of the Yankees (all the big publications) getting all the players, while small market teams like the Pirates (GiN) fail to even get their foot in the door.

Also, I doubt the mainstream media like the big newspapers are going to send people to the small event. The big press mostly wants to cover the culture of E3 and the silliness of the show. I doubt they will want to send reporters to cover a subdued industry event anymore than they would want to cover a muffler show.

And what about the smaller developers? There are tons of up and coming gave publishers/developers that want to get their foot in the door, and they look towards publications like GiN to get their message out, while the big boys are only concerned with Sony, EA and Microsoft.

Look at 10tacle Studios/SIMBIN. Remember them? They are the guys responsible for the award winning GTR series for the PC and eventually the Xbox 360. They were looking for anyone to get their word out, and they were kind enough to look towards us to get their game reviewed even though not many others would bother with them in their little 10 by 10 booth downstairs in Kentia Hall. If GTR debuted at E3 2007, we might not even be able to give them a shot cause we might have never met them. Downgrading E3 will cripple a lot of new publishers wanting to unveil their newest titles, at least if the show is handled wrong.

And what about the city of Los Angeles? E3 was a huge money maker. Hotels and taxi cab drivers look towards E3 as a huge source of income. Taxi drivers alone can receive upwards of a 50 percent boost of income during this three day stretch. What is going to happen to both these services now that E3 is going to be cut down by about 90 percent? Surely the city of Los Angeles is upset about this. E3 might have a contract with LA through 2012, but I wonder if LA will even care if E3 stays there. A small pocket of journalists sheltered inside a single hotel won't even make a dent in the city's revenue.

Let's face it. The E3 that we know and love has changed forever, and for some of us, we will never be able to experience it again. Hopefully there will be a silver lining in this dark cloud, but it looks quite doubtful. Thanks Doug, and all of your ESA industry insiders, for taking a wonderful annual tradition away from us, and taking away a huge source of income for the city of Los Angeles!