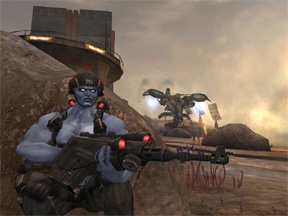 Across the expanses of post-apocalyptic Nu Earth, a war is raging between two factions of remaining humanity. Eidos Interactive’s Rogue Trooper drops you into the middle of the conflict between the Norts and Southers. The prize? The prime real estate Nu Earth sits on near one of those ever important intergalactic wormholes. While not the greatest third person shooter in recent memory, Rogue Trooper does offer solid and imaginative gameplay.

Once you take control of the aptly titled Rogue, you immediately think, "I think I’ve played this one before." But if you stick around for more than the first 20 minutes, you will realize this game has some depth to it. The sad thing is the game doesn’t seem to last much longer than those first 20 minutes.

As Rogue, the last of the Genetic Infantrymen, you are charged with defeating the opposing Nort faction using your superior combat skills, protective blue skin, and dead comrades. While your entire race was seemingly wiped out in a storyline double cross, you can use your squad’s specific talents, via their souls in microchip form. While a little creepy, your three fallen buddies (Gunnar, Bagman, and Helm) increase you ability to shoot, upgrade, and access different areas of the game.

This idea of a complete squad in one soldier gives Rogue more depth than the average grunt in a war game. The ability to upgrade on the fly by salvaging parts left by disposed enemies is a nice change from having to wait for a specific time or place to kick it up a notch.

You will quickly find out that there are many ways to engage the enemy in Rogue Trooper. There is a strong emphasis on finding cover and either taking out enemies by peeping and sniping, chucking grenades over you head, or firing blindly and following up with some well-aimed full auto action. Rogue can also sneak up and take out enemies with stealth kills, place mines, set up traps and sentries, or jump on one of many heavy arms emplacements.

Whatever your preference, there certainly are a variety of ways to get your killing on. Unfortunately, this also is one of Rogue Troopers drawbacks. With so many deadly options at your fingertips, controlling Rogue in the heat of battle can be tedious. The slippery controls and half dozen menu screens hinders your ability to utilize your arsenal effectively. Apparently, there is something to be said for having other guys in your platoon doing their jobs with some autonomy.

Another of the game’s minuses is its overall look and sound. The graphic resolution is pretty good, but the layout and coloring of the environments are rather dull and cartoonish. The background effects are similarly bland, and when coupled with an environment that isn’t all the destructible, you don’t get that feeling of immersion vital to a great war game experience.

The cinematics are done in the same resolution as the gameplay and usually involve cheesy future wartime dialogue to drive the story. The voice acting in the cutscenes is forgettable, and while the sound effects in the game are what you’d expect to find in a war shooter, they are equally mediocre.

Rogue Trooper also supports online multiplayer and co-op mission play. You can combine online play with an optional headset to talk smack on some dirty Nort’s mother. This is a nice feature, although the multiplayer is a little bit lacking in substance, with each map dictating a few different game formats. It’s pretty much a by the numbers 4-for-all bloodfest incorporating the combat features of the single player missions and allowing you to play as Rogue or one of his squad buddies (within their own bodies this time).

Despite these setbacks, Rogue Trooper is a very fun game to play. Using diverse methods to dispatch hundreds of Norts and salvaging their remnants for new and deadlier ways to take out said Nu Earth faction is thoroughly enjoyable. At times you will feel a bit overwhelmed by the fact that you’re a one man platoon, and by the time you get the hang of it, the game is almost over.

With a little more time and combat boot polish, this could have been an outstanding third person sci-fi shooter, but if you’re looking for a satisfying way to kill an afternoon, this is your game.