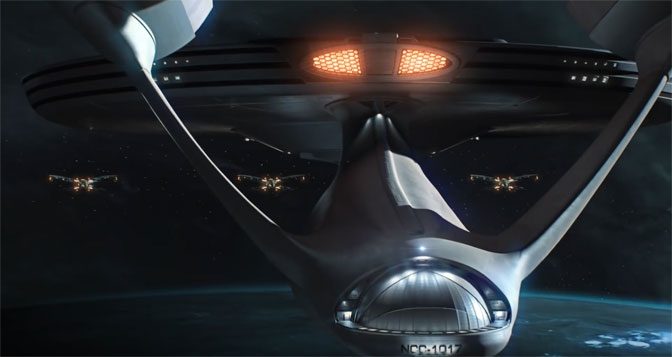 HERE THERE BE SPOILERS!

One of the elements of Star Trek that I appreciate most is how important choice is to the franchise. Q puts humanity on trial in “Encounter at Farpoint,” demanding to know why humanity believes itself to be worthy of the stars. Picard answers for us when he explains that humanity has outgrown its baser impulses, which is not quite accurate. Rather, Star Trek teaches us over and over again that choosing to be better, even when we don’t quite rise to the occasion, is what matters. “Terra Firma II” drags Emperor Georgiou through conspiracy and blood to force her to make that choice. Because she does so, she wakes up with an opportunity to do better, and it all happens just in time for Christmas.

“Terra Firma II” picks up where “Terra Firma I” left off, with Burnham being dragged into the agonizer. Burnham accuses her mother of weakness and claims that Lorca has stirred up a potential rebellion with the Coalition, a loose trade alliance of Andorians, Klingons, and the Romulans. Georgiou assigns Killy the task of breaking her but requires that she keep Burnham alive. Months pass as Killy tortures Burnham, even to the point that Dr. Culber must force feed Burnham to keep her alive. Georgiou watches from afar, begging the absent Burnham to change. Georgiou even descends into the brig to leave Burnham a globe full of fireflies while recounting a story about Burnham’s night terrors. Killy argues that Burnham should die, but Georgiou remains staunch in her belief that Burnham can change. Meanwhile, Saru confesses that he feels Vahar’ai coming upon him and asks Georgiou to cull him. Georgiou refuses, telling Saru to lock himself away because passing through the madness will make him stronger.

Eventually, Keyla Detmer comes to Burnham in her cell and tells her that Lorca is not coming. She begs Burnham to choose to live, so Burnham begins to eat. Captain Burnham requests and audience with Georgiou and pledges herself to the Emperor’s service. Georgiou demands that Burnham take Detmer and eliminate all of her co-conspirators. They track Landry and kill her in the ship’s corridor before taking her Terran badge to Georgiou where Burnham presents the emperor with a startling number of badges similarly claimed from the bodies of the fallen. Burnham claims that these are all of the conspirators, but Georgiou asks her if that’s true. Burnham then stabs Detmer and turns to her mother to swear that now all of the conspirators are dead. During a supper in the Emperor’s quarters, Burnham lauds her mother for using backchannels to destroy the Coalition, and Georgiou attempts to teach her daughter that there is another way to rule.

Burnham reveals intelligence that one of Lorca’s lieutenants has reached out from Risa, so Georgiou orders Killy to jump to the planet. They find Duggan only to have Duggan threaten them via comm. Burnham orders his ship destroyed and Duggan beamed aboard the Discovery. Georgiou announces her intent to meet Duggan in the brig with Burnham, and Burnham orders the honor guard to accompany them. There, Burnham shoots Duggan and turns on her mother, glorying in her triumph. Georgiou tells her daughter that she never trusted her the way she wished, and Killy storms in with a force of loyalists, including Saru. During the ensuing skirmish, Killy and Saru make short work of Burnham’s forces. However, Burnham draws Georgiou into a cell where they duel each other, knives vs. sword. Burnham lands a lucky strike, but Georgiou ultimately stabs Burnham fatally. Killy’s crew brings the forcefield down in time for Saru to rush to the Emperor’s side.

Georgiou awakens back on Dannus V, where for Prime Universe Burnham and Carl, only a few moments have passed. Georgiou maintains that she’s been gone for months, and her biodata monitor shows three months of data. Burnham and Georgiou demand that Carl explain who he is, and he reveals himself as the Guardian of Forever, in hiding after the disaster of the Temporal Wars. He then reveals that he sent Georgiou back to the Terran Empire to weigh her worthiness. Georgiou bitterly confirms that she failed to save her daughter, but Carl argues that she saved Saru, and because she did, Saru will be able to save many more Kelpiens. Carl tells her that she is worthy and opens a portal to send her back to a time when the Prime and Mirror Universes were in line. After a heartfelt farewell, Georgiou steps through, and the gateway disappears.

Back on Discovery, Book uses Emerald Chain technology to enable Stamets and Adira to punch through the interference that has stymied their efforts to hack the Khi’eth’s systems. Saru reports their success to an Admiral Vance who is dubious at the use of Emerald Chain technology on a Starfleet vessel. Book swears that the tech is safe to use, and Vance demands an update as soon as they have data from the stranded Kelpien vessel. The episode ends with the Discovery crew hosting a celebration of Georgiou’s life, allowing everyone to bid her a symbolic goodbye.

“Terra Firma II” is an example of a cameo from existing lore done right. The Guardian of Forever comes to us from “City on the Edge of Forever,” which is quite possibly the best TOS episode. For those unfamiliar, Captain Kirk and Spock travel back to 1930s Earth where McCoy’s accidental incursion has erased the Federation from existence. Once on Earth, they discover that McCoy saved Edith Keeler from death, resulting in a massive pacifist movement preventing the United States from entering WWII. The changes in the timeline rippled forward from there, and the Federation never formed. Thus, Kirk and Spock must prevent McCoy’s good deed for the good of their entire history. It’s a fantastic story about sacrifice for the greater good and the effects of unintended consequences.

While Emperor Georgiou has cleaved to her Terran identity, ostensibly remaining unchanged by her exposure to these silly Starfleet officers and their beliefs in pesky ideas like “justice,” “fairness,” and “cooperation”, “Terra Firma II” throws a stark light on just how wrong she is. Where in season one, Georgiou feasted on Kelpien, she now offers Saru the key not only to ensure his own survival but that of many, many other Kelpiens. Perhaps Emperor Georgiou would have reveled in Burnham’s cruelty in destroying the artists on a random planet, but this new Philippa Georgiou finds it appalling. Burnham calls the change weakness, but Georgiou does not believe it is. Rather, she believes that the change in herself is its own kind of power, and she wants to impose the same change on the Terran Empire.

Unfortunately, that change proves too much for the bloodthirsty Terrans, and Georgiou finds herself stabbing her daughter to death once again. She returns to the Prime Universe grieving and angry at her own failure, but Carl reminds her that she did not fail. Rather, she saved a Kelpien. Carl gently explains that her goal of saving Burnham was never possible. There are moments that are fixed, and Mirror Burnham’s death is one of them. Mirror Saru’s death, however, was not. Georgiou saved Saru without regard to what it indicated about her, and despite her decision to enlist him as a spy, saving him was certainly unnecessary to her plans for Burnham. She really didn’t have to give him the knowledge he needed to survive, but she did. What earns Georgiou a second chance is not achieving her loftier goal, rather it’s a small, spur-of-the-moment choice that reveals who she has become. Where McCoy’s actions nearly doomed the Federation, Georgiou’s choice offers hope for the Kelpiens. That’s not something she intended to do, but that choice will have significant effects on the Mirror Universe. In that sense, the episode is a nice bookend to “City on the Edge of Forever.”

Carl tells Georgiou that she was being weighed, but he never specifies who or what was doing the weighing. Did Carl? Did some other alien intelligence? We don’t know, and we don’t need to know. While Star Trek has always emphasized the need for a rational explanation for whatever happens onscreen, resulting in some truly epic technobabble, none of that gets applied to the Guardian—not in “City on the Edge of Forever,” not in “Yesteryear,” and certainly not here. The Guardian is just magic, and that’s absolutely okay. Is the Guardian a MacGuffin? Yes, but what these episodes do is highlight how a MacGuffin should be used. The Guardian itself does not matter so much as Georgiou’s transformation or her eventual acceptance of that transformation, so using the Guardian as a doorway serves to hand-wave details that simply don’t matter and as a fantastic callback to existing Star Trek canon. Plus, it’s a big universe. The Guardian reminds us that there is still mystery. We don’t understand everything. Yet.

If I have one complaint, it’s that the episode feels a bit rushed. The passage of time during the torture montage doesn’t really land the way it should, particularly since Georgiou is meant to be running an actual Empire rather than hanging out with Killy and Co. watching her daughter be tortured. Additionally, most of Georgiou’s development gets shown to us in the form of voice-over comments addressed to a Michael Burnham who can’t hear them. The lines themselves are great, saturated with light and dark imagery that indicates the extent of Georgiou’s changes and fit beautifully with Georgiou’s symbolic attempt to pass the light to Michael Burnham in the form of fireflies. However, even though I recognize the difficulties inherent to demonstrating the depths of those changes over time during a fifty minute episode, “Terra Firma II” suffers a bit for it, especially when compared to the characterization in “Terra Firma I.” However, Michelle Yeoh’s performance renders the episode a fitting end to this part of Georgiou’s story.