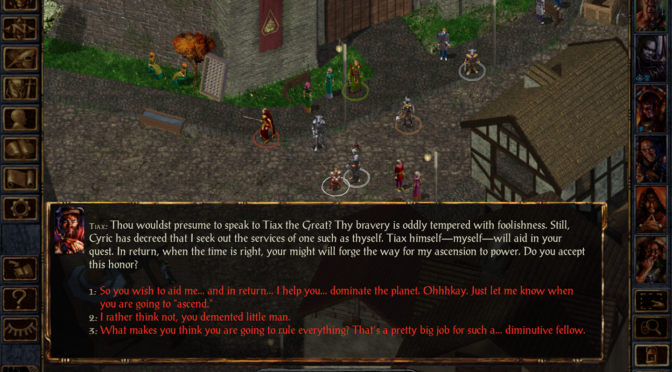 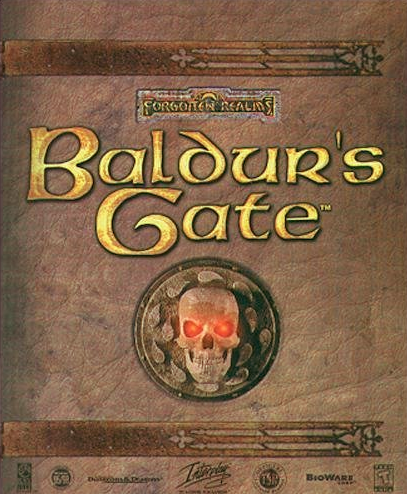 This week for Retro Game Friday I’m covering a game from the ’90s! It’s Baldur’s Gate!

Plot Synopsis: The Sword Coast has entered a difficult time: iron production has virtually halted, with metal products quickly ‘rotting’, tools and weapons breaking easily as a result (except magical weapons), while bandits scour the countryside seeking iron over any other treasure. The protagonist and friend Imoen had grown up together in Candlekeep,  an ancient fortress-turned-library in the rural Sword Coast region south of Baldur’s Gate, under the tutelage of their guardian, the mage Gorion, both of whom were brought in as orphans. Gorion, sensing trouble, decides to leave Candlekeep with the protagonist (known as Gorion’s Ward), explaining nothing of importance other than to move on…

Plot: The plot is pretty good, definitely living up to BioWare’s reputation of doing stories properly. Thankfully this was before they started working with EA so the ending doesn’t suck like a certain space opera’s third game’s finale

Characters: Other than the main character, who you can dictate the actions of for the most part, Imoen is probably my favorite character. I’ve always had a soft spot for female “rogue” characters and Imoen fit that bill perfectly. The rest of the cast was good, but again Imoen was my favorite.

Art: Here’s where the game is a bit clunky, the art has definitely aged. That being said they did re-release the game with enhanced graphics, so there’s that to consider.

Overall: If you’ve never played the game, you really need to.

For those who like: RPG, Action, Dungeons and Dragons, Choices, Good Plot, Excellent Cast of Characters.