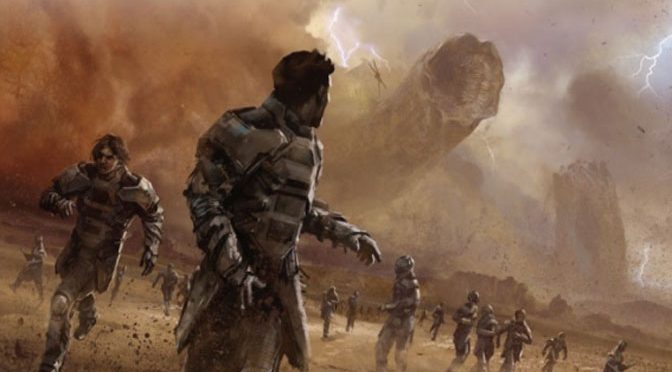 We at Game Industry News decided to review a table-top Role-Playing Game on Roll20, the Modiphius Entertainment product, Dune: Adventures in the Imperium. We have opened a game on Roll20 and invited you, the readers, to join us as we explore the system and the setting. Thanks to everyone who has joined us so far. It’s been a great start.

This is a report after the first week.

So far, we have nine players who showed up and the first session went well as we all made Houses and began looking at characters. Our idea is that each house can have multiple characters and that we make full use of the planet Dune as our starting point.

Here is the background for the game:

Before HOUSE HARKONNEN ruled Arrakis it was a protectorate of many minor houses. The Emperor did not want any one house to have too much power and the Spacing Guild thought it would be good to have competing interests harvesting spice so as to assure the price was competitive and not a monopoly. Make your own House, join others in their House or be a Free Agent as we play the game.

First out of the gate was House Misr: a farming house, like the Atreides but instead of being a Major House that farmed Rice on Caladan they are a Minor House that works the farms of other worlds. They are also an offshoot of the Zensunni Wanderers, the same precursors of the Freman on Arrakis. They have come to Arrakis to mine the spice with the other Minor Houses. They, like the Freman, do not name their leaders by inherited title but by a meritocracy.

Their first character was an Ambassador.

The next house was House Windsor, a minor house that had gone into seclusion on the Guild Sanctuary Tupile. Tupile is a secret space in the galaxy that only Guild Navigators know about. Defeated or Renegade houses are given sanctuary there. Here on Dune two brothers from that house, who escaped a Harkonnen prison are now trying to reestablish their house by mining spice.

The two brothers do not know the fate of the rest of their family, who are hiding in exile.

The last “House” will be the Freman themselves. This will be during the time of Pardot Kynes, the Imperial Planetologist who convinces the Freman that they can transform Arrakis. In the book, and the movie Liet Kynes is his child. Most Freman are convinced of him being a prophet but it is at the beginning of his efforts and some are skeptical.

This game will be interesting as Modiphius trumpeted the input they received from some great TTRPG writers.

Since I am running this at 5 AM Saturday Eastern Standard Time I am getting players from England, France and who knows where else!?! That is one of the beauties of Roll20 in that you can get players from “across the pond” and even further!

Next Week: Characters in Roleplay and Combat!!!