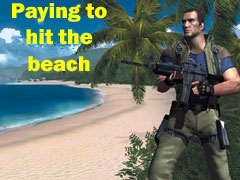 Sometimes you get what you pay for.

That statement is never so obvious as when playing computer games on the PC. Not that the cost of the game has anything to do with the quality of the game, at least not directly. But the price of your equipment sure does. It's probably one of the reasons that the console platforms continue to outperform PC games in almost every sales matrix.

Take a game like Farcry on the PC. The beautiful shooter takes place in a tropical paradise and features some of the most realist scenery I've ever seen. I just want to tell the mercenaries that are trying to kill me to cool it. Guys, I just want to swim around in your lagoons and vacation here. You can do your world domination scheme all you want and I won't be a bother. Just bring me a banana daiquiri every now and then.

But the reason FarCry looks so good is because my main test system has some amazing hardware, including 512K of DDR video memory. I installed the game on some less impressive systems to see what it would look like, and while playable, it was less than awe-inspiring.

Sometimes games will even change their entire appearance when adding new hardware components to a PC. Take Morrowind as an example, probably my personal favorite game of all time. Other than the original Starflight game back in the 80's, few games have monopolized so much of my time.

Having played Morrowind and both expansion packs on the PC, I decided to load the game up on my newest test system to go through with a different character. I figured it would look the same, but perhaps perform better.

When the game started I was amazed and shocked. It looked completely different than before! Water now shimmered in the sunlight and even made little ripples behind me as I swam. I could see from one end of a town to another, without the system fading out images at the horizon. I sent a note to a friend at developer Bethesda Software telling them what had happened and they said, "wow, with a system like that, you might even get a good frame rate in Balmora!" Which of course I do.

This is an example of an older game that had a rapid rebirth on my PC because I put some extra money into the hardware. Incidentally, when I recently upgraded the drivers for my video card the world changed yet again, though I am not as happy with the changes this time around. The water got too transparent so that at times it almost looks like it is not there.

Let's compare this to the PlayStation 2 platform. One of the first games I ever bought for my PS2 was an anime strategy shooter called Ring of Red. It looked good, and even experimented a bit with video clips in the intro. Years later, it looks exactly the same. If five years from now someone borrows the game to play in their antique PS2, it will look identical. And there is nothing I can buy to make it look any better.

The strength of that setup is that when you go to the store to grab a PS2 or an Xbox or a GameCube title, you don't have to worry about it working on your system. The designers have made the game so it will work. And if it doesn't, then thousands of other people are having the exact same problem. For the PC, unless you have the best system money can buy – and bought your system within the past week – you better at least glance at the system requirements before taking any title home.

On the PC, someone with a modest system might see an average game, while someone with a high end system will see a world that is pretty close to reality. Not only that, the person with the better system will experience better performance, less disk reading time and less if any slowdown. They get a generally a smoother experience.

The argument for the PC is that games generally look better, or at least have the potential to look better. A perfect example of this is Deus Ex from Eidos. On the Xbox the game looks good, but not nearly as good as when running on a PC. And I am not talking about just the resolution. In the same scene, there are just more details put into the PC version that when looking at them side by side, it's like night and day. Obviously the designers had to take a lot out of the Xbox version to make it run smoothly.

A game like FarCry probably could not run at all on an Xbox, much less a PS2 or a GameCube.

A while ago there was a minor effort from game companies to create programming standards on the PC that developers would follow. A high-end system would be defined, as well as a mid-level and a low-end one, and developers were supposed to program to one of those levels for a game. So a game would look as good as it could with a high-end configuration, but no better if your system beat those specs.

This plan was destroyed the first time a developer said "If we put in an extra lens flare here, it will look so cool, so lets forget about those guidelines. I mean, how cool is that extra flare going to look!"

And I am not saying the specs were a good idea, but PC gamers should be aware that every year or so, they are going to have to shell out a good chunk of cash to continue their hobby, either in upgraded components or an entire new system. No so the console gamer, but they are giving up some things as well by just focusing on console games – things they might not even know they are missing. And publishers should know that console sales are probably always going to outstrip PC sales based on the economic realities of having an identical install base versus one that is constantly changing.

Still, after years of owning both a PC and a console, I still gravitate to my PC when it comes time to relax and unwind with a good game. I am willing to pay to play, though not everyone will follow my example.