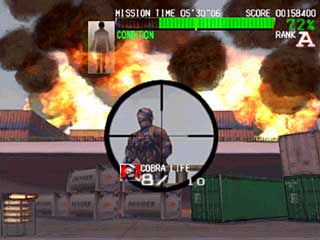 Konami has locked it’s sights onto pure old-school gaming goodness as it brings the entire "Silent Scope" series together into one dynamic jampack, "Silent Scope Complete." This three game bundle is sure to make any sniper fan’s dream come true.

Players can choose to play any part of the three game series they choose right from the start. However, I recommend that newcomers start from the beginning simply because while the storylines may not be linear, the gameplay controls do become more advanced as you go. Therefore it’s good to know the basics first. Old school players can either choose to play their favorite part in the series or perhaps pick up where they left off.

Either way here are your options:

In "Silent Scope One", the President and his family are kidnapped by a group of armed terrorists while traveling to a political campaign in Chicago. The terrorists are demanding the release of their leader from prison in return for the releasing of the President and his family. To avoid exposing the family to further danger, the government decides not to resolve the problem with armed forces. Instead they opt to send in an elite professional sniper (that be you) to regain control of the situation by rescuing the Presidential family and taking out the leader of the terrorist group.

In "Silent Scope 2: Dark Silhouette", another terrorist group has occupied a sealed research lab in an attempt to steal a prototype VX gas missile. The British government sends in a special counter-terrorist unit to deal with the situation, but all contact is suddenly lost in the middle of the mission. Fearing the worst, the government immediately turns to its secondary assault force, you and another brave sniper, to search and rescue the missing unit.

In "Silent Scope 3," a Dr. Scott, the leader of a clone research group with ties to a nationally run project gets kidnapped. Fearing the misuse of cloning technologies and the leaking of sensitive state secrets, the government dispatches an intelligence recon group to find the brilliant researcher. The efforts of the search uncover that the doctor was kidnapped by an enormously wealthy terrorist organization. However, still unknown to the government is Dr. Scott’s exact whereabouts. The government continues to pour out all its resources to locate the doctor until, finally, one year after the doctor’s disappearance, the government uncovers information on the dispersed bases of terrorist operation. They immediately put together an operation, under the command of a Marine Colonel Roberts, to rescue the doctor and cripple the organization. The colonel is authorized to select an elite hand-picked unit to carry-out this mission. He decides to entrust this most critical mission to a single man. Thus your special services are needed once again.

The Silent Scope series has never been a graphical showstopper, but fortunately for Konami, it’s the addictive gameplay engine that has won the hearts of fans over the years. "Story mode" is the meat and potatoes of each part of the series and basic rules are pretty much the same, no matter what story you choose to play.

In each stage, the player must carry-out a specific mission while taking out enemies and defeating the level boss within a specific time limit. A player’s life decreases when he is either shot by an enemy or accidentally shoots an innocent bystander. However, throughout each stage, special "Life-Up Girls" can increase your life gauge if you spot them in your scope. The game ends if time runs out or if you lose all lives.

The real skill of the game involves learning to swiftly lock your sights onto your enemy and pull off a critical hit (head shot or chest shot) within a shortened period of time. This becomes vitally important when enemy targets are spread out a good distance apart. If a player is too slow in neutralizing their target, chances are they’ll be shot by their own mark or a nearby enemy shooter.

I’ve found the best way to take out multiple enemies spread a fairly good distance apart is to zoom your scope out as you move from one target to the next. By doing so, you can almost halve the time it would take for you to acquire your next target if your scope was still zoomed in. Also it’s a good idea not to waste time zooming in on an enemy that is in close quarters with you. Simply zoom out and go for the quick kill. You may not achieve that critical hit you desire, but you’ll most likely live long enough not to regret it later.

The beauty of "Silent Scope Complete" is the better you become at the game the more you’ll keep coming back for more. And when "Story mode" begins to get old there’s plenty more action to choose from. Each version has at least one or two extra unique game modes to help keep the fun alive and boost replay value.

"Silent Scope One" offers an additional "Time Attack" mode. In this mode your mission is to eliminate all enemies and defeat a stage boss within a specified time limit. After clearing certain stages your performance gets ranked based on your time. You don’t incur damage from enemy fire nor do you get penalized for shooting innocent bystanders so feel free to "fire at will."

"Silent Scope Two" offers up a "Duel Mode" where the object is to seek out and eliminate your opponent in a series of matches. Winning more than half the preset number of matches will you give you the victory in the duel. You can gun it out in the city, forest or with air stages. Also worthy of mention are boss battle and mission modes.

"Silent Scope 3" presents the best offering with it’s bonus arcade mode, "Silent Scope Ex." This mode is for thrill seekers only. The story unfolds as you clear the missions you have been assigned. In each mission your life decreases as time passes by so it’s imperative that you take out enemies quickly. Your life will recover slightly by doing so.

At the end of each stage you have a small "window of opportunity" to pull off a one-shot critical hit on the stage boss. After the shot is fired you get to watch the bullet travel "Max Payne" style straight into your enemy’s weak point. If you hit the mark, it’s instant death for your foe. If you don’t, either a battle ensues or the mission ends in failure.

So we got cool story modes, plenty of ways to find ourselves in hostile situations, tons of enemies that need killing, and a healthy mix of additional gameplay modes to boost the replay value through the roof. What more could fans ask for? Hmm, how does a jazzy "Silent Scope Light Rifle" appeal to you?

That’s right this game couldn’t be called "Silent Scope Complete" without a light-gun peripheral and let me assure you this gun is "love at first sight." Number one, this isn’t just a light-gun, this is a full-sized light rifle and that in itself is way cool. The Silent Scope Light Rifle has a realistic kickback feature that makes the gun kick every time you pull the trigger. And I must say that there is something more special about feeling the kick of a light rifle being fired off your shoulder than feeling the kickback you would get while holding a handgun. It’s quite intense. The Silent Scope rifle also has an auto-reload switch and manual reload slider to get your "pump-action" on.

The rifle’s hottest feature, though, is its unique ability to activate the sight scope simply by moving your head slightly and looking into the lens. Because everyone has their own preferences, Konami has included a "Sensitivity Dial" so you can fine tune your rifle to your liking. Turning the dial counterclockwise will decrease the sensitivity while turning the dial clockwise will increase the sensitivity.

Unfortunately, the light rifle is sold separately from the game at a pretty steep $50 price range. But trust me, if you’re a hardcore fan of the Silent Scope series YOU WANT THIS GUN. Here’s your chance to trade in some of those old unwanted games toward something special. You won’t regret it, I promise.

Bottom line, Konami has found a new way to bring life back into an old-school arcade hit. Any gamer who is a big fan of the series would be foolish to let this game sit dormant on the store shelf. Silent Scope Complete is a sniper fan’s dream come true. I’m giving this one a very solid 4 Gin Gems.