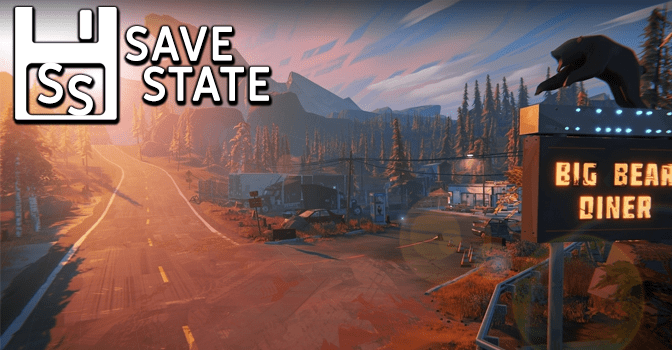 Welcome to Save State, where procedural generation can make us smile. While browsing through my Steam library I came across a pretty new title that caught my eye thanks to GiN’s editor in chief: Road 96. I may have spent a bit more time playing this game than expected, so I’ll just be talking about this one game since I have quite a lot to say about this work of dystopian fiction, ruled by a despotic dictator you’re trying to escape. What makes Road 96 different from your average Telltale game is that the variety of characters you come across will put you into a variety of different scenarios, and the game does an excellent job of shifting between tense and humorous moments when the situation calls for it, which is very important since this is a story about a teenager hitchhiking to escape a country ruled by a tyrant. 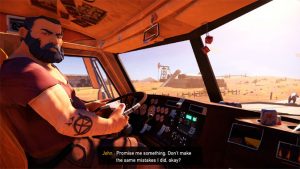 There’s an upcoming election in the oil-rich land of Petria, and while supporters vehemently approve of the dictator’s rule, a rising faction is pushing for the dictator’s political rival to win said election. Meanwhile, you play as a teenager trying to get out of dodge and get to the border crossing due to mysterious disappearances that happens to teens in Petria. Road 96 is a game that’s both narrative-driven and procedurally generated, and will present you with different situations each time you play. You’re a faceless teen, of sorts, whose personality is dictated by what you tell the characters from whom you’re bumming rides. 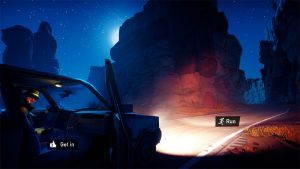 You’ll interact with a variety of different characters who each have their own stories to tell, and you commonly are offered choices that will impact your chances of escaping the country by crossing the border. Oftentimes, characters will ask for your opinions on what to do next, what your political views are, or how you view the future of the country as a whole. Road 96 is unapologetically political in presentation, a lot of the time, which resonated well with my personality since I find things like how society is governed and organized to be interesting. 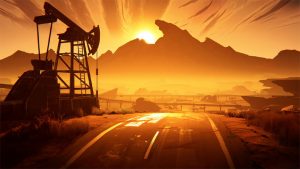 The road to the border is long, and arduous. With limited resources like money and energy, you’ll often have to rely on the kindness and goodwill of strangers you encounter along the way. Of course, since you’re a defenseless teen made of meat, you also can’t let your guard down since you don’t know who you can really trust. Thinking too highly of someone could lead to you getting taken advantage of, killed, or result in your belongings being stolen. Sometimes, the kindness you showed by giving someone a ride at the beginning of your journey can have a positive impact later on in the run. Other times, you may run out of food and need to eat something moldy that you found on the edge of road. Each run has a little something different to offer, and different characters, choices, and events will present themselves to you as you play. 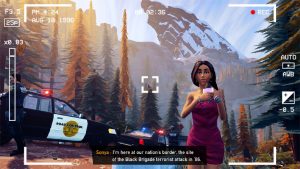 Of course, sometimes those conversations involve other characters asking for your political views, and Road 96 makes no qualms about its injection of politics in art: Choices you make may cause you to work toward becoming a revolutionary who fights against tyranny, or rush to the border to get across by just yourself – no matter who you leave behind. Some characters you meet may espouse some revolutionary-style rhetoric while others may support the current regime and spout fascist talking points. All of it is integral to the game, itself because how you speak may change from one carpool to the next, because you’re simply a teenager and you’re trying to keep yourself safe. If you’re overly sensitive by the presentation of an OAN-level anchorwoman as a type of villainous character, then maybe Road 96 isn’t the game for you. The game’s dictator, from whom you’re running, is portrayed unambiguously as a villain, and that’s just how Road 96 is. 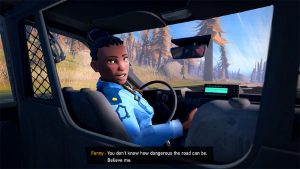 For the most part, Road 96’s gameplay is very similar to something from other cinematic adventure games- the largest portion of playing the game involves dialogue choices during conversation, though there are quite a number of mini-games you can experience in different runs, like playing a bootleg version of Connect Four, soccer, Pong, and the like. There’s even a mini-game where you’re in the sidecar of a couple of thieves, and you need to constantly dodge oncoming vehicles or else the sidecar might break and you wind up injured. The mini-games are generally pretty easy, so it shouldn’t be overly frustrating if you come across the same event multiple times across different runs of the game.

Road 96 has a beautiful cartoon art style, and complements this very well with its use of mixtapes that unlock new tracks for you to listen to- this is a road trip, after all. There’s a healthy variety of music in the game, with a number of rock, pop, synthwave-inspired 80s/90s music, and other types of songs for your listening pleasure. Each run of Road 96 may take around an hour or so, so having a variety of tunes for background music makes for a much better experience, overall. The game is also fully voice acted, and most of the voice acting does a great job at conveying the individual personalities of the people you encounter across your various runs of the game. 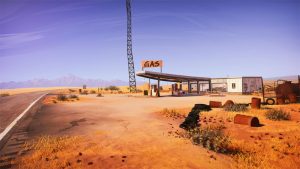 Each character you encounter will require multiple runs to get the full breadth of their story, too: You only encounter a main character once per run, so if you encounter someone at a bus stop at the beginning of your story, you won’t see how their story played out in the end. Similarly, if you run into a character late in the run, you may have no idea what happened, or why they’re so desperate, now. It’s difficult to talk about individual set pieces, but multiple runs of the game were almost entirely unique: In one instance, I was forced to sneak around and avoid getting noticed so I didn’t get captured, while in another I was able to boost cars, get caught by a cop, but the cop actually wound up joining my adventure for a bit. There’s likely a huge number of different events available for Road 96 to piece together, which makes it refreshing on a run to run basis as you try to explore the stories of each person you come across. 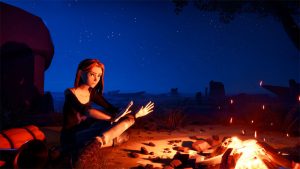 There is a skill system inherent to Road 96, similar to the cassette tapes you may find in that the skills persist through each run. The best characters in the game, a pair of thieves named Stan and Mitch, may teach you how to pick locks at the end of one run, which you can then use to open doors to various rooms and steal car keys, allowing you to do some sweet and easy carjacking. Each ability you unlock will give you an edge in a later run, as trying to escape over the mountains surrounding the border may leave you to die of exhaustion or from an awful fall if you don’t have the stamina-boosting feat, for example. These extra abilities are typically given to you by your interactions with the other characters in the game, which means they leave a lasting impact even if you don’t encounter them on your next run of the game. 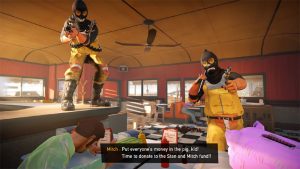 Road 96 is an incredibly interesting game, giving you a Telltale-like adventure game experience with a variety of colorful characters, flexibility in interactions, mini-games, and humor. Some of the people you come across are practically caricatures, like Sonya, the GNN anchorwoman, but the interweaving of satire, personal stories, and not knowing what choice may have doomed you really makes the game come to life across the different runs. 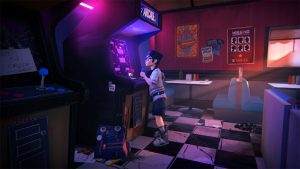 Narrative-driven games are always extremely fun, and while Road 96 can be a bit heavy-handed with its political themes since it has three major routes (escape, revolution, or the ballot box), the characters you encounter on your journey more than make up for any perceived politics slight. This is absolutely a game I would recommend to anyone who loves adventure games with a hefty emphasis on player choice.

That being said, we’ll bring this week’s edition of Save State to a close. Do remember to let your weebles wobble, and don’t let them fall down.