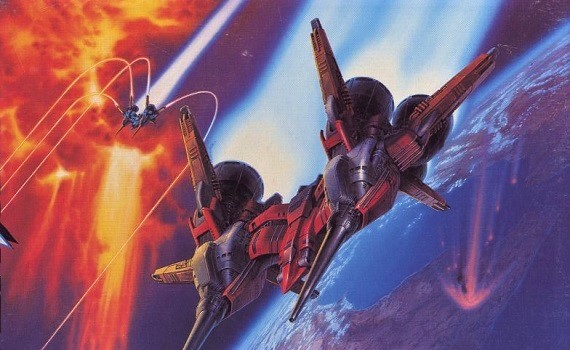 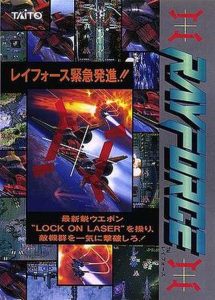 Hey all I’m back with another very classic game for this week’s Retro Game Friday.  It’s RayForce!

Plot: This game had a plot, something that surprises me, though considering it’s a post-apocalyptic story I probably wouldn’t have remembered it even if I had learned it way back when. Since I played it in the Arcade when I was a kid I don’t remember seeing any plot screen. Of course it could be my memory is faulty. Still the plot is pretty barebones, cloned human mind connects to a global computer system, and proceeds to wipe out the majority of humanity with the rest in some space colonies. Now said computer system is gunning for the remnants and it’s up to you to stop them.

Gameplay: This is again a bullet hell type of game, which means getting hit was very bad and destroying everything on screen that wasn’t you was a good idea. There were some powerups to change the main weapon on the ship you pilot, from something that fires only one beam to something that fires multiple beams at once. There was also a laser system for missiles to target stuff on the ground that wasn’t possible to be hit with the main gun. Frankly it’s nothing amazing and if you’ve ever played a bullet hell game, you’ve pretty much played RayForce. Still I have good memories of playing this at an arcade at a friends birthday party.

Overall: An okay Bullet Hell game, not the best, but certainly not the worst one to get introduced to the genre to if you’ve never played one before.

For those who like: Arcades, Bullet Hells, Top Down Perspective.