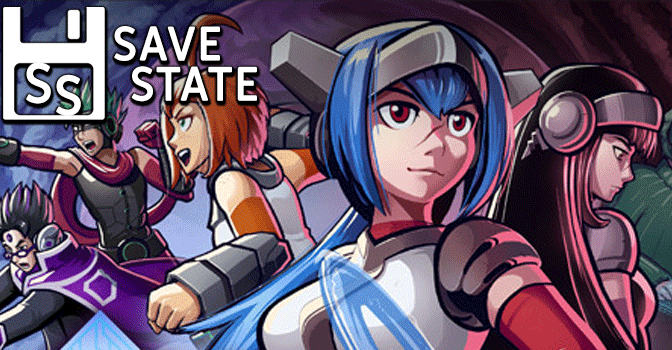 Welcome to Save State, where we cross our codes. Who needs the Konami Code when you found CrossCode in your library? CrossCode has absolutely nothing to do with Konami, but I figured it’d be a great way to start moving away from the rampant Metroidvanias that have been plaguing this column for the last few months. CrossCode was a game that I had an eye on for quite a long time- a pixel graphics indie RPG? That’s not just my jam, but the entire grocery store shelf of assorted jams. 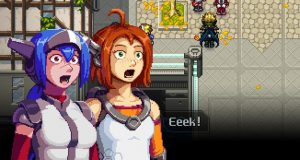 The story of CrossCode begins with a kind of flashback event where you control a very powerful character, and then quickly shifts to your control of the mute Lea, an avatar in a futuristic VR MMORPG. The whole of CrossCode takes place in this virtual world, and you meet a variety of characters with upbeat and bombastic personalities, because to them, this whole world is just a game. That being said, while CrossCode does spend a fair amount of time on its story, a lot of it is relatively upbeat character moments, and some of the heavier events in the game fall short of the gravity that the developer probably intended, at least until the DLC chapter. 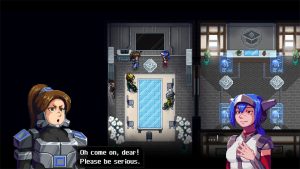 This, of course, isn’t to say that the story of CrossCode is bad or uninteresting, it’s just that the main reason why you’ll play this game will be for the excellent action RPG combat, and sweet digital biscuits is the combat of CrossCode good. Your movement is tight and quick, and every time you get hit, it’s not because the enemies are cheap, but because you didn’t hit the right button at the correct time. Controlling Lea is phenomenal because you have a satisfying melee and ranged attacks, a great dodge and block (with the ability to perform a perfect dodge/block), and the enemies are varied and well designed, with many of them having their own quirks that you need to take into account.

Combat in CrossCode is quick, satisfying, and will require a lot of your attention once you get to the multi-phase boss battles against more difficult foes. As you progress through the game, you’ll unlock elemental abilities you can use to counter certain enemies, or even solve various puzzles. If you have difficulty beating a boss, rethinking your strategy or loadout can be the key to victory, because while you can try to out level the enemies giving you trouble, your gear and skill choices make a significant impact on your effectiveness in different areas. 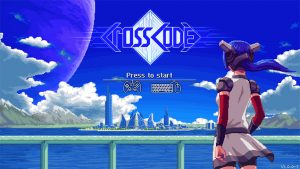 There’s not only a leveling system in CrossCode, but also a skill points system that let you further modify Lea in ways you find most appealing for combat. You can make Lea’s melee attacks gain extra range and do additional hits, you can power up the ricochets on her ranged attacks, acquire new special moves, or just increase your base attributes like raising attack by 10%. Getting a new circuit point can be cause for celebration because it might be something that will make upcoming encounters easier, and there’s enough build and skill variety that you can approach battles in completely different ways, depending on what gear and skills you unlock. 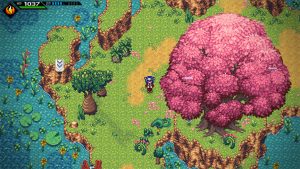 Due to the high mobility in and out of combat, CrossCode is a joy to explore and battle enemies. Enemies you find in the wilderness have their own drop rates, as expected, but many of the best drops will require you chain battles back to back in order to acquire the best items from them. Chaining is as simple as defeating enemies and attacking another before a timer runs out. Normally, you regenerate health after battle, but while the battle chain timer is active, you can only heal through passive abilities or healing items, which means you’ll need to play carefully, as healing requires an animation to complete in CrossCode and you can’t just open your menu and eat 40 wheels of cheese like it’s Skyrim. 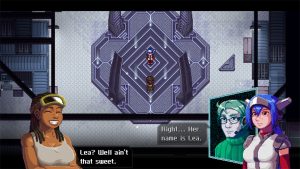 There’s actually a large number of side quests in CrossCode, though a lot of them are somewhat repetitive- one guy, in particular, will ask you to find every location, item, etc., in each non-town map, so expect to see that same quest pretty frequently. Thankfully, the rewards for side quests tend to be pretty great, giving useful gear or chunks of experience. Puzzles also abound in CrossCode, ranging everything from exploration-based puzzles to time-sensitive platforming challenges that require you parkour all around the environment. Late game puzzles tend to be the most challenging, as well, actually making me think that several were overstaying their welcome in an already very long $20 game. 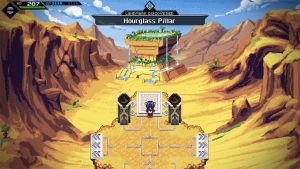 CrossCode is a ton of bang for your buck. If you complete even some of the side quests, you’re looking at 35-45 hours, and more than 60 if you want to attempt to fully complete the game. Should you encounter difficulty with the game, there’s a wide variety of settings that you can adjust to calibrate the game more toward your liking. There are SO many settings options, almost like what Xenoblade Chronicles 2 received in post-launch updates, and it can even make the puzzles a bit easier should you have difficulty with them. I left everything on default, but the extra accessibility is a tremendous plus, because while their availability changed nothing for my play experience, they may drastically improve someone else’s. 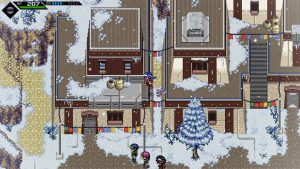 There is also a DLC chapter for the game that helps tie up loose ends from the main story substantially, and gives you a whole new zone, a gigantic dungeon, and raid to play. A good ending is of paramount importance for an RPG, at least in my opinion, and I think that it was a smart choice for the A New Home DLC to directly continue the story of the base game and tie up most/all loose ends, which was my only major complaint from finishing the base game. At an additional 10-15 hours worth of content, I definitely recommend if you enjoy CrossCode, get this DLC as well, as it wraps everything up in a pretty satisfying way. 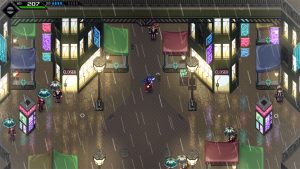 The pixel art of CrossCode looks phenomenal, and every character is animated extremely well. There are tons of little touches all over the world that help it really come alive, so to speak, as while venturing through zones you’ll encounter other characters who parkour around the map, really selling that this world is a kind of virtual MMORPG. The music is varied and quite catchy too, which is important when CrossCode will be sticking with you for quite a long while. 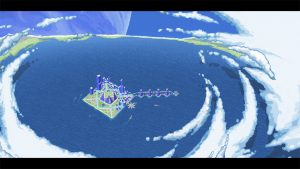 All things being said, CrossCode was definitely a surprise. For three years, I had seen this game and wondered what it was about, but for some reason thought it was a turn based RPG and just pushed off playing it, but I definitely enjoyed the amount of painstaking care that went into crafting the combat mechanics of this game. Some of the side quests toward the end of the game definitely overstayed their welcome, but in terms of sheer value, CrossCode is probably one of the best $20 randomly dropped on a game in quite a while. 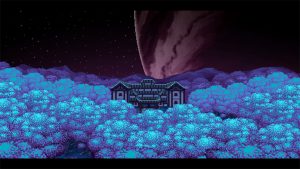 If you enjoy action RPGs with strict dodge mechanics, this might be an excellent one for you. That said, we’ll bring this entry of Save State to a close, and be sure to check back in a couple weeks as I find more random games from my backlog to ramble about for an extensive period of time.