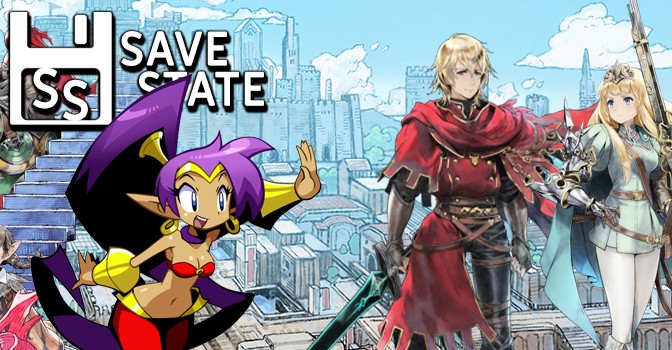 Welcome to Save State, where we belly-dance with the backlog, but nothing will appease it. It is all-encompassing, and its hunger shall never be sated. You may be wondering to yourself, “Why is this bearded, middle-aged man speaking of belly-dancing? That’s not something I wish to be subjected to.” Well, the answer, my confused reader, is because in the last couple weeks I pulled out a Shantae game that I started from back in the day but never finished- Shantae: Half-Genie Hero. 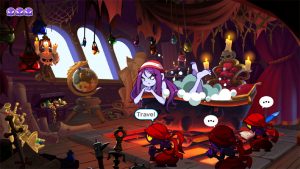 Shantae is a series that has gained a lot of traction in recent years, and for good reason: The artwork and animations are always beautiful and positively ooze charm, and the large, sprawling environments for players to explore tend to heap on multiple reasons to backtrack after acquiring new power ups. Half-Genie Hero is no different in this regard- most Shantae games had incredible pixel art, but this particular title eschews pixels for a hand-drawn art style and it’s incredibly gorgeous as a result. The 2D characters are wonderfully drawn and animated with so much personality- the attention to detail really shows. The game is a side-scrolling platformer where you whip your hair back and forth to defeat enemies, and search every nook and cranny of the levels for hidden treasures that consistently upgrade your abilities throughout the adventure. 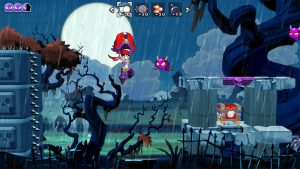 Shantae: Half-Genie Hero would be a game in the metroidvania subgenre category- beating a level is only part of the fun! There’s a decent amount of challenge if you only collect what’s necessary to complete the adventure, but you can scale the difficulty by putting in some time to fully explore stages for collectibles that can boost your attack damage, give you new spells, or increase your amount of health. There are also consumable items that can restore health as well. So, the difficulty can be adjusted by simply exploring more if you happen to find the game too difficult, which I’ve always found an alluring approach to difficulty settings, but for those who fancy themselves belly-dancing experts, there’s a Hard Core Mode that provides additional challenge by giving enemies faster movement speed, higher health and damage, as well as different and additional monster placement (though this can still be managed by exploring and buying items). 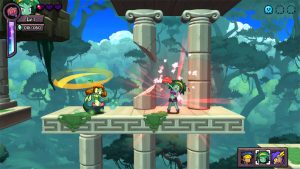 The core of Shantae is that you explore, fight bosses, and unlock different forms through dances that will let you become a monkey that can climb walls, an elephant that can destroy rocks, a spider that can crawl along ceilings, or a harpy that can fly all around the screen. There are several other forms, many even optional, and a lot of these forms change how you traverse a level so you can find secrets or just get through a difficult passage more easily. Various magic spells you can find can also change how you approach combat- you could whip your hair at a boss to kill it like it’s a buster-only run in Mega Man 2, but wouldn’t it be more fun to surround yourself with orbiting scimitars that will slice and dice whatever opposes you? I’m actually asking- I don’t know what you find fun. I don’t know your life. 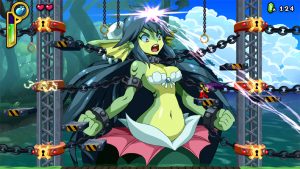 The only certain thing is that I, personally, had a ton of fun with Half-Genie Hero after coming back to it. My personal favorite of the Shantae series is still Pirate’s Curse, as its freedom of movement with the pirate gadgets lent to much faster play than stopping to dance, but Half-Genie Hero is easily my second favorite. You may notice I didn’t talk about the story at all, and that’s largely because the story is window-dressing for the characters to be cute or tell jokes at each others’ expense- it’s quite charming, but not exactly what you’d focus on while playing the game. As for why I didn’t finish it back in June of 2017 when it came out on Switch… it’s because I was still horribly addicted to Disgaea 5 Complete. That time vampire of a game let you grind to millions of HP and stats that could rival any time god. 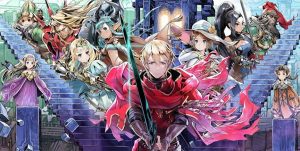 Speaking of time gods, another game that I noticed on my shelf was a copy of Radiant Historia: Perfect Chronology. I originally got this game for my wife to play as I loved the DS original and felt it would be a perfect fit for her, but the combat system didn’t jive with her very much. When this particular game came out, I basically didn’t touch it as I was completely absorbed in playing Bayonetta 1 and 2 again as they just got their Switch release around that time, but I decided to pop the game into my 3DS and see what changes they made to what I thought was one of the strongest standalone RPGs on the DS.

In Radiant Historia, you play as a skilled special agent named Stocke, a man who gets himself embroiled in a time traveling conspiracy in order to stop the desertification of his world. After acquiring an ancient tome called the White Chronicle, Stocke initially has to travel between two timelines in order to save his friends from certain death- and eventually, the world too. It has some very typical JRPG trappings where some small events wind up spiraling into some world-saving adventure, and the tale it weaves is actually quite solid at almost every story beat. The Perfect Chronology on 3DS adds a third timeline you can play through (you can choose to play the original, or the new Perfect mode which interweaves this new timeline into the original story), and also adds an additional character Nemesia who absolutely should have been playable. Seriously, she’s great and would have made a great addition to the main cast, but maybe someone will eventually fix this timeline to correct this grave injustice.

Character artwork has been updated all throughout Radiant Historia, with many of them looking great, while others take characters that were fairly unique in the original DS title and make them more generically anime, but honestly the artwork, even for Princess Eruca, still looks great. Character dialogue during cutscenes now voiced, which helped me realize that a decade ago when I originally played the game, I mispronounced a few of these character’s names in my head.

Oddly, a lot of the possible scenarios from the third timeline were fairly uninteresting. I enjoyed Nemesia as a character, and a lot of these extra bits are side quests sprinkled throughout the original adventure in between chapter breaks, so that you could earn extra experience or equipment. These added events seem fairly disconnected until you reach the tail end of the game’s story where it unlocks a new final dungeon and ending if you completed all of the possible histories. This addition is actually a pretty decent Easter eggs for those who have played the original game, though they’re more fun fluff than anything else.

Progression in Radiant Historia was pretty esoteric, at least at first. Stocke has to overcome a variety of challenges in one timeline, and commonly when you meet a roadblock, the only way past it is to shift to the alternate timeline and acquire the item, skill, or experience needed to not let your friends be slaughtered, or all-out war occur in the other timeline. The method of moving through the story will feel foreign at first, but become second nature as you progress through the game.

Things start off simple, with Stocke traveling with a circus troupe to try and get through a military checkpoint, but you get stopped and captured because you don’t know any circus tricks. In the other timeline, however, there’s a young military cadet you’ve aided repeatedly who has a big heart, but little skill in battle. This boy also just so happens to be skilled in blade dancing- something you can have him teach you after you save him from certain death. Having him teach you this skill will allow you through the original timeline, but you continue in the alternate one until you come across another roadblock, with the urgency escalating seemingly each time. Radiant Historia seems almost like a natural evolution of Chrono Trigger’s brief moments where you’d time travel to get around obstacles, in a way, and that comparison isn’t made lightly. There are also a ton of bad endings that can be unlocked by making poor choices along the way- though generally speaking you can White Chronicle your way back to a checkpoint to try again right after.

Radiant Historia’s combat is also excellent. It’s based on a grid, and characters take turns to act. Enemies will occupy spaces on a 3×3 grid, and using special techniques you can push or pull enemies into one space so you can more effectively damage or debuff entire groups, allowing you to maximize your damage potential and allowing your team to take the least amount of damage. You acquire traps that can be placed on the battlefield, which you can then push multiple enemies on top of for big damage, and a powerful spell caster as well. Delaying your turn to take maximum advantage of enemy states might leave you a little more open to damage, but having all of your characters act as a team to wipe out the entire enemy force in one go is more effective than having one character act on their own (usually- there are exceptions, especially toward the end game).

There have been a bunch of improvements going from the DS iteration to the 3DS version, but you wouldn’t really know that by looking at the visuals of Perfect Chronology. The morphing sprites and environments are still fine, but definitely show their age a decade later. The music, however, is some of the best available on the system, with new tracks made by the original composer. Radiant Historia had one of the best OSTs on the DS, and this still applies to the 3DS version. One theme in particular for a new boss is some of the best sound you can shove into your ear holes.

All in all, Radiant Historia: Perfect Chronology is a strong JRPG as it has an excellent story, a rare type of progression through the narrative that takes advantage of the story’s roots in time travel, a host of interesting characters, a unique combat system, and incredible music. Honestly the only thing holding it back are dated DS visuals which weren’t improved anywhere near as much in the transition to new hardware (though, it’s hard to ask for a ton more when the platform is 3DS). The new additions are generally great, excluding some new character visual differences from the original. Everything that made Radiant Historia a perfect Nintendo DS title is present in the 3DS iteration, and I would go as far as to say that if you haven’t played it at all, this is the one to try. 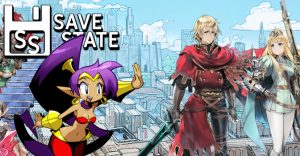 That’s it for this week’s Save State. In a couple weeks, I will undoubtedly have another couple titles shoveled out from underneath the existential pile of wasted time that exists in my back room. The pile has taken over the room, asks that I continue to feed it, and for some reason calls me Seymour. I don’t quite understand why that is.