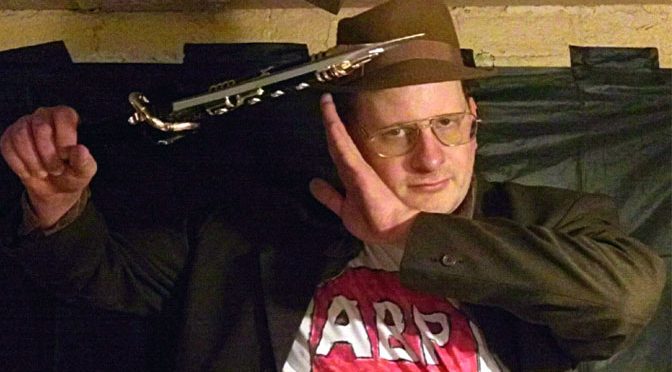 Well…this is it. My final GiN column. And how appropriate that I am writing this on Christmas Day. I guess I can say it is a fitting end to my career, one of which will go on a high note. It got me thinking of someone else who fought to the very end on this day. There was a television show I used to watch called Captain Power. While it was meant to be a show to originally sell toys (most notably vehicles that would respond to flashing images generated by the show as a target practice,) the storyline had a truly adult feel to it. After all, we are talking about a future run by machines (yet not the Terminator,) ruled by what could best be described as a futuristic Hitler.

The series only hasted one season due to complaints from parental groups and Mattel cutting off funding to the production studio, Landmark Entertainments, but it did feature one of the most heart-wrenching character deaths that I ever came across.

And yes, this occurred on Christmas Day (or as the series would have called it, 47 12 Mark 25.) It really makes me wish that the planned Phoenix Rising reboot would have been a reality.

But, let’s not make this article too depressing. After all, this is a celebration of what I’ve been through these last 22 years. Needless to say I’ve been through a lot of highs and lows in my career, but in the end I narrowed it down to five key moments that shaped my career, and I thought it would be best for us to relive those moments once again. Starting with:

If there is anything I learned during 2004, it was that any action I took could easily encourage an equal or more severe, hostile reaction. Case in point, a column I wrote criticizing the hosts of a popular show. I will not mention any names as I have no desire to rehash any of this. But let’s just say the backlash was massive. I received a lot of harassment on my email address to the point it had to be changed, I had various housekeeping magazines sent to my address under vulgar names, and it was just non-stop for several weeks.

Keep in mind this was before I was even on Facebook or Twitter. Heck I don’t think I was on MySpace at the time! It got so bad to the point that I even considered quitting my column altogether. Thankfully our publisher, Nate Wooley, convinced me to stay, which is what I did, at least until today.

Go figure, with the advent of social media, especially Twitter, fanboy vitriol can be taken to a whole new level. I’m sure if this happened in 2015, I might not have been able to survive as long as I did. But these days it seems to be console fanboys who take this to a whole new level. Look up my Xbox Adaptive Controller column for a perfect example of this.

One of the first games I thoroughly enjoyed when I got my PS1 was of course Metal Gear Solid, and it was the amazing voice acting that was a huge factor. Most notably, it was David Hayter’s performance as Solid Snake that ranked as one of the best. A few weeks after I finished MGS, I noticed an eBay listing for an autographed copy of the MGS script. Curious, I emailed the seller and found out it was the real David Hayter, who I emailed about doing a possible interview. To my surprise, a few days later I get a voicemail from David, first in his Solid Snake voice, agreeing to do an interview which ended up posted on our site in its infancy. It was a nice little surprise.

But the surprises continued five years later. Out of nowhere, I get an email from Debi Mae West, who I didn’t know of at the time it was sent, saying that David wanted to speak with me again. We talked on the phone for a short time, and he told me that she was Meryl from MGS 1, though as she was using another name I didn’t know at first. He explained about SAG regulations and why voice actors also use pseudonyms to circumvent the regulations. After our discussion was finished, he sent me a long email explaining his intent to bring back the original voice cast for the GameCube remake of MGS 1 (which eventually became known as The Twin Snakes.)

But as it was in discussions at the moment, in my column I made it very cryptic about where the rumor was coming from, and after sending the initial draft to David to look at, we both agreed that the rumor came from “Snake” himself. Still, it was quite the surprise to know that David wanted to catch up with me again after all these years, and though I haven’t spoken to him since (aside from the random tweet here and there) I was still honored to know that he was there to help me out with my columns.

Before my annual trips to MAGFest, I used to attend an event called VGXpo in Philadelphia. While it started off to be a lot of fun, over the years the quality of the event started to decrease to the point it wasn’t worth going to. But the 2007 VGXpo had its share to unique moments. The first was when I got to interview Zack Ward (aka Scut Farkus from A Christmas Story) as he was promoting the Uwe Boll movie Postal (a movie that Duke Nukem himself, Jon St. John, was shocked to find out I watched before as he was doing a live riffing of it, and I dared to watch it again considering how bad it was.)

But there was also a panel regarding the Spencer Halpin movie Mortal Kombat, and one of the attendees was Jack Thompson, the notorious Miami based attorney and anti-violence advocate. Due to the heightened security of the panel, photography and videography was prohibited. But it didn’t stop me of sneaking a picture of Jack in an awkward pose, covering his face with his hand in what looked like a pure sign of embarrassment.

But the funny part is, and Thompson talked about it during his panel, it was a sign of his eventual downfall, and the following September, he was disbarred!

Still, I really need to head back to Philadelphia again. Maybe after retirement, I should consider attending Too Many Games this June.

If only E3 was the same as it was back in 2000 when I attended it for the first time. I didn’t know what to expect from the event, but after the three days were over, I was blown away. Being able to see the first appearance of the PS2 that would come out later that year, and the first live showing of MGS2: Sons of Liberty was a highlight, but the real highlight was on Day 3 when I had my press meeting with Sega. Being a huge Dreamcast fan at the time I felt like I was treated like royalty, an experience that would never happen to me ever again, especially when it comes to Sega, because one year later, came what might have been my most infamous moment while writing for GiN. And that was…

Let’s just say my love of the Dreamcast back in 2001 was taken a bit too far. Shortly before E3, Sega announced they were ending development of the Dreamcast and becoming a third party studio. Back then I considered it selling out and was furious over the matter. Jump ahead to E3 2001, and again on the last day I had a meeting with Sega. While there were still a lot of Dreamcast games being shown, seeing the first Sega games for the PS2, GameCube and the original Xbox were a very hard pill for me to swallow.

But it was when we were shown Shenmue 2 on the Dreamcast that I lost it. Out of nowhere, I started yelling about how the game would not be coming out and how it would be eventually canceled by Sega. I even went off about how Sega was betraying those who bought a Dreamcast, especially the parents who would be angry about how they (as part of the $94 million in initial sales) would have to end up spending another $300 for a PS2 or Xbox to play their future games. It was getting so hard for the poor PR rep that even my former GiN colleague Ken Urben had to pull me back.

He later told me that I may have went too far with my rant, and to his credit he was right. Shortly after getting home from LA, I sent that PR rep an apology about my actions. She accepted the apology and admitted she was really proud of my passion for the Dreamcast and understood why I acted like I did. She even promised that Shenmue 2 would be released on the US Dreamcast, though I still had my doubts.

And go figure, a week before Shenmue 2 was to come to US Dreamcast, the game was canceled, and only available on the original Xbox to US customers. I wanted to send an email to that PR rep with the headline of “I told you so,” but my inner judgment told me otherwise. I ended up buying the game on Xbox, but it just wasn’t the same.

But still, it wasn’t as bad as Sony’s e-begging campaign to make Shenmue 3 a reality. Sigh.

Well, this is it. I have now reached the end of my GiN career. I have to say this has been an amazing 22 years, and I’m looking forward to the first of Neal Sayatovich’s Skirmisher columns, as a reader and a fan. I know he will do a great job following up after me.

I want to thank everyone at GiN for putting up with me despite all the trouble I caused. As for me, I’m moving on with my life, starting with MAGFest at the beginning of the year and then just playing games for fun.

But still, I will be watching out on social media, because if anyone tries to cry about a game forcing you to pay for microtransactions that are not needed, and a game can be beaten without them, I guarantee that I will return with another Didn’t Spend A Dime column.

But until then, I’m done.

Waiting For: My Future Endeavors

One thought on “Todd “Hardcore” Hargosh Takes A Final Curtain”