About a month ago, I started a new series on my columns called “Didn’t Spend A Dime.” In it, I came to the defense of games that were wrongfully accused of using microtransactions as the only way that a game can be beaten, leading to a perceived “pay to win” situation. Originally this concept started as early last year when both Forza Motorsport 7 and Middle Earth: Shadow of War were treated unfairly for such practices. I have stressed non-stop that Forza Motorsport 7, despite having loot crates, were only acquirable via in game currency, and not with real money. As for Shadow of War, its infamous Act IV was wrongfully accused of being centered around microtransactions, when all I did was play through it in ten hours and beat the whole game without even making one purchase.

When Didn’t Spend A Dime because a series, it was when Assassin’s Creed Odyssey was the latest target brought on by the mainstream media/YouTube ranter hit mob, with false claims of how grinding makes the game level up way too slow, with it taking upwards of 5 hours to go from one level to the next. As you can see in the picture, that is turning out to be a huge lie. 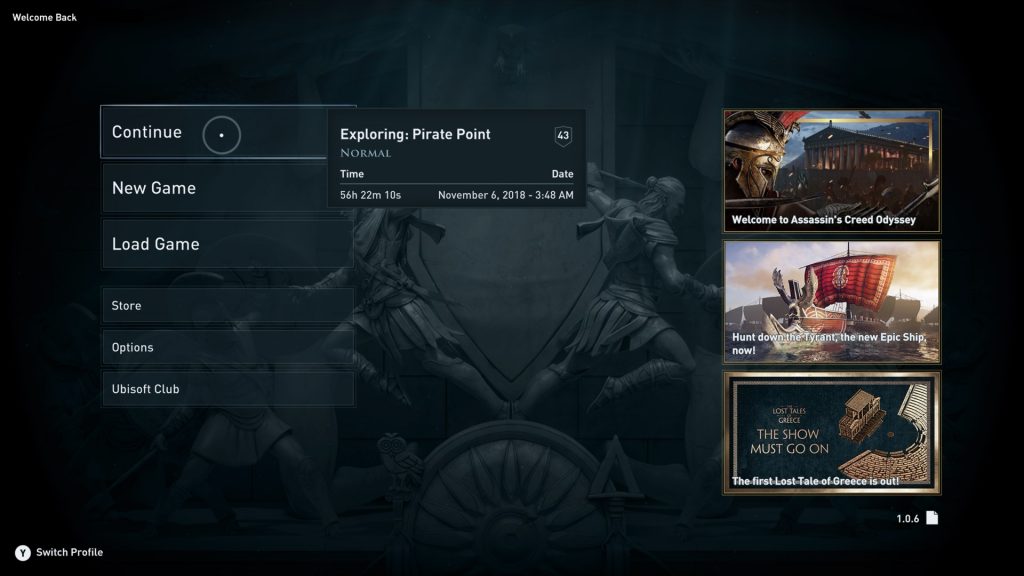 As of this writing, I have played Odyssey for over 56 hours and am currently at Level 43. If these critics can learn to do math, that is an average of nearly an hour and twenty minutes per level. So once again, another game wrongfully accused of “pay to win” has been cleared by me.

However, I am making a change to my series, as I will not support any games that do appear to me to be hungry hungry cash grabs, which at worst case, take the name of a beloved franchise and run it into the ground.

We saw this happen at E3 last year, when Electronic Arts announced that they were finally releasing a new Command and Conquer game. I thought to myself, yes! They are going to return to the glory of games such as C&C 3: Tiberium Wars and Red Alert 3, while making up for the disaster that was C&C 4: Tiberian Twilight. And then…it was shown as a mobile game! Not only was it a mobile game, it played NOTHING like Command and Conquer, but rather a reskin of another game called Battle Islands: Commanders. EA, this is NOT the way we want to see Command and Conquer brought back to us.

But…let’s jump ahead to BlizzCon, shall we? Yup, BlizzCon was last week, and we figured we’d be hearing more about additions to World of Warcraft and Overwatch (which we got in the form of new characters.) But there are those, myself included, who were hoping for a glimpse of something new Starcraft or Diablo related. After all, Diablo III made its debut on the Nintendo Switch by way of the Eternal Collection, so would we be expecting some huge news about a follow up? Maybe a teaser for Diablo 4?

No…we got Diablo Immortal, a mobile exclusive game. Even worse, it is being developed by a company called NetEase who have made similar looking games, only this time they put a Diablo skin on a previous product and are calling it a new Diablo game.

Needless to say, the announcement did not go along so well. One person in the audience even asked if the game would be somehow made to play on PC (which is where the Diablo series originated after all,) and when the developers said there we no plans for a PC version, the boos were quite loud. To add insult to injury, when another person asked if this was a very late April Fool’s joke, he received a ton of applause.

However, another developer thought the best way to respond to the PC question was to insult the audience by yelling “don’t you guys have phones?” Surely, they forgot that as I mentioned, Diablo originally started on the PC, and while I’ve dabbled with both the Xbox and PlayStation ports of Diablo III, I still felt most at home playing the PC version. That is where your core audience is, and that’s what Blizzard seems to forget by releasing this. They didn’t mention anything about a possible Diablo 4 (though reports are saying they had an announcement trailer but decided not to show it) and are making it seem that they are going to make the series online only from now on.

The whole online thing brings up a lot of concerns to me. While we might have other issues such as bad touch controls that will also hamper the viewing of the game, the biggest issue that is almost inevitable is the shadow of microtransactions that will seriously cripple the gameplay, especially if Immortal becomes a “free to play/pay to win” title. And we know how companies like Activision and EA love to get more money by way of those lucrative microtransactions.

The YouTube cinematic and gameplay trailers for Diablo Immortal have only a couple thousand likes but also a couple HUNDRED THOUSAND dislikes! It has also been found online that Blizzard is deleting negative comments in order to make the game look more positive but they cannot fully plug in a leaky dam.

Needless to say this is not the Diablo game I am looking for and I’m deciding not to spend my money at all on it. But, much to no one’s surprise, someone on Twitter had to shoot off his mouth and use this fiasco to support his own political agenda. If you look up someone whose “will” seems to unleash his “powers,” you will see the following tweet regarding Immortal’s negative reception:

Here’s a hot-take: The people that bash on mobile gaming are an offshoot of toxic masculinity. They get off on hating something that they’ve traditionally associated with a heavily female audience.

Ummmm….excuse me? Since when has criticizing a game that deviates from its dedicated fanbase and looks to be a reskin of another game just to rake in those microtransactions be considered an assault by the patriarchy? No sir, I have a hot take for you. I am NOT one in support of “toxic masculinity.” I strongly support a “heavily female audience.” Look up all the posts I made about this, such as my friends and their support of organizations such as the Xbox GamerChiX. I also have nothing against mobile games as a simple time waster, but NOT when they take a beloved franchise like Diablo and use it as a way to leech their fans. That is not “toxic masculinity,” that is criticism, and that is what my job, as a reviewer and columnist, has me do.

Anyway people, don’t listen to what certain critics say to push their own political agenda. Speak with your wallet, as I will, or in this case, won’t do. Don’t get Diablo Immortal. DON’T spend a dime on it at all. Let Blizzard, and as a result, Activision know that you will not tolerate these evil cash grabs anymore and to stop ruining the franchises we hold dear to our hearts for the sake of making money!