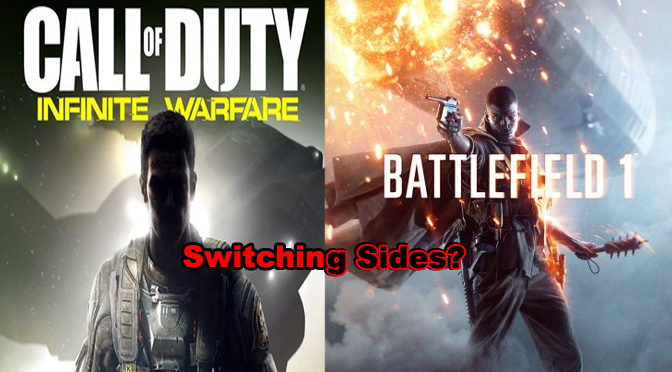 The strange thing about my defending the series is it always felt like a huge summer blockbuster to me, and in actuality, it was. Each new game was a brief experience (usually ten hours in single player) of Hollywood style bombast. Then when it was over, I was done with the game and ready for the next one. I didn’t even play the multiplayer that much because I was not a fan of playing against those online.

On the other hand, that was probably why I was never a huge follower of the Battlefield series. Since it was more of a multiplayer-centric experience with a severe lack of single player gameplay, I was never able to get a good chance to play it. As a result, I notoriously labelled the series as “Camperfield” and criticized all their “honks” as I used to call them for blindly worshipping the series, the same faith that I had with Call of Duty.

However, with this generation, things started to change for me. Call of Duty Ghosts on the 360 left a sour taste in my mouth because of the sequel bait ending, and when I tried to go through it again on the Xbox One, I just couldn’t. I ended up sending it back shortly after the Gamefly copy arrived at my house. And while I did enjoy Advanced Warfare a bit, mostly because of the eeriness that was virtual Kevin Spacey, the game still wasn’t like it was in its glory days. I should have known that future based combat was not what the series was known for, when you fought along a large group of WW2 soldiers against a massive enemy (seeing the masses come toward me in CoD 2 was one of the best highlights in the 360 launch era) and knowing that “no one fights alone.”

But then came Black Ops III, and with its special abilities which felt more like super powers to me, along with the annoying “place go boom” montage I had to deal with over and over again, I just gave up. BO3 was the first game in the series that I didn’t even bother to finish, nor did I care to. It was so bad I ended up putting it on my five worst of the year list last year, and I do not regret it at all.

But I think with what Activision is doing with Infinite Warfare, any interest I may have with the series might be gone for good, and I will never be looking back.

For starters, Activision and Infinity Ward seem to be happy with keeping up with the same old future war formula they have done for the last few years, but this time they are even going as far as adding space shooter combat to the fold. Since when did Call of Duty become Wing Commander? Yes, I love a good space combat game; look at all the positive comments I’ve made about Elite: Dangerous, but this is NOT the series to do that. As if Advanced Warfare ripping off Titanfall with exosuit combat wasn’t enough, this is going too far.

Oh wait, no they haven’t, at least with that. Going too far is what is shown at the end of this trailer…

They are BUNDLING Modern Warfare Remastered with the Legacy Edition! That’s right, for all of those who wanted to play one of the best CoD games again, Activision is forcing you to pay for the $80 Legacy Edition of the game. And you watch, they’ll make an additional change. How much do you want to bet they will make Modern Warfare Remastered a PlayStation 4 exclusive?
No wonder the trailer above has over 1.8 million dislikes as of the time of this writing, compared at nearly 18 million views, making it one of the most hated videos on YouTube. But what about the new Battlefield 1 reveal trailer? How does that look?

Ok, I’m going to admit, though I’m not a Battlefield fan, this looks quite impressive. I never thought they would ever consider going back to World War 1 for their next game, but I’m glad to see it’s returning to something we want. And being able to play it first on EA Access is a huge plus. And yes people, I am going to once again talk about how great a value EA Access is. Just this week alone not only did they add Rory McIlroy PGA Tour to the Vault (with all the DLC courses given away for FREE,) but they also have now given both Battlefield 4 Premium and Battlefield Hardline Premium for FREE. How can anyone claim that this is not a good value for $30/year? *cough* Sony *cough*

Nearly 26 million views for the Battlefield 1 trailer, and compared to the overwhelmingly negative response of Infinite Warfare, this one is universally positive, with 1.36 million likes.
Yes I know this is only a reveal trailer and they tend of over exaggerate what a game will look like, but if Battlefield 1 does keep true to what the trailer shows, then this might be the eventual end of the mighty Call of Duty Empire.

We shall see, especially since Battlefield 1 will have a two week head start, more so if you have EA Access. I might even give it a closer look then.