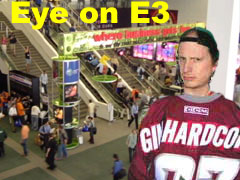 With most of my meetings taken care of in Day 1, I was able to catch up on more titles that I wanted to see. Most of my concentration for this afternoon took place in South Hall, but the first session I had was with Nintendo. Though I still was unable to get a view of the DS handheld (as it was only on display in a theater with a horrendously long line), I was able to get a first hand account of Metroid Prime 2: Echoes.

Since it was the sequel of what I thought should have won Gamecube Game of the Year back in 2002, I had a lot of expectations, and I'm glad to say they were met. Most of the time I spent with the game involved the multiplayer mode (a first for the Metroid series) and it was enjoyable, although it still used the old Prime control scheme as opposed to the standard Halo configuration which would probably work better for multiplayer.

I also had the opportunity to check out Vivendi Universal's booth, where the key highlight was an appearance by Vin Diesel in regards to a game based on his upcoming movie, the Chronicles of Riddick. There were two key titles that VU had that I was interested in. The first title was based on their 1999 cult classic guy movie Fight Club.

Though the first two rules say I cannot talk about this game, I am going to violate them.
The early alpha build shown at E3 looked promising, using Tekken style fight controls, but only two players were playable: Tyler and "Jack." I was told that the finished title will have 10 characters, including a story mode. Makes you wonder if they will do the scenes with "Jack" and Bob in the therapy sessions. Even more so, will Bob still violate Fight Club Rule 6: no shirt, no shoes. (to hide is hormonal man breasts?)

Sony's EyeToy USB camera appears to be getting more accessible lately. In addition to Konami using it for DDR Extreme, I noticed that Crave is now adding it for their flagship title, based on the World Poker tournaments so popular on television. As part of the PlayStation 2's release of the game, it will use EyeToy support in a videoconferencing manner. However, Crave will also be releasing the game on multiple formats, each with online capabilities.

Activision's booth was impressive, centering on their 25th year in the business. The only title I was able to get a close watch on was the Xbox version of DOOM3, which surprisingly looked very good. I never thought that even the Xbox would be capable of making DOOM3 run at a decent speed, but it seems as though Vicarious Visions remedied most of my doubts. Hopefully I will be able to check out more of their titles on the last day.

The last meeting I had today was with Nokia. I didn't think that I would be accepted considering my hostile attitude towards the N-Gage. However, I was able to get my hands on the new N-Gage QD. The design is a step in the right direction, and some of the new games available (such as Sega's Pocket Kingdom) are appealing to those using the N-Gage Arena, but for me to purchase an N-Gage of my own it will still take a lot to impress me. Nokia is moving up, which isn't hard considering its disastrous debut last year.

Tomorrow is the last day of E3, and barring any intrusions by G4 and their immature staff, I will be concentrating on the West Hall and see all the titles that Nintendo and Sony will be developing this year.

Next week my regular column will return, and I will give a complete E3 wrap-up. It will take that long for me to recover. So stay tuned.