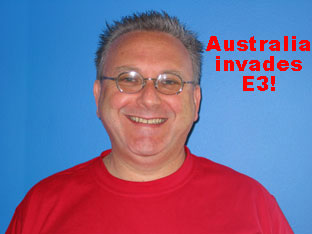 The Developers from the USA can't have all the fun. This year Australia is getting in gear with a major presence at E3. We stopped Adam Lancman, CEO and Managing Director of Atari Melbourne House, one of the largest developers in Australia. With 20 years experience in the game industry, the current president of the Game Developers Association of Australia has a lot to say about the industry, where we are headed, and how Australia will be a vital part of that growth.

GiN: Adam, what trend do you foresee for the global video game industry in the coming years?

Lancman: I believe that most, if not all of the big publishers/developers in the US are going to need help in creating next-generation video games. Today's titles require a staff of anywhere up to 80 people, some even more than that. The PS3, Xenon, etc, are likely to need 120+ people to complete each title. They are going to need to outsource.

GiN: Where do you see Australia fitting in with that trend?

Lancman: I believe many of these companies will begin to view Australia as the best new place to outsource that work and/or develop these new games.

GiN: Really? Why do you say that?

Lancman: Australia features a huge talent pool. Australia may be a small country of 20M people, but due to the convergence of the video game and film industries in Australia, we have the talent and numbers to handle these large projects.

GiN: What would stop a publisher from looking at Asia and/or the Eastern block for video game development?

Lancman: Culturally, Australia is more inline and more in sync with the US and we speak English. Asia and the Eastern block may be cheaper for developing games, but the cultural differences really impact the design process and the language makes it difficult to move at a quicker pace.

GiN: Aside from the large number of available workers, what do you believe will entice large US publishers/developers to outsource in Australia?

Lancman: The video game industry in Australia already has a number of mature, stable, proven developers and we are expanding. Our government is taking a big interest in this industry. That interest has translated into government incentives to foreign companies to setup shop/outsource in Australia.

GiN: Are there any other factors?

GiN: What has been happening with the video game industry in Australia of late that would make people realize it really is viable for video game development?

Lancman: The Video game industry in Australia is growing and is driving its own growth, export earnings of Australian produced video games are quickly surpassing the film industry in Australia. It is stable and secure, as companies here have weathered the global storm while many developers around the world have gone under/shut down shop. Also as more Australian video game companies now work on AAA titles due to larger budgets, you will start to see better quality work and better games.

GiN: Do you see an increasing convergence between games and other creative content sectors?

Lancman: Yes. Increasing convergence between the game industry and other creative content industries is an important emerging trend. It is becoming common now in the US for games to be developed in collaboration with the film industry. Film stars are now increasingly being contractually obliged to record dialogue for games and to participate in additional filming in motion capture studios for the development of their game characters.

GiN: Have you seen this trend in Australia?

Lancman: Yes. A game development team from Atari spent several months on the set of the Matrix movie sequels while developing the Enter the Matrix game. The game uses exact film sets and some scenes are ‘filmed' with the express purpose of inclusion in the Matrix game. And, today, three leading Australian developers are currently engaged in the production of games linked to major film properties.

GiN: What are some of the new titles coming out of Australia this year being show here at E3?

Lancman: Transformers from Atari Melbourne House, Heroes of the Pacific from IR Gurus, Dukes of Hazard from Ratbag, Trick Star, Polar Express, and Jimmy Neutron from Tantalus, Polar Express from BlueTongue, HotDogs HotGals! from Fuzzyeyes, and Ty the Tasmanian Tiger 2 from Krome, to name a few.

GiN: What is your booth location in case anyone is in the area?

Lancman: are located in the West Hall, booth 2001.