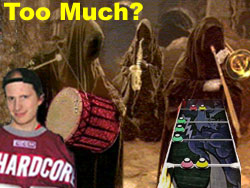 It seems that my vacation coming up has taken over my entire way of thinking. Only half an hour ago did I realize that I had a column due this week. And go figure that something I predicted would happen, turned out to become a reality.

Yes it's now official. Guitar Hero is finally adding additional instruments. With the upcoming Guitar Hero World Tour, Activision, RedOctane, and Neversoft announced that they will add both a new drum set and microphone peripherals to their successful guitar franchise.

I guess we should have seen this coming. (And again people, read my old columns – I did!) Don't get me wrong, Guitar Hero III was a darn good game, even with Harmonix making the jump to EA/MTV Games and releasing Rock Band. But still the almighty force that was RB has taken away some of GH's thunder. It was only a matter of time for a change to take place.

It gets deeper though.

Activision announced something that I've wanted to do for a long time with World Tour. They are allowing players to compose their own tracks and perform them in the game. I'm hoping that if this is true, this will open the floodgates for freely based downloadable content. After all we wouldn't have to worry about royalties or having to get rights to their music. It's an interesting idea, and I really am looking forward to what comes about.

But on the other end of the spectrum, it seems that in a strange twist of irony, the originators of the rhythm game genre, Konami, has officially jumped on the band game bandwagon. Now keep in mind that in Japan, Konami had released arcade games with guitar and drum based inputs. Now while Guitar Freaks and Drummania were huge in Japan, with 15 releases for each title, they are almost nonexistent here in the States, and as I said in my first GH review, Konami dropped the ball with this one.

However last year they announced they were working on Guitar Revolution, but all we heard from it was just the name. There was nothing else until now. And what was it they came up with"?

I'm sorry Konami, couldn't you come up with something more original than that? After all, you guys were the originators! And yes I know the game is very early but the footage that I've seen does not impress me at all.

I know you're using the same flat 2D style track bar that you used for Drummania, but in this day and age it does not cut it. We're used to the 3D zoomed-in bar used in both Guitar Hero and Rock Band. It's time for a change, but then again, if I were you, I'd stick to what you guys do best, and that's DDR.

Look, I know Rock Band is hugely successful. There's no doubt about it. But even with World Tour's unique creation features, do we need all of these coattail riders coming out? I barely have enough room for my Rock Band drum set, do I need to actually have three drum sets lined up in a row? Sorry, but I'll stick with Harmonix's masterpiece.