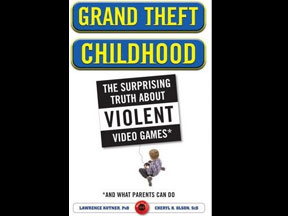 In what will be a surprise to the likes of Jack Thompson and absolutely no one else, Lawrence Kutner and Cheryl Olson, a husband and wife team of psychologists from Harvard Medical, have written Grand Theft Childhood, a book fixated on the influence of game violence and which has landed mostly on the side of gaming.

Again, the book’s findings are apparent to anyone that has looked closely at the subject, plainly stating that if you’re corrupt before you play a violent game, then you’ll most likely be corrupt afterwards, and if you aren’t, then"wait for it" playing the newest GTA release is not going to cause a rapid decline in moral fiber.

Or, simply put in their opening chapter:

"[M]uch of the information in the popular press about the effects of violent video games is wrong."

Gaming violence-along with Movie Violence, Music Violence, Fiction Violence" Really any form of media that produces thought-has always been a cause for public outrage, usually from the most uninformed of people, but if the findings of this team and their sources are correct, there has been hardly any concrete evidence used to pin guilt on the gaming industry, just speculation.

Why then is the increasing call for blood against violent media-most recently that in games-gaining worldwide attention?

Olson and Kutner seek to uncover the truth behind this, determining the amount of relevancy in such anti-gaming claims, while providing their own unbiased judgment on the subject. And believe me, "unbiased" is the key word here.

Their research began after taking an increased interest in how their own son’s gaming habits were forming.

Pitted against what they’d been hearing in the media and in numerous studies on violence in gaming, the idea that their child could somehow become corrupted by gameplay caused a rising concern, as it does with most parents. Should they allow their child to continue playing something that was potentially harming his development? This question set both researchers to task at finding out the truth of such claims.

Creating their own study comprised of the research and dissection of other reports and studies; an assortment of interviews and viewing sessions of individuals that often play actual games; investigations of the checks and balances of the genre; and discussions on political interests in gaming, their findings could close a number of critical mouths if given the correct amount of exposure.

It could also instigate a lot of change.

While this may seem a bit overstated, you’d be surprised at some of the half-hearted ways the anti-gamers approach this subject. In a different direction, GTC’s discussions of the Entertainment Software Ratings Board (ESRB), specifically the way this group has conducted business in the past, is enough to cause any gamer to question the motives of such organizations:

Were they really out to create a coherent rating system, or were these people just collecting a paycheck?

Though Olsen and Kutner’s study shows that the ratings board has changed their methods over the course of time, we can’t help but notice the humble beginnings and the less-than-perfect approach to a system that many parents took as law. Beyond that, we see how those not entirely interested in this form of media move to hinder the universal appeal of gaming.