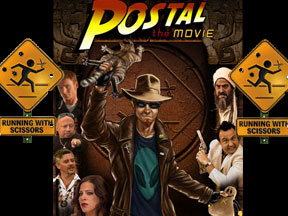 Running With Scissors is the ultimate bad boy company in this industry, giving us the original Postal game which either completely revolutionized the industry or threatened to destroy western civilization, depending on who you ask.

Of course Postal 2 was also shocking and guess what? Postal 3 is right around the corner.

And in May, the Postal Dude (what people lovingly call the main character) is getting his own movie. So before the world goes crazy with Postal Movie Mania, we cornered Vince Desi, who started the whole Postal craze, to talk about where the series came from, where it's going, and just what to expect from the upcoming movie.

GiN: So Vince, it seems like you have been involved with Postal forever. A long time ago GiN was working with your publisher, which at the time was Ripcord Games, when they asked us to help publicize and promote a little game called Postal. So that is how we got sucked into the whole Postal Nation thing back in 1997. But how did you get involved with Running With Scissors?

Desi: I had been in the game industry since the early days of Atari, mostly working as an independent developer on a ‘work for hire' basis making games based on licenses like Sesame Street, Disney, the WWF, and such. In 1996 we decided to create an original, to self fund it, to do our own thing, so I created a new company and called it Running With Scissors, purposely to be devoted to POSTAL.

GiN: When Postal came out, some people really freaked out. I believe RWS was featured on every TV news program at the time, which really seemed odd given the cartoon-like graphics, which seem quaint today in this era of Grand Theft Auto. Also given that the video game industry almost never got coverage from the mainstream media, this was doubly odd. I believe the US Postal Service even sued you, or was that just a rumor? Anyway my question is, did you anticipate the controversy the game would stir up or did it catch you completely by surprise? Or, was this your goal from the beginning?

Desi: Surprise, surpise, surprise. Seriously I had no idea it would cause the insane reaction that we got. Since we were a small company with limited funds, all being spent on talent, the PR was whatever we could create and run with it. We had no intention to reach out to the mainstream media. We just got hit like a firebomb from the Postal Dude.

GiN: From 1997 to 2003 we did not hear a lot from Running With Scissors, though we were as excited as everyone else to learn about Postal 2 when it was ready. Is it safe to say that RWS is a single product developer at this point? Are their any plans to do anything other than a Postal-type game? Any karate fighters or RTSs in the works? (just kidding about the karate fighters)

Desi: After all the excitement of POSTAL, we took a break and actually started working on two new originals. Again we were self funding them, but one was canceled by a publisher, so I decided to cancel the other. It was a MMO, way ahead of its time. We could never have completed it without funding. We actually started to rebuild the gopostal.com site as a comedy content site, and then we decided to start on POSTAL 2.

GiN: When Postal 2 came out, obviously you must have been ready for the controversy that it generated based on the original. Although by then games like Grand Theft Auto were on the scene and violence in computer games was a little more common. Was the fallout from Postal 2 less intense than when the original was released, or am I figuring that wrong?

Desi: Yes and no. I mean nothing could compare to the heat we took from the original. I remember getting a phone call from someone in the UK telling me they were working on a game that ran people over. It was the original GTA developers and they wanted advice on how they should get it published.

I told them they had two choices, they could find a big publisher and take the money or prepare to go it alone like we did. I'm glad they chose the former.

But Postal 2 had its own unique twists, mainly pissing, and this got a lot of negative attention. The fans loved it, and in Japan you can do all kinds of things, even today on the Wii, but these games just don't make it here. Our society in America, is far too hypocritical, not to mention blatantly corrupt. Freedom is a moving target, but the artists are always a fixed target.

GiN: I know you travel to shows like IGRO in Russia and other international venues. Are the attitudes about violent games in those countries similar to the ones in the US, or can you release games outside of the US with less controversy? Are any places worse than the US?

Desi: Russia for all you hear about Putin and the Cold War returning, is really a very open society, as long as you keep your politics to yourself. Socially it's very current, much less stuck up than here. Same with most of Europe, Germany aside, and Japan is great, anything sexual or violent goes.

Of course there are countries like Singapore and New Zealand. I can't imagine living there unless you're a fat slob with a beard, then you can get away with anything.

GiN: Did you ever have any personal contact with anyone who was leading the charge against your games, like Senator Joseph Lieberman or Jack Thompson?

Desi: Yes, I once attended a rally for Sen. Lieberman. It was a shameful event. I got my photo taken with him, HA! Never met Jack, had a few emails from him, nothing more.

I was pleased to see Sen. Obama's comments on video games, and the responsibility of parents, very smart and insightful.

GiN: Of course I want to talk about the movie, but before that, what is the status of Postal 3? Will it be gracing us anytime soon? And can we expect it to push the envelope the way Postal 2 was a leap from the original?

Desi: We are heavily into the development of POSTL III. It will be released next year in the summer/fall. POSTAL III will be our first game on console, on Xbox 360 and PS3, and PC/Mac as well. We are moving ahead as a TPS, with new twists of course. It will be heavily comedy based, more obvious than previous Postal games, and we are working with several celebrities to mock it up just right for the level on insanity our fans expect.

GiN: So, the movie. Were you involved in the process right from the beginning? Did you try to push Postal into a movie or was it a complete surprise to you that someone was interested in making the Postal movie experience?

Desi: Shortly after POSTAL 2 was released we were approached by a few companies in Hollywood, but they were "all rights" or nothing, so we had no interest.

Then we got a call from someone representing Uwe Boll. I flew up to Vancouver where he was shooting, we had a very good understanding and respect for each other, so we took a shot. I know a lot of people will think I'm delusional, but seriously, he made his best film with POSTAL. It was his decision to make it a comedy, and it worked. I've sat with audiences during test screenings and they went wild.

GiN: Obviously director Uwe Boll is controversial. Some of his movies like BloodRayne have been pretty good, but others like Alone in the Dark have failed to capture the spirit of the video games they were based on, according to critics. What do you make of all the Uwe Boll controversies and more importantly, how do you think Boll did with the Postal movie?

Desi: Like I just said, we are very happy with the final version of the film. It's his masterpiece. POSTAL is what we are all about, insanity with humor, a lot like the human race.

GiN: Working on a movie must be a lot different than working on a video game. Were you given any input to the movie to make sure the flavor of the game came through?

Desi: Yes, from the very beginning. We submitted our own treatment. It was very violent and sexual. I'm very glad he took what he wanted from it, but made it into a comedy.

GiN: What do you think of star Zack Ward's performance?

Desi: He's a funny guy, so it works, I think Chris Coppola is amazing too, he had me laughing all the time.

GiN: If Postal fans come out to see the movie, are they going to feel they got their money's worth? Can you promise them a good time?

Desi: Promises are for politicians, not for developers. I do believe that most people who see it will enjoy it, not just gamers, or Postal Fans.

GiN: When does the Postal movie release?

Desi: MAY 23, maybe at a theatre near you? Call your local theatre and tell them "I WANT TO SEE POSTAL ON THE BIG SCREEN!!!"