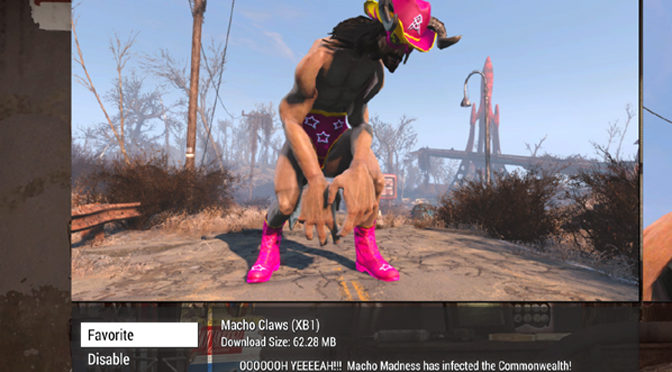 Ever since going back into the realm of PC gaming, a lot of people have recommended that I look into adding mods to my games. I admit I really wasn’t a fan of mods to begin with, as I always felt that I wanted to finish a game in its original state before diving in, and nine times out of ten I would never get those games finished. Then there are the so-called “high definition texture” mods which gave me a fear that the modded game would not run at a decent speed on my modest laptop. But in time I went through multiple playthroughs of Civilization V and Beyond Earth, and with adding mods to play as other civilizations or game settings, and I started to get hooked.

But just last week, I finally had my first taste of console based mods. More specifically, Bethesda kept their promise about adding mods to the Xbox One version of Fallout 4, with the PS4 getting them a month later. After being not truly interested with Wasteland Workshop (though adding monster cages at Sanctuary helped keep my settlers alert) and the depressing climax to Far Harbor, I was hoping to add a little more spice to my Fallout 4 experience and mods looked like the way to go. And for the most part, I am very happy with the way they have turned out. In fact, for those who want to get started in the modding craze, I went and handpicked my five personal favorite mods that have come out in the first few weeks. Be warned though, these are from my Fallout 4 mod experience, so I will have to say your mileage may vary when it comes to your mod experience. 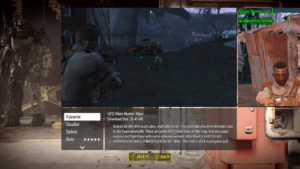 If you played Fallout 4 as much as I have you may have located the crashed alien UFO, which led to a cave where a single alien corpse lay next to an Alien Blaster. And I’m sure you were like me, used the Alien Blaster a lot until it ran out of ammunition and then sold it to Arturo for a huge profit? Well time to add more living aliens to hunt down, more UFO crash sites, and even a UFO crash site settlement to build upon. Why not add more UFO based lore to the Commonwealth? Anything that adds more things to do and explore is a huge plus to me. More on that later. 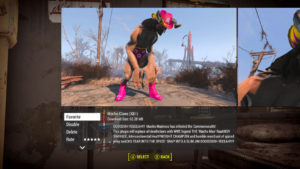 This one originally was used in Skyrim, though as I was playing it on Xbox 360 at first I never had a chance to experience it. In that game, a mod changed all of the dragons to have the face, and even more awesomely, the voice of the late great “Macho Man” Randy Savage. That mod is now back, but instead of dragons, it turns all the Deathclaws into the Macho Man! This is a mod that is not only hilarious, but will never get old. Maybe now that I’m playing through Skyrim again on the PC, I might have to do the dragon mod. 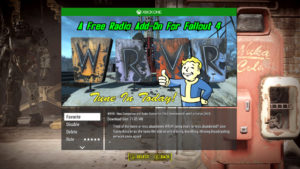 One thing I’ve always loved about Fallout are the radio stations, even though after playing for over six days of game time they start to get very repetitive very quickly. Thankfully there are a ton of other radio mods that I have added to my game (one is even based on the K-DST station of Grand Theft Auto: San Andreas. Imagine playing Free Bird while hunting down Super Mutants!) But there was always that ghost town of a radio station called WRVR that didn’t even play at all. Not anymore, as not only does it now play new tracks, but its DJ, Casey Kessler, can be used as a companion. 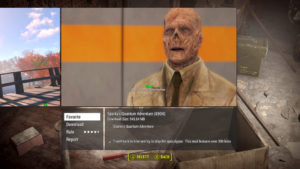 And now we get back to what I said about having more exploration. Here we have a whole new quest that brings up a form of Terminator lore, asking what if you could go back in time and stop those responsible for the bombs falling in 2077? This mod finally allows it with a few extra surprises added in. Be warned, the voice acting is quite hard to hear, and the file size is massive (over 1 GB, which takes up over half of the data limit allowed on the Xbox One) but thankfully after the amazing experience is over it can be uninstalled and it will not ruin your mod experience. Still, it is something I’d love to see more often in mods, expanded quests. 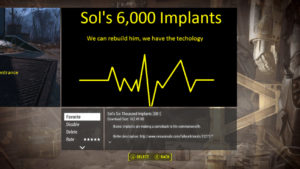 Now this is the type of mod I want to see! What starts off as a simple fetch quest to obtain a holotape turns into a bionic enhancement center right next to Vault 111. From here, for a cap fee, you can increase any status on your body that you see fit. More AP, faster healing, larger carrying capacity, improved VATS? You name it, you can install it provided you have the caps for it. No more having to wait to level up and deciding on a single perk to improve to make your character stronger.

Now, if only they would also make a bionic enhancement that boosts your XP, almost like a permanent Idiot Savant perk?

Anyway, this is just a start to how amazing the Fallout 4 mods are, and I’m constantly looking on a daily basis to see how many more can be added (despite that damn 2 GB installation cap, please fix that Bethesda.) Let me know if you find any other good mods that are worth a look. You can just let us know in the comments section below and I will try to check them out. I’m curious to see everyone’s opinion on this.

Waiting For: Mirror’s Edge Catalyst (PS4, which the mail still has yet to send me despite Gamefly claiming it was sent out.)