So once again the console gods have struck a massive blow to my gaming experiences, and as of this writing I am currently without my Xbox One X. It really hurts to not be able to play anything for a week or two until it is returned from Microsoft’s repair center in Texas, but I guess I’ll have to make do for the time being. Good thing I have both the NES and SNES Classics modded with a lot of new games, as well as my Switch to hold me over.

But still…I can’t believe I’m saying this but…I want to get back into No Man’s Sky.

Yes, you heard me right. I swear that I’m not going through any Xbox One X related withdrawals. I want to get back into No Man’s Sky, especially with the way the Next update has been.

But let me explain this. I have given No Man’s Sky several chances before. My first experience with the game was on the PC in its vanilla form. Even with all the negative backlash I’ve heard about the game and how limited it was compared to the promises that Sean Murray made to everyone, I wanted to give it a chance. Initially I enjoyed the survival aspects, and when I finally got out to space, I enjoyed it a bit more.

But only “a bit.” After about 10 hours of gameplay, it all just started to feel a bit too “samey” and I got bored with the excessive mineral grinding and having to transfer inventory (which in its original release, was an absolute nightmare.) Eventually I gave up on the game and moved on.

Then last year, I bought a PS4 Pro, and after hearing about the Foundation and Pathfinder updates with all their features, including a bump in resolution and a 60fps mode in 1080p, I found a used copy on Gamefly for only $15 and decided to give it another go. When I got it, I noticed the new base building features and a much-needed shortcut control were very beneficial, but again in about 15 hours I was bored with it, and sold the game, and even a few months later due to financial reasons, my PS4 Pro.

My third attempt of playing the game came a few months ago when I loaded it back up on my PC, this time including the Atlas Rises update. Playing that introduced me to some new story modes and much to my delight, some impressive space combat as well as purchasing freighters. The problem though with the freighters is just like the other ships and better multi-tools in past games, the prices were way too high and constantly having to spend money to upgrade my suit put them out of reach.

Then there was the performance issue on my PC. The game kept freezing up for no reason to the point where I had to reset my laptop and start the cycle all over again. It just was too much for me and I gave up for a third time. 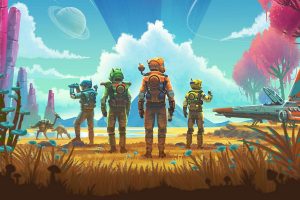 And now we have come to the Next update, and not only that, No Man’s Sky finally makes its Xbox One debut. I ended up purchasing the game digitally (as I had $50 in MS store credits just sitting around and figured “why not?”) Plus I wanted to see how the game handled the X Enhanced features, considering the PS4’s 60fps mode ran well in space but had some issues on the surface.

Well, let’s talk about that first. Yes it did run at 60fps at times, and the resolution was bumped up to 1440p, but I noticed when entering a planet’s orbit, it had massive frame rate spikes. I’m guessing that was from the way the CPU was handling the procedurally generated environments. And even so once I got back up to space and into the station (which would normally go back up to 60fps) it was stuck at 30.

I also noticed that when starting the game over I had to do, as Yoda said.

Elements have taken on a whole new term here. For instance, refueling my ship’s launch thrusters used to require just obtaining plutonium. But now I had to make fuel by building a metal plate (now using Ferrite Dust instead of plain Iron) and mining 25 units of di-hydrogen (a new element to Next.) It took some getting used to, but in time it became second nature. Same for getting newer materials by building a portable refinery to process them. It became part of my standard operating procedure. But the strange thing was, despite these new changes, I never got bored with the game. I was even able to get my first freighter (which is given to you after a rescue mission) and was able to delegate a crew out to perform other tasks.

But then fault number one occurred. One night as I was playing, my online status kept cutting out. Most of the time it resulted in another sign in and everything booted up fine. But then I got a message saying, “Network Connection Lost.” From there, when I logged back in and loaded up with my game, I was greeted with the white “Initialize” screen. Yes, my entire save was wiped! Twelve hours of work down the drain. 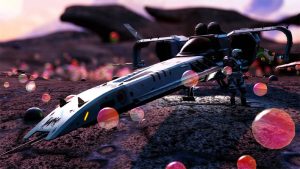 On the bright side, with the experience I gained from playing I was able to improve on my start, and lucked out by finding an even better multitool than I already had. Also upgrading my suit was much cheaper than before, more so when I was able to repair suit stations and get a free upgrade as a result. Jump ahead 10 hours later and I am back to where I was before.

And then the HDMI port on my Xbox One X goes belly up!

At first, I noticed some sparkles on my display, and then the image kept blanking out. At first, I thought the issue was a bad HDMI cable, and tried four different cables, all with the same response. I then thought it was the HDMI port on the TV I tested (a 1080p this time, not my Sony 4K,) same issue. Lastly, I tried another TV, and again, same issue.I ended up contacting Microsoft and found out that I needed to send in my Xbox One X for repair. Thankfully as the X was just released in November, it is under warranty so I don’t have to worry about any charges. But still, being without my console for a period of time is going to hurt me, especially considering how much I’ve enjoyed the No Man’s Sky Next update, and want to get back into it. Sure I can play it again on my PC but I just hope I still don’t have the lock up issues that plagued it pre-Next.

Oh well, back to the classics for the time being.