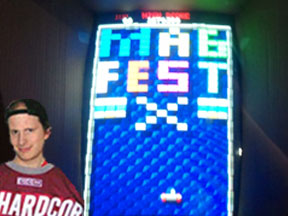 I have to once again say, when I went to MAGFest last year I was a bit more than disappointed. While it was a great show and I enjoyed myself, there were some issues that really needed to be addressed. Most of them had to do with the venue it was located in: the Hilton Alexandria Mark Center. There were power issues, the network connectivity problem prevented me from getting videos uploaded, and of course, the dreaded elevator parties.

Plus there was that 3,000 attendee cap that resulted in people being turned away.

Needless to say, MAGFest just got too big for the Mark Center. It was time to move on, and that’s what they did. This year’s event took place at the Gaylord National Harbor, and what a change it was. Needless to say this year’s MAGFest was massive, so massive I wasn’t able to catch everything. But thankfully my Gamer Geeks co-host Kelly Adams was there to catch what I missed.

What I did see was amazing. Even material that I came across that was not gaming related was a lot of fun. In fact, I want to make a list of the best elements I took from this year’s MAGFest:

1. NO ELEVATOR PARTIES! One of the biggest criticisms of last year’s MAGFest was the elevator parties that ended up breaking them. This year security was much tighter and those dreaded parties were never to be found. There was still tons of chaos and drunken debauchery, some of which affected someone we know real well. I will get to that later.

2. JON ST. JOHN: MAGFEST PATRON SAINT! Ok let’s make that later thing take place now. Jon St. John IS MAGFest. Not only does he take part in numerous panels, he makes sure to stay close to his fans, even going as far as attending their parties. Even Kelly had the opportunity to party with him (lucky girl.) But the next day, he admitted to partying too much, and in one panel said that every time someone did the iconic Colossus roar (which thankfully was far less common than last year,) he said a part of his soul was gone. But then he recovered and was back to his wild and crazy self. Couldn’t have taken him any other way!

3. EVEN NON-GAMING OR MUSIC PANELS ROCKED! Sure MAGFest might have a bunch of panels for those who enjoy games and music, but there were other panels I attended that were just as awesome. Whoever thought a panel discussing what the greatest movie ever made was, and why it was Die Hard, would be so entertaining? Then again, when your panel includes St. John and Stuttering Craig from ScrewAttack, what do you expect? I never even knew someone made a death map of the exact floor every terrorist was taken out, nor was there a great fan based theme song of the whole series.

Then there was the "Revenge of Atop the 4th Wall Live." I’m a huge fan of Linkara’s comic book show, and the live version was great. The target comic used this time was the propaganda piece "Johnny Turbo," a comic insert placed inside issues of Electronic Gaming Monthly magazine to promote the TurboDuo, a hybrid system combining the original TurboGrafx-16 and its CD drive add-on. The comics blatantly attacked Sega (or in their case, Feka) with many blatant and outrageous claims. It may have resulted in fanboy rage when I was in college, but now I look at it and find them to be hilarious, as did Linkara in his review.

4. A NEW MEME APPEARS! The Colossus yell…it’s a MAGFest tradition, only because of the 6-player X-Men arcade machine that is always there. In fact this year they added a SECOND machine to go along with it. But now thanks to Skyrim, and voice actor Wes Johnson being in attendance, the Unrelenting Force shout of FUS RO DAH has taken over. Could we have an epic battle of the shouts next year? The world might not be ready for it!

5. MEETING OTHER REVIEWERS! I already mentioned Linkara and Stuttering Craig earlier, but there are many other reviewers that I was happy to meet up with, and discuss how to make our reviews better. Some even remembered me from MAGFests past. Case in point, Derek Alexander, aka the Happy Video Game Nerd. When I met up with him at registration, he even went as far as offering to re-record a bumper he did for GamerGeeks two years ago! Now that’s commitment!

6. THE ROCK BAND OPEN STAGE RETURNS! My favorite event of last year’s MAGFest was the Channel Awesome Rock Band Open Stage. This year I helped them take it one step further. Since my favorite reviewer, Spoony, wasn’t attending this year, a couple of friends and I came up with an idea. One month ago, his theme song, Break Me by the Irresponsibles, was made available via the Rock Band Network, and we decided to perform it in his honor. Even Linkara recorded some video for us, and it was a lot of fun. I do hope they do it again next year.

7. THE CHILD’S PLAY AUCTION! I admit that I did not get to attend the auction because of the previously mentioned open stage, but there was something in the auction that needs to be mentioned. As many of you know, Final Fantasy composer Nuobo Uematsu’s band Earthbound Papa’s were the headliner concert for the event. Of course, not being a Final Fantasy fan, I did not attend it.

Now I know what you’re all thinking. "Oh great, here we go again with the Final Fantasy bashing." No, I am NOT bashing anything this time. What I am about to mention is astonishing. A Japanese Final Fantasy I cart signed by Uematsu was part of the auction. In the end, the game sold for $1,525!!!!! Yes, this rivals the prices going for a boxed NES Stadium Events and the NWC! Even better, MutatedWaffle, the auction winner, was awarded two Super Supporter Badges for next year. He so deserved it! Wow!

There was only one thing I did not like about this year’s event…it was the fact it had to end, and I had to say goodbye to many new friends that I met. I know I will see them next year, as I am already planning to return. The MAGFest guys really made up for last year with a bang, and next year might be even better!

And still today, almost one week after the event starts, I’m still not suffering from Con Plague. Let’s hope I did not just jinx myself…

Currently Playing: Nothing, as I’m still recovering from all the awesomeness.

Waiting For: ASUS to get off their butts and make the Transformer Prime table in normal inventory stock. What is taking you so long? It was supposed to be out the 19th of last month!