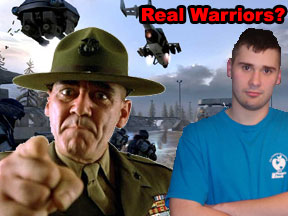 I want to start out by saying this article is not intended for debate purposes. I don’t want to poke anyone in the eye. This article is merely for mentioning some differences I found interesting. Now that we’ve got that out of the way, I want to bring up two groups of people. The first being the virtual warrior (or Xbox ranger). The second are the actual warriors in the military.

I noticed this sitting with my cousin Dakota and my good friend Jason. There are misconceptions and differences that made me chuckle a little. One of the most common is referring to the M203 grenade launcher as the "noob tube." For those who aren’t big shooting buffs, an M203 is a grenade launcher that is mounted to an assault rifle, usually an M16 or M4. In games such as Call Of Duty, people who kill high amounts of people with the M203 are referred to as noob tubing. I asked a gamer what he believes the M203 is like in real life.

"It’s a pansy weapon, it’s doesn’t have any downsides," he told me.

The M203 looks great on a video game, but what people fail to understand is that the grenade launcher adds about seven pounds of weight to the front of your rifle (and that’s without a grenade inside) thus making shooting while standing practically impossible. In all honesty, people who can operate as effectively with an M203 as a regular soldier can with an M4 are impressive.

Another one of my favorite things is listening to people who call themselves snipers because they can pull off head shots from long range with a scoped rifle. When, in actuality, if you gave a good portion of these people a real rifle, they wouldn’t be able to hit the broad side of a barn. Or if they could, they would have to have a gigantic scope.

In basic training we were given an M16 with no scope and told to hit a target at 300 meters (328 yards). That’s difficult enough, let alone trying to pull off a shot from a half mile away, scope or no. And almost no game takes into account the direction of the wind and all the mathematical calculations that go into making a real shot with a sniper rifle.

These misconceptions among gamers continue to add up, like replacing the ammo belt in a heavy machine gun. People complain about how long it takes, when it actually takes your character about a third of the time as in real life, even for professional machine-gunners.

I’m not trying to insult gamers, but sometimes there needs to be a minor reality check. Most military people (myself included) get annoyed when we hear lifetime gamers claiming to be warriors. I may not have been an Army Ranger (I was only Finance Corps) but I’ve shot weapons ranging from the M16 to fifty caliber mounted weapons. I’ve even thrown live hand grenades, and trust me, they don’t look like much on a video, but I felt my ribs rattling through a concrete wall just from the concussion.

These are just a few of the things that gamers don’t realize by playing Call of Duty or Battlefield 3 all day. There is nothing wrong with it, but just know that things are a lot different in the real world.