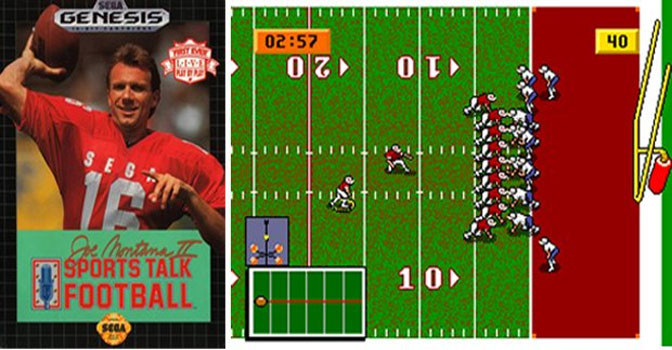 Ok people, I admit that I play Madden. That’s not a huge surprise. I play each and every annual release as it comes out, and I’m not ashamed to admit it. I enjoy football a lot, and I’m sure that will label me at “dudebro” status (double that since I enjoy Call of Duty as well.) But I don’t care. Aside from a maybe one or two years since it’s launched, I’ve played every Madden game that has been released, and I will admit, last year’s Madden 15 was one of the better releases; no doubt it made up for the disappointing next gen debut the previous year (one that I might not have experienced if it wasn’t available for free on EA Access.)

And yes, I know there are those out there who still worship NFL 2K5 as one of the best football games of all time, a claim that I strongly disagree with. Before you all say it’s because I’m a Madden fanboy, it’s not that; my favorite football game of all time will always be Tecmo Super Bowl. But yes, I will be honest with you, I did NOT like NFL 2K5. Why is it you may ask? Maybe it was the fact that my defense couldn’t tackle anyone, not before they either break free or drag me for an additional 10 yards before they go down? Or maybe it was because my receivers couldn’t hold onto the darn ball. They would catch it, take one step, and then drop it, sometimes into the hands of a defender. Even adjusting the WR Receiver AI sliders didn’t do anything. It just infuriated me.

But to Sega’s credit, they did some things right. The game’s ESPN-licensed presentation was amazing for the time, and with the exception of Madden 10’s NFL Network integration feature, nothing came close to it. Then of course,, there was the $20 price tag that was near impossible to resist; it also made EA perform a desperation move and obtain exclusive rights to the NFL and NFLPA, basically killing off any third party competition.

Since then, any attempt to make a football game to compete against Madden have failed to compete. The NFL Blitz series might have had the best attempt at success with their League series, which I admit I enjoyed a lot, especially considering the story was written by those who worked on the underrated ESPN series Playmakers. NaturalMotion and 505 Games failed with Backbreaker, a game that was nonetheless praised for its physics engine. Lastly, even 2K Sports (after acquiring the series and its studio Visual Concepts from Sega) tried to recreate past glory with All Pro Football 2K8, but to no avail against the mighty NFL empire.

As a result, Madden has gone unopposed, and unfortunately that means a lack of quality. We’ve seen how competition makes everything better, the best example for me is how the WWE has faltered since the days of the Monday Night Wars. But in gaming, it has happened with Madden, and I’m afraid to say that might happen with MLB: The Show since 2K left the baseball game market. I will admit to you all right now, MLB 15: The Show is the main reason why I bought another PlayStation 4, but I really hope the lack of a competing title will cause Sony Santa Monica to take a slack approach on their game and make me regret buying it. I guess I’ll find out on the 31st, but in the meantime, let’s get back to my football discussion.

A word of warning though, what I am about to talk about is based on rumor, and I will not take any responsibility for what I am about to post. There has been talk of a new football game that is supposed to come out this summer. On the 3rd of this month, on www.operationsports.com, a website I strongly recommend that all sports gamers go to for their recommended AI slider forums, a newcomer poster by the name of MisterFootballSF released the following for us to read:

I’m sorry, but I can’t sit by and watch this any longer. I love and respect a number of people working on this game and having met the man and hung around him a number of times I have a profound respect for Mr. Montana. He’s just a great person. But I disagree with how they’re dealing with the public and how they plan to continue to do so. You just have no idea how long they’re planning to drag even basic info out.

I’m not on the team and I’m not under an NDA so I’m not under any obligation to keep anything I know a secret. There are some things going on that gamers need to know about now, and the way they’ve planned to do these things just isn’t reasonable. What I’m about to tell you are things they literally only plan to tell you about 3-4 weeks before release and I’m sorry, you don’t deserve to be strung along like that. I know you won’t believe me, but I can assure you this is accurate, and in time you will see these truths unfold. I feel you need to know so you can prepare as a gamer (save up money, make arrangements and plans, etc).

– First and foremost, this game will be for XBOX One and PC only. This is why they haven’t mentioned platforms. They’re taking early advantage of the Windows 10 cross-plat tech and the game will be out as part of 10’s 3-month launch cycle in the middle of this year. So now that you know, you can make plans to purchase an XBOX One or Windows 10 if you don’t have one of them already.

– The game is called Joe Montana NFL Football 16. This is an NFL game. First-party stipulations that the NFL has always left open & the NFL’s exclusive relationship with Microsoft allows for Microsoft to have an NFL game. Microsoft Studios is the publisher. Microsoft is deadly serious about gaining ground and winning the console war (doubtful to happen at this point though) and throwing tons of money at incubation and trying to buy new IP that they can turn into big series’ titles is top priority for them right now. They believe this game can be many times bigger than MLB The Show due to the larger NFL fanbase, and because so many XBOX One owners identify as serious NFL fans.

– The game was demoed and it went well. Actually, “well” is an understatement. People went crazy. NDA’s were and still are in place for them. That’s why you haven’t heard anyone saying anything, but a lot of people are having a very hard time because what they seen was unbelievable and it’s been impossible to go back to Madden or even take Madden seriously after that. It’s like, how you felt when you had an NES and you saw Sega Genesis for the first time. The step up in quality is THAT big.

– They put those things up on artforgames in hopes that you would find it, especially the NFL stuff. It took a little longer than initially thought, but you found them eventually, and when they saw you found it they took it all down just as they did when they realized people found their job posting last year. They already had their team in place, the posting was a bone. All of this has been staged well.

– They’re not asking for ideas because it’s an NFL game and they don’t feel there is a lot of room for the type of creativity you’d need in an unlicensed game. When they first started out before iMFL they were considering a non-NFL licensed game and were going to approach dealing with the community differently with polls, a message board, etc. but things changed once NFL was confirmed.

– 2K is involved. Should be obvious from some tweets/re-tweets and comments both Joe Montana and Damon Grow have made. Some tech and manpower was purchased from 2K and is deeply incorporated into this game. – The franchise mode will be able to be managed on mobile devices and it’s really deep.

– The iMFL app was never meant to be released. Its entire production was a prototyping run for its franchise mode and management system with the intent of using it in Joe Montana NFL Football 16. Even the TechCrunch interview was part of the staging. It was brilliant. Everybody bought the staging. So, don’t wait for that app, it’s never coming.

– There are a few important modes. One is a story mode and it’s pretty cool. Think NBA 2K My Player. That’s what you’re getting. -The graphics, animations and AI are all obscenely good and modern. It looks like a game that was built for this new generation, not just a port over from last generation with a ton of sloppy tweaks. The animations are easily the most crisp of any sports game ever made. Comparing the animations to Madden, it’s going make Madden look like a PS1 game by comparison. This is going to be embarrassing for EA Tiburon, like The Show Vs MLB 2K and NBA 2K vs NBA Live embarrassing.

– Expect Joe Montana NFL Football 16 out in Mid-late July. I apologize to the team making this game and to Mr. Montana, but I feel that with just 4 months until release and a reveal schedule that really just strings everybody along unnecessarily, it was only right to tell people the truth so they can be prepared with enough time to act. Again, I’m deeply sorry but I know I’m doing the right thing.

Again, chalk this up as rumor, but if any of this is true…oh my god…

I want to go over some of the highlights of what is said here, and what I think of them.

I really hope that this ends up being something. If it is true, I am sure we will get our first real taste of Joe Montana NFL Football 16 at E3, and if it truly is as amazing as MisterFootballSF says, we’re going to have to see how EA will say or do with the next Madden. Of course I will have the five day, six hour EA Access trial to see what I think of it as well.