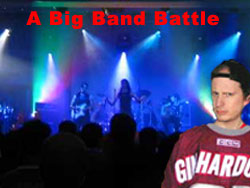 Who would have thought it? I co-write a simple commentary with a friend of mine who uses Guitar Hero to help treat her multiple sclerosis, and it gets a lot of attention, especially from the guys at RedOctane. Hopefully I will be able to write more about this matter, but that story will be told as it develops. In the meantime, I will be looking forward to Guitar Hero 3: Legends of Rock coming out next Tuesday.

In fact, earlier this week I had a chance to play the demo for Guitar Hero 3. I was really concerned about the demo because of the development house shift from Harmonix to Neversoft. Thankfully I can report that despite only being able to play three of the five songs before the demo stopped, the game feels as good as if Harmonix developed it again.

Sure it wasn't the songs I really wanted to play (where's DragonForce?) But it was a good sign of things to come. I'm really looking forward to seeing how Guitar Hero 3 fares, and if Kelly and I will be writing a follow up. Guitar Duel perhaps?

But then there is also the new kid on the block. Maybe new kid is not the right term to use, because it is being developed by our Harmonix buddies. Yes, I'm talking about Rock Band which is running on a sea of hype. Even a hilarious demo featuring a poor performance by former Microsoft head Peter Moore helped to fan the flames of hype.

To think, combining their axe skills of Guitar Hero 1,2, and the 80s version, along with the vocal techniques of Karaoke Revolution, and adding a new drum based mechanic, is a potential recipe for success. How could a game like that miss?

The only thing that might hurt Rock Band in comparison with Guitar Hero 3 would be the price tag. GH3 has the advantage of allowing players (at least on the 360) to use their previous X-Plorer controller and purchase the game separately for $60, or they can buy the bundle with the Gibson Les Paul wireless guitar for $100. PS3 and Wii players will be stuck with having to purchase the bundle (but the Wii one will sell for $10 less).

As for Rock Band, to get the full experience, including the drums, microphone, and guitar controllers, you will be set back $170. The good news for 360 owners who have the X-plorer and a headset: they can be used with Rock Band and the game can be bought separately. However, MTV Games announced they will not be selling the instruments separately until 2008, so anyone who wants to play the drums will have to purchase the full bundle.

And that is what I plan to do, as yesterday I broke my tradition and put $25 down on the full bundle. But I did it with a store that I trust, not the one who screwed me over with the Gears of War incident, and not Worst Buy after the way they messed up the Halo 3 launch.

The better news is that the release date for Rock Band has been pushed up to November 21st, so I won't have to brave the murderous Black Friday crowds.

Now Kelly, are we still on with DragonForce on Guitar Hero 3? I'll be waiting!