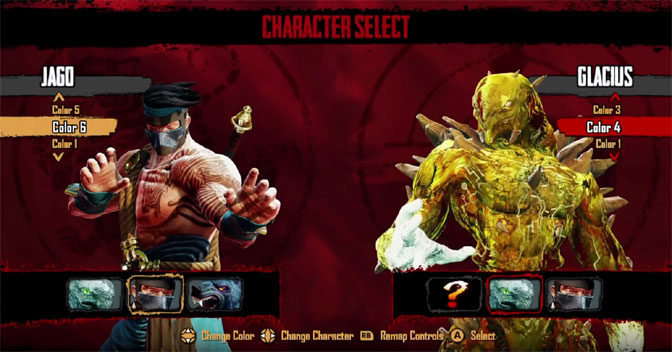 I think you all know this by now…I LOVE the new Killer Instinct.

When it came out, I never thought that an old fighting game franchise, known more for its flash and combo heavy system could be brought back for a whole new generation. Even more, I didn’t think that a development house with such a poor track record would be able to take over what Rare did 20 years ago.

But they did it. Double Helix turned themselves around and won me over with Killer Instinct 2013, and even now, three months after buying my Xbox One and making Killer Instinct my first game purchase for the new console, I am still playing it like it is the first day. Gone was the bad taste of Battleship, GI Joe: The Rise of Cobra and Silent Hill Homecoming and in its place was one of the most enjoyable fighters of recent memory. After suffering from bad fighting games such as Street Fighter X Tekken, Marvel Vs. Capcom 3, and Soul Calibur V (sorry people, I did not like any of those,) I am glad to get back to a fighting game that is just fun to play.

Yes, it is still not complete, as we are still waiting for the last Season 1 character, Fulgore, to be released. (He is scheduled for release with the next update on April 9th.) We are also waiting for Arcade/Story mode to be introduced alongside Fulgore.. But once they are released, it will mark the end of Season 1 of Killer Instinct, and an impressive season it will be.

It will, sadly, also mark the end of Double Helix’s reign over Killer Instinct. As many of you know, Double Helix was purchased by Amazon for a future product, be it a new console or game service. Amazon just announced the Fire TV set top box and that might be what Double Helix might be working on. As a result, they will be leaving KI after Season 1. Since the announcement, speculation ran amok about who would take over the game’s development for Season 2, also if a Season 2 would take place. But now it looks like our questions have been answered.

Enter Iron Galaxy Studios from Chicago. Many of you might be familiar to their past work when they released Wreckateer for the original Kinect, but they are more well known for porting classic Capcom fighters such as Street Fighter III: Third Strike Online, Marvel Vs. Capcom Origins, and Darkstalkers Resurrection for the 360 and PS3, as well as the Dungeons and Dragons arcade beat-em-ups for the same consoles. In addition they have also made their own fighting game with the release of Divekick. Though I have never played Divekick I have seen footage of it in action and it is quite popular in the fighting game community.

But that brings us to Killer Instinct. When it came out, KI was known for having some of the best net code in a fighting game, but since the Spinal update back in late January, there were some issues that plagued online play. The ports that Iron Galaxy have done are also known for their excellent net code, and I’m hoping Iron Galaxy is able to get KI up to that level of excellence again.

Also, I want to see what fighters they will add for Season 2. I know a lot of people really want Riptor to make another appearance, as he hasn’t been in a KI game since the first one. Same with Cinder. TJ Combo also needs to make a huge return in order to complete the original lineup.

But what about the KI2 lineup? What about Kim Wu, Tusk, and Maya? Will they be released in Season 2? Also, what about bosses? While it’s rumored that Shadow Jago (which is already available as a DLC bonus player character) might be the boss for Season 1, will either Eyedol or Gargos return? Or will Iron Galaxy surprise us with a whole new boss? And most of all, will KI2 Classic be available as a bonus?

So yes, there are a lot of questions I have regarding Season 2, and I’m confident that Iron Galaxy will not disappoint us. So yes, the Killer Instinct himself has his own advice for Iron Galaxy…Fight On!