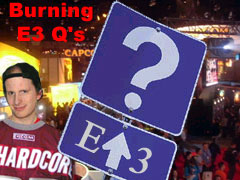 Can it be possible that yet another year has gone, and we are preparing for the insanity that is this year's E3? As of the time of posting, our staff will be departing Dulles Airport en route to the LA Convention Center to experience what will be coming out by this holiday, or even later. As always, we go to E3 with a lot of questions that need be answered, and I was able to round them down to ten that I hope can be resolved in my final report.

1. When will the PlayStation 3 be released, and how much will it cost?

By far this is the biggest concern everyone who wants to buy Sony's new product has at the moment. It doesn't help us when Sony president Ken Kutaragi simply claims that "it will be expensive" and "can't be offered at a price that's targeted towards households." Wow, talk about a way to boost sales, Kutaragi-san! Initial reports suggest that the PS3 will launch at a retail price of $499, but that price has fluctuated to as high as $799! Again who can afford that? I had trouble putting aside $400 for an Xbox 360 Premium Package!

As for the release date, as with most console launch dates, a November 2006 launch seems likely. However, reports of possible system delays have popped up. Could we be seeing another system shortage equal to, or worse, than that of the Xbox 360?

UPDATE: Kaz Hirai has reported that the PlayStation 3 will launch on November 17, 2006 with two configurations. The PS3 will come bundled with a 20 GB hard drive for $499, while a 60 GB configuration will sell for $599.

2. Will the Nintendo Wii be able to survive in the Next Gen World of PS3 and Xbox 360?

First I need to ask this once and for all, what the heck is Nintendo smoking? When they announced they were changing the name of the Nintendo Revolution to the Wii, my eyes popped out of my head more so than even Miyamoto's. Within minutes of that announcement, the Internet was abuzz with inside jokes and criticisms of Nintendo's marketing "genius."

Even I've taken to the ridicule as well. While the system's name is supposedly pronounced like "we," I have been pronouncing it as "why." As in "Why would Nintendo ruin their new console by giving it a name as hideous as the Wii? I saw nothing wrong at all with Revolution; it was a great name for a system. Then again this is the same company who wanted to call their last system the Dolphin.

While we're on the subject of the Wii, I must ask right now about the controllers. Are they really the future of gaming, or is it all just hype? To me it still looks like a remote control, but I also have seen them create a wonderful first person adventure (Metroid Prime) despite much criticism, so I will hold off judgment until then. It will depend on if Nintendo will actually have demo units to play with, and that brings me to my next question.

3. Will Sony actually have playable demo PS3 units on the show floor, or will they wuss out and keep it behind closed doors?

If there is one thing I absolutely hate about E3, it's when companies decide to keep the good stuff hidden from everyone. In the past, the high end products are either viewable in a demonstration theater, or hidden behind closed doors with a Sasquatch-looking rent-a-cop whose only dialogue consists of two words: "Appointment Only."

Last year it got worse, as it was reported that both Sony and Nintendo had their next-gen consoles protected under bullet proof glass, GUARDED BY ARMED SECURITY PERSONNEL! I really hope to God that it doesn't get this bad again, and the fact that the first two hours of the show floor will be open to members of the press only should really help out. No rabid fanboys to deal with.

UPDATE: It turns out that Sony has some grapefruits after all. During the Sony E3 Press Conference, Kaz Hirai announced that the PlayStation 3 WILL be playable on the show floor. While I still have my doubts (thoughts of "APPOINTMENT ONLY" still haunt me,) I'm hoping to get my hands on a PS3 controller when the floor opens on Wednesday.

Ok I will admit, despite being a barebones release, Madden 06 had potential. Not only did the player and stadium models look amazing, but it gave us a taste of what the future of Madden football will be like. Aside from that, most of the initial EA Sports 360 lineup paled in comparison. Only the amazing Fight Night Round 3 could truly be described as "next gen."

Now that EA Tiburon has a full year to work out the kinks of the 360, we can finally experience the true gridiron experience that Madden fans salivate over. And now, with the ESPN license, the game should look even better. Two years ago I predicted that Madden would have the ESPN license added, and I was right, but we also will have the Monday Night Football rights as well thanks to that program moving to ESPN this fall. We had a taste of ESPN when Sega and 2K had the rights to it, despite the cheap gameplay. But now that they are in EA's league, will we finally have a football gaming fan's ultimate package?

And of course, will Shaun Alexander be able to survive the cover curse?

5. What advancement will we see for the PSP?

Despite the occasional round of Lumines or MLB 06: The Show, or a taste of Metal Gear Acid 2, the PSP hasn't really been my gaming system of choice lately. It has however, thanks to the purchase of a 2 GB Memory Stick Pro Duo, become a wonderful travel companion for me to watch episodes of Howard Stern on Demand while riding the Metro or away from my TV or computer.

But if you look on the PSP's XMB operating system, there is a listing for games that can be played right from Memory Stick. Hopefully this year, Sony will offer downloadable games from their site. And while I'm at it, when is Sony going to get off their lazy butt and offer a true Wi-Fi gaming community for the PSP? Nintendo has their Wi-Fi Connection, but why is it that most PSP games are still listed as ad-hoc only?

6. How much life is there in the PS2, Xbox classic and Nintendo GameCube?

When a company launches a new system, people start to wonder how much life is left in their current system. I'm sure the PlayStation 2 can last another year or so, at least until the PS3 price eventually goes down.

Xbox might have a tougher road ahead, since 360 Premium Packages are now becoming abundant in stores. As for the GameCube, again it's too soon to tell, since the Wii does have GameCube controller and Memory Card ports. I'm sure more will come out after next week.

7. Is this the year that mobile gaming will really take off?

In a word, yes. The days of playing Snake on a black and white phone are long over. When I received my LG MM-535 last year, I was very impressed with the vast library of games that were available, and became an instant World Poker Tour junkie. Even further, with EA acquiring Jamdat last year, the gaming industry's giant will give mobile game fans what they hunger over.

8. Will we see any potential in vaporware consoles?

It was the Indrema back in 2000, then the Phantom in 2002, and finally the Gizmondo in 2004. There was always that one console that promises the world, and gives back nothing in return. Along the way we get some hilarious stories, such as Infinium Labs suing Hard-OCP.COM after an investigation of their corporate office, and let's not forget the story of Stefan Eriksson crashing a $1 million Ferrari Enzo on a California public road. Which upstart company will come out this year bringing nothing but empty promises?

Sorry WoW fanboys, but I don't get MMORPGs! How many more hours do we have to spend hunting tunnel worms in order to slowly build up a level? Is this tedium really worth $12.95 a month? I get more for that money from my SIRIUS radio. (Thank you Howard Stern and Bubba the Love Sponge!) And let's not forget all the MMO titles that tried and failed. Matrix Online anyone? Nice big announcement there, Sega. How does it feel giving away your big announcement to Sony Online?

Hopefully the number of MMO titles announced will diminish, but I really doubt it.

10. Since Nintendo claims they aren't competing with the PS3 and 360, who will walk away with the E3 crown?

Microsoft has the upper hand so far. The 360 is out, it is now available, and we are now seeing games that will really show off the system (Ghost Recon, Oblivion, Fight Night, etc.) PlayStation3 has an uphill climb. How will people react to the launch price? Will they defect to Xbox 360? And what about the Wii? Will people be turned away by the weird controller, and will they pay money for downloading old emulated games they can just get online? We shall see.

As always, I will provide daily reports from the show floor, so keep an eye out for what I find. Who knows? Maybe I'll be infamous for breaking the price point of the PS3?