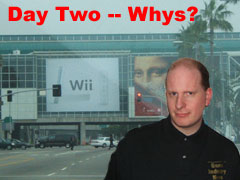 After the initial disappointment of the first day of E3, everything went upwards starting last night. The trip to Santa Monica was a blast, with a party being held at the Arena Gaming Lounge. While most other E3 parties involve big celebrities and loud bands, this event was just a gathering of fellow gamers enjoying all generations of gaming. Primarily involving Intellivision (who sponsored the event, and introduced their new Volume 2 Plug and Play game system,) the night picked up during a huge Guitar Hero jamfest, where yours truly got a standing ovation for my unique rendition of Motorhead's Ace of Spades.

I find it a bit ironic that the night ended up with Guitar Hero, because when I was able to get into the show floor today (actually the rent-a-cops opened the doors a few minutes early,) I met up with RedOctane to get hands on with Guitar Hero II. As if the first game wasn't great enough, how about one with a two player co-op mode? Want one person to play lead and the other to play rhythm or bass? It's now available. The E3 build that I played featured six songs, the most recognizable being "You Really Got Me" as made famous by Van Halen, YYZ by Rush, and much to my delight, War Pigs from Black Sabbath. Then again, after playing the song in its entirety (nearly 7 minutes long,) I was damning RedOctane for re-creating such a hand killer. Again the "made famous by" moniker is back, meaning we will be dealing with the "so darn good you can't believe that are covers", but I was recently told by my RedOctane rep that Primus actually provided their music for one of their songs (and even has the "performed by" moniker as well.)

A majority of the meetings I had today involved peripherals. The first was with Fatal1ty, who introduced brand new gaming motherboards by Abit, a cooler casing system from Zalman, a new Nvidia based graphics card by XPX, and the new Sound Blaster X-Fi from Creative Labs.

Philips is also getting involved in PC hardware. Best know for their Ambilight television technology, they are transferring it over to computer speakers. Featuring computer speakrs that actually glow the appropriate colors, it creates a virual environment that makes the gaming experience real. And since I found out the whole thing will be running on USB, I am looking forward to trying it out on my laptop.
IZ3D also was on hand at the Global Gaming League tournament booth to demonstrate their new 3D based monitors. Using SLI technology, both VGA outputs plug into the monitor to create a stereoscopic effect visible by a special set of glasses. I tested it with Unreal Tournament 2004 and was impressed with the results. Granted it might strain my eyes after a while, but the 3D effect is unbelievable.

Console peripherals were also on display for me to check out. The first company, Fanatec, is releasing a unique steerable PS3 pad. Looking like a normal PS2 controller, the handles can be unlocked to simulate a steering wheel. Two analog triggers have also been added to use when racing similar to on Xbox. I've dealt with other controllers that tried to work as steering wheels, but I think this time Fanatec got it right.

Mad Catz continued to show off their collection of licensed controllers from the NFL, NBA, and MLB, but the first thing I noticed when I went to their booth was their lineup of MLB and NBA 360 faceplates. Now I had a Pittsburgh Steelers faceplace right before the Super Bowl, but I also requested that they would send me a Pirates one as well. (I don't care if they are 10-25 right now!) In addition, they are also showing their Real Pro Golf and Slugger games, both of which use a tracking system that actually reads your swing. Coming out for both the PS2 and Xbox, the technology is quite unique and I look forward to seeing the release.

Nyko also had a lot on hand. In addition to the Intercooler (which I have been looking all over the stores for,) new 360 supplies include a GameFace kit, allowing you to print out a skin to put inside a faceplate harness, and a new Universal Remote. But the most impressive 360 peripheral is the Multi-Reader, which combines a three-port USB hub with a card reader supporting SD, CompactFlash, Memory Stick, and Smart Media. Now why can't Sony offer this as an option for the $500 PS3? As for PSP utilities, on display was a set of Charger grips that function as actual PS2 style handles, and the amazing Play On TV Adapter that allows the PSP to be projected onto any television via RCA cables, perfect for anyone who wants to watch a UMD in a home theatre.

The last meeting was with SNK Playmore, that featured three key titles. Metal Slug Anthology for the PSP will feature EVERY Metal Slug game ever made (1 through 5 including X,) and the original Metal Slug is also coming out for the Game Boy Advance. In addition, the King of Fighter 2006 will be coming out for the PS2. Being based on the Japanese Maximum Impact 2, 2006 will be returning to the 3D engine from Impact, but I have been assured the original 2D series will continue.

During my off time, I was able to check a bit more about the PLAYSTATION3, and though I am still heavily critical of it, I will admit that I was a bit harsh. I did see Warhawk, which looked good and ran smoothly. Also I had a chance to watch the full MGS4 trailer. The story is once again starting to give me more questions to answer. Does Snake kill himself during the story, who is in control of Ocelot (himself or Liquid,) are the Patriots going to show up once and for all, and WHAT THE HECK IS UP WITH RAIDEN? Granted in the trailer he actually looked like a badass compared to MGS2 (maybe it's the ninja exoskeleton he had on,) but when I saw the words "RAIDEN RETURNS," I cued to Darth Vader yelling out "NOOOOOOOOOOOOO" in Episode III. If Snake does kill himself I will probably do the same if I have to play as Raiden again.

With only two meetings left, tomorrow I mop up, concentrating all my efforts on Microsoft and all the titles for the Xbox 360. I will also decide on what I feel is the best of the show and who had the biggest disappointment. It's leaning either to the PS3 for not wowing me plus the exorbitant price or Nintendo for not having the guts to let us test out the Wii first hand.