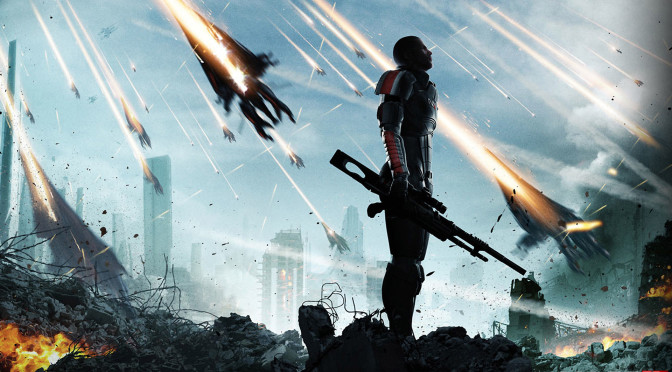 This week has been all about the Mass Effect 4 leaks.  A recent Reddit post featured details of a marketing survey, which seems to unveil key facts about BioWare’s highly anticipated follow up to the Mass Effect Trilogy. It’s no secret that I’m a huge Mass Effect fan, so any information is exciting. In the interests of gamers everywhere (and myself), I’ve pulled out the key details, which could offer us an insight into the upcoming game.

POSSIBLE SPOILERS AHEAD – PROCEED WITH CAUTION

The next Mass Effect game takes place in the Helius Cluster (a cluster of 100s of solar systems in the Andromeda Galaxy), far removed by time and space from Commander Shepard’s heroic acts and the final events of the Mass Effect trilogy. You are a pathfinder, a combat trained but un-tested explorer leading an expedition into the Helius cluster to establish a new home for humanity. As you explore this sprawling series of solar systems (over 4x the size of Mass Effect 3), collecting resources and building colonies, you will encounter the savagery of untamed lands in the form of cut-throat outlaws and warring alien races.

Commander Shepard problem. ME4 is in a galaxy far, far away. So basically, this is a fresh start, with new characters, who essentially don’t have anything to do with the story or the events of the first trilogy. Despite calls from fans to be able to play as an alien, it seems as if the main character will be human.

BioWare always said that ME3 was the end of Shepard’s story and it looks like they’re staying true to their word. I’m happy with this, as it means we get a whole new world and characters to meet.

The other real difference, seems to be that the player character is a coloniser, looking for a new home for humanity. Rather than fighting an epic battle to save the universe, it could be a more intimate story, more akin to Star Trek.

Throughout the story, you will recruit seven distinct crew members to fight by your side. Each crew member has a unique personality and specific abilities that open up strategic options as you choose which two of them to bring into each mission.

Despite this clean break from the original games, the survey reveals a lot of similarities. You assemble a crew of seven and each character has a back story, plus their own abilities, which can help you along the way.

Also familiar to players of the original Mass Effect, there are character specific missions, which can deepen your relationship with them and  open up new narrative and dialogue options. No mention of romance, but I expect it will be there. With fewer people to chat too, hopefully the stories will be more in-depth, tugging at the old heart strings at crucial points.

The survey mentions a character called Cora, who is a biotic with a shield ready to deploy in battles. It also mentions a Krogan, called Drack, so some of the familiar races are back.

However, there are some new alien races mentioned, most notably the Remnant. This is an ancient race and as the pathfinder, you get to investigate their ruins and ancient technology to see if it unlocks anything for humanity. Sound familiar. It’s a bit like the Reapers and the Protheans, which is no bad thing, as BioWare are clearly very good at creating alien cultures.

As you pilot your space ship, Tempest, across the 100s of solar systems that are seamlessly connected in the next Mass Effect, you will encounter new planets filled with valuable resources, intelligent life, conflict, and alien technology that all give you opportunities to increase the power of your character, your ship and your team so that you can build them into a force that perfectly suits your gameplay style.

Collecting resources is also back, but it sounds as if it may be more

interesting, this time around. As someone looking for a new home, visiting planets and analysing their resources is going to be much more important to your overall mission.

The latest information says that resources can be used to upgrade the ship, armour and weapons. This time around, the ship and your characters can be customised to reflect your experience, depending on what artifacts you manage to loot, along the way.

There are also many new features, placing more emphasis on multi-player, which isn’t my thing, but will be exciting to many. There’s something called Strike Team Missions (STM), which can be deployed or active. Deployed missions work a bit like Assassin’s Creed Brotherhood, in that you can recruit mercenaries and send them on timed missions. This means they gain XP and items, while you’re busy with the main missions.

Active STMs allow you and up to three friends to fight waves of enemy in a multiplayer ‘Horde’ mode. The difficulty ramps up, the more players you bring in with you.

There are also Remnant Vault raids. I’m not sure if these are multiplayer or not, I’m assuming so. They basically sound like dungeon crawls. Go in, grab the loot and try to fight your way out.

With the similarities to Dragon Age: Inquisition and a precedent set, regarding leaks via surveys, I’m fairly confident that these details will prove to be true. However, we can’t be sure, so a certain amount of salt should be kept to hand.

All in all, I’d say there’s lots to be excited about, judging by these details. There is a focus on dialogue, RPG elements and character, which gets a thumbs up from me. By creating a smaller crew of playable characters, BioWare can focus on building a strong narrative, which they do so well. There are also lots of multi-player aspects, side quests and distractions, for those who like that kind of thing.

Expect some denial or confirmation of these leaks at E3 and I’m hoping to hear a bit more about who our ‘pathfinder’ is. I’d also like to see some new alien races, as the original trilogy did that so well and we’re in a whole new galaxy, so it would be a shame if they just trotted out Krogan and Quarians, just because they’re popular.

With six weeks or so until E3, in June, it’s just a case of watch this space.