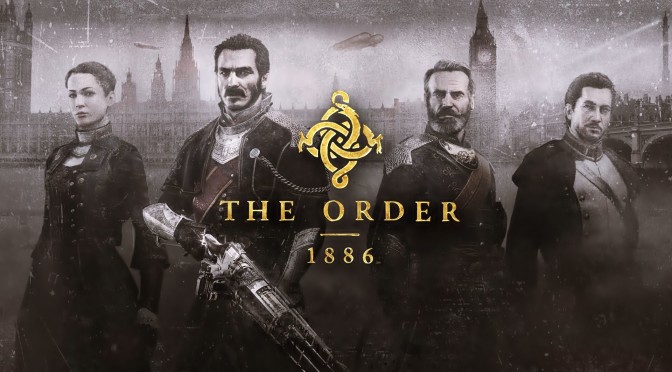 When I saw the trailer of The Order: 1886 at E3 last year, I was excited. A new IP, PS4 exclusive (exclusives being so thin on the ground these days, on any console) and an interesting setting. The trailer hinted at the Arthurian legends and we were given a steampunk Victorian London, swirling with fog and atmosphere. There was a hint of the supernatural and it looked pretty stylish too. All was good, but then the gameplay previews came out and doubt set in.

In a new console generation, it’s the exclusive titles that really throw the cat among the pigeons. Halo always draws people towards Xbox and Naughty Dog is one of the key reasons to own a PlayStation. Exclusives keep things interesting, so The Order: 1886 was a key launch on the PS4 landscape.  But one look at the gameplay reviews and the key word to describe The Order is ‘disappointment.’

Even before the hands-on reviews came in, I was erring on the side of disappointed. The first time I saw the gameplay, I was greeted by a standard shooter with the addition of epaulettes and some fancy guns. I really wanted to love this game, but it was beginning to look like a very standard game that looked very pretty. And it seems I was right.

Before I go any further, let me just say, The Order looks fricking gorgeous. It’s really showing off what the PS4 can do, in terms of graphics and not just that, it’s been beautifully designed. With this in mind, I have to question the decision to throw in QTE sections. Hardly anybody likes them and when you’re playing in such a gorgeous world, they seem a really ugly, immersion breaker to throw up on screen.

This isn’t a David Cage experiment in storytelling, it’s a well-written and elegantly paced (as far as the section we’ve seen goes) game, with a focus on action adventure. So why the QTE?

Once you’ve recovered from the QTE sections, it’s on to some stealth. Never my favourite part of a game, unless the AI is good and the level design is really clever, giving you loads of options. Unfortunately, from what I can glean, this is not the case. Added to that, it’s insta-fail if you get caught by the guards with eyes in the back of their heads.

Probably the biggest disappointment concerns a section where you have to take out a rebel. You need to use the scope on your gun to

identify rebels by finding the one without a badge on their lapel – quite a fun mission and simple enough. However, the game doesn’t trust you to do it on your own, so you are unable to shoot the wrong person and you’re also told when you find the right one. How to remove agency from your player during what could have been an interesting set piece.

When a shooter can’t even get the shooting bit right, something is truly wrong.  Apparently, the cover mechanic is unreliable and the shooting is average at best.  I question the need to weigh the gameplay towards shooting at all, but then that’s just me. Maybe the failures of The Order: 1886 is a warning about the over reliance on shooting as a gameplay option. In this case, it seems to have been thrown into an otherwise highly polished game.

There is absolutely no dispute when it comes to praising just how pretty The Order: 1886 is. There’s plenty of detail, stunning character and setting design, wrapped up in an interesting narrative world. However, I must mention the epaulettes.

that it has a tendency to place style over substance. Why would you have a clockwork corset? And what does that bit of brass do to that gun exactly? In The Order,  the central characters are the knights of Camelot. Apart from their names, we know this because of their garb.

Both Sir Galahad and Sebastian Mallory have chainmail epaulettes, platemail gauntlets and collar pieces. Apart from the additional weight, these offer no protection whatsoever because as we know this is a shooter, not a sword play game. So, the armour is just there to make them look cool, rather than serving any purpose. In fact it would be a hindrance. I don’t know if you’ve ever handled any chainmail, but even a bit that small, is bloody heavy.

The armour is a small point, but it annoys me because it only serves to underline the fact that The Order: 1886 may be offering a lot of window dressing for an otherwise average game.

It seems a little unfair to damn a game,  three weeks before it’s even released. But 2014 was a year of many gaming disappointments, so forgive me, if I’m cautious. I want to be wrong. I hope The Order: 1886 is a great game that tears down all my reservations. And despite my concerns that it’s going to be a bit meh, it’s going to take some willpower to resist the lure of a game that looks that great, in such a delicious setting. I just hope the gameplay isn’t a test of endurance.