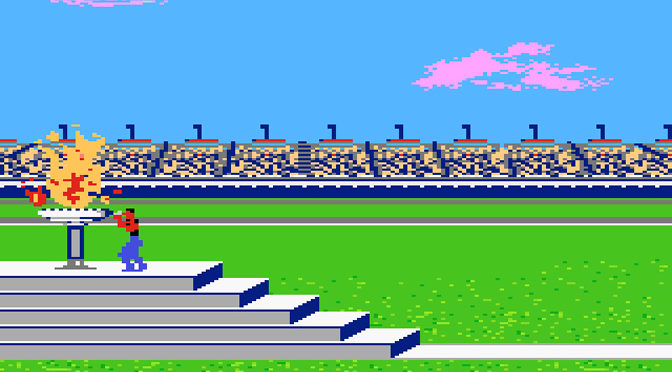 Greetings play chums! I think that is what Chella normally says, though if you were expecting her effervescent persona this week, you might be slightly disappointed. Like Todd last week, Chella is taking some time off, leaving me, your humble editor, to work on her column. At least Chella has a good excuse because she’s a featured speaker at the Nine Worlds Geek Fest Convention this weekend, hosting a panel on race in the context of diversity in videogames. If you are near London, please stop by and say hello!

So back to me. Like everybody else around the world, I seem to find myself catching Olympic fever. I watched the gymnastics events and of course the swimming, and cheered as the USA picked up baskets of gold, silver and bronze medals. But as much as I love watching competition at that level, I love videogames more.

And that got me thinking about all those sports games that I used to play growing up, and how much fun they were. There does not seem to be anything like that too much anymore outside of a few Wii titles, and I’m not sure why. Around my neighborhood, playing some of those classic sports games was practically like an Olympic sport. And they were really hard to medal in too.

The grandfather of those types of games, at least in terms of my playing, was Track and Field for the Atari 2600. I owned an Intellivision which didn’t have too many sports games – though the baseball title was the best at the time – so to play Track and Field I had to go over to a friend’s house. I never really had Atari envy or regret over my Intellivision platform choice, except when they were playing Track and Field and of course Adventure, which was a Dungeons and Dragons type of title.

If you remember Track and Field, the most challenging event was the 1500 meter hurdles. It was brutal! You had to rock that little Atari joystick back and forth in your hand for several minutes. I was like eleven or twelve, and would cramp up while playing sometimes. Then you had to push the jump button when the hurdles came up and it was really hard since you were trying to concentrate on the rhythm of the running. We even tried to cheat by tagging in other, fresh players when the first guy got winded, though the handoff was often sloppy and thus never worked too well. Still, it was a ton of fun and invited a lot of mostly friendly competition among the guys I hung out with.

A little bit later, the game that captured my sports imagination was Epyx Summer Games, which originally came out for the Commodore 64, but which I caught on the PC sometime later. It was a lot more responsive than Track and Field, and featured some really cool events like surfing, which are scheduled to go into the Olympics in 2020. I especially loved diving, which was surprisingly difficult but still a lot of fun. Epix also made a winter games series, but for some reason, I never got into that one, mostly because I never had access to the game. But Summer Games was fun, and even got into interesting areas like acquiring sponsorships, something athletes do all the time these days. I remember that I always used Casio as my sponsor, which was so cool (even if I wasn’t) because it matched my awesome calculator watch.

Enter Activision into the sports arena, and things got serious. They were a powerhouse of promotion for their games even back then, perhaps not to the Call of Duty level that we see today, but they pushed their games hard and were very successful at it. So when they came out with Decathlon, they made sure the world knew it.

They took out ads for the game in every computer magazine that was being published at the time. You see kids, back in the day we had these things called computer magazines and they were actually distributed on glossy paper. It was kind of primitive, but it’s what we had and they were a big part of our lives. Each one of my friends and I took out a subscription to a different one and then passed them around (along with the occasional smuggled Playboy, back when they too had pictures) so that we could afford to see everything happening with videogames, and also girls with those Playboys I suppose.

Unfortunately, the ad that Activision choose to promote the game with in every one of those magazines didn’t do any favors for the image of gamers. It featured a really nerdy kid, I mean this kid was so nerdy that even we called him a nerd, holding gold medals with a slogan about not bothering to watch the Olympics because we could play them instead. Sure it was probably true, but come on Activision, no need to out us like that!

The television commercial was a lot better, featuring Olympic athlete Bruce Jenner. He looks a little bit different today, but check him out when he was the all American track and field guy promoting Decathlon for Activision.

Which brings me to the final reason that I used to love those games: the real medals you could win by playing! Well, not real medals, but something almost as good: patches for your jacket. The cool little iron-on prizes were incredibly sought after in my neighborhood. Remember, this was before eBay or even the Internet, so finding one on the aftermarket was pretty much impossible, especially for a kid. The only way to get a fabled patch was to earn them.

To do that, you had to first get a gold, silver or bronze medal in the Decathlon game, which was no easy feat. Then you took a picture of your screen to prove your achievement – remember this was pre-Internet and pre-email. If you were lucky, someone had a Polaroid camera to save you some time waiting for the film at the developers. Then you mailed the photo into Activision, and they sent the patch back in just six to eight short weeks.

Don’t laugh, because the coolest kid on our block had a brown windbreaker with all three patches down the left sleeve, and one from River Raid on the back, another Activision game with a similar patch offer. How I envied that jacket, and hated the way he used to parade it in front of all us poor non-medal winners. I kind of smirked just a bit when it was later stolen – though not by me – I swear!

Eventually I was able to earn my own patch. It was only a bronze, but it was like gold to me. I never even put it on anything because I was too afraid it would get ripped off too. So I kept it in a box of childhood treasures where it still resides today – along with that cool calculator watch.

Good luck to all of the athletes participating in the Rio Olympics. May you win gold, silver or bronze for all the rest of us whose Olympic dreams are comprised of just pixels and really great gaming memories. But if you should win something, do yourself a favor and don’t parade it around my old neighborhood. Just saying.