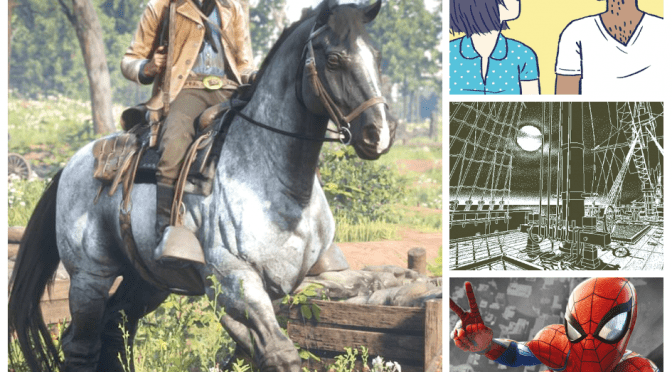 It’s that time again, as another gaming year draws to a close. 2018 will be remembered by games journalists as the year they got sick of mainstream media outlets asking us to talk about how Fortnite is a danger to children. It’s also the year when we forgot that 2017 was the year we all feared single-player was dead because the last 12 months have featured one single-player hit after another (Fortnite withstanding).

Let us not dilly dally any longer. Here are the best games of 2018:

It was always going to be massive and Rockstar didn’t disappoint. This was the wild west epic many had been waiting for with eager anticipation. Even for those who didn’t enjoy the more is more approach, it’s hard to fault the technical achievement of this rich world. Although, it didn’t come without criticism, some just tired of the guns and openworld formula. In addition, instances of red face, when it came to the choice of voice actors, as well as stories of harsh working practices at Rockstar all marred the launch.

Our reviewer said: “If you like open world games, then you wont find anything more expansive.”

The next big sequel on the best games of 2018 list is Ubisoft’s annual  romp through history. Following up Assassin’s Creed: Origins was going to be a tall order, but this was another sequel that delivered more and some say it improved on many of the things set up in Bayek’s story. The jury is still out for me, on that one. This is a big game, so I’ve yet to dive into it enough to give a definitive opinion, but on first impressions it just made me miss Egypt and Bayek. However, that’s not to take away from another incredibly realised world from the Ubisoft team. Many loved the wealth of things to do, but I prefer a bit more breathing space in my games. That said, it’s another flawless entry into the Assassin’s Creed series.

Our reviewer said: ” A magnificent blend of some of the best action RPG games into one “epic” experience.”

I wasn’t expecting to like this game, but it charmed me right from the outset . Not only the best Spider-Man videogame, I’d argue that this is one of the best depictions of Spider-Man outside the comics. Combining slick gameplay with well-written characters and nods for comics fans,  this game was pure joy. Swinging through New York was exhilarating and the seamless combat gave you enough options to ensure you could find your own style and feel super while doing it. More than just an Arkham game in a Spidey suit.

Our reviewers said: “A really interesting game and fun from the start.”

No Man’s Sky Next

It finally happened, No Man’s Sky brought in multi-player with its major update, this summer. Next brought new lifeforms, more weather and different environments to ease the monotony. The only drawback is my existing base was gone, but there are now more things to do and more mysteries to uncover and you can do it with your friends. And the updates keep coming. In 2019, I hope I have enough spare life to get back to No Man’s Sky.

I said: “There’s a lot of stuff to delve into and I’ve only scratched the surface of the surface.”

In the world of mobile games, Florence was a standout title this year. The first game from Ken Wong’s (Monument Valley creator) studio Mountain Games, Florence was the story of a young woman’s relationship with a musician. The romance is written without dialogue, but crafts a tale that explores the compromises we make when we fall in love and move in together. It’s beautifully crafted with an interesting dynamic made for the accessibility mobile offers.

If I’d told you six months ago that one of the games of 2018 was going to be a Tetris game, you’d have laughed me out of the room. But it’s happened, people. From the team behind Rez, Tetris Effect blends everything that was great about both of those classics and makes something awesome, compelling and magical. The familiar tinkling percussion, floating over a pumping beat spur you on to manipulate those Tetris blocks. The whole thing is suspended in some sort of space nebula and in VR it has some next level hypnotic power.

One of the highlights of my gaming year was the return of Life is Strange with a sequel and a new story. It might be cheating to name just one episode as a game of the year, but I’m so excited about this  one I can’t help myself. Life is Strange 2 has a confidence right from the start that makes me feel that we’re in for a great emotional ride.

Return of the Obra Dinn

From the creators of Papers Please, the Return of the Obra Dinn is distinctive in every way. Once again, it uses bureaucracy as its main mechanic, with an insurance official investigating the events aboard a ship with nothing but a magical watch and the ship’s paperwork to go on. The stark black and white graphics hark back to the illustrations in a book and give the game an unmistakable aesthetic, but it’s the mystery and the clever puzzle at the centre of the game that keeps you hooked.

What did I miss? Hit me with your best games of 2018 in the comments.

3 thoughts on “Best games of 2018: cowboys, romance and insurance claims”