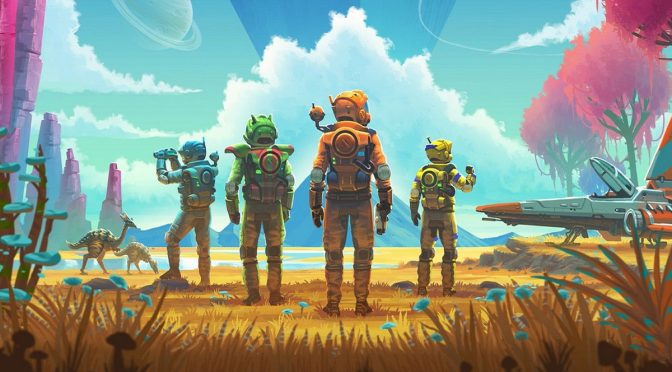 This week, Hello Games released No Man’s Sky Next, the latest update for their space explorathon. This was the big one, when multi-player was finally implemented, worlds became more varied and those long-awaited space battles happened. The game also released on Xbox One, bringing more people into the world of fuschia trees and yellow skies. But is it worth jumping back in, if you hated it the first time around?

The short answer is probably, no. No Man’s Sky Next doesn’t deliver a brand new game. Don’t expect Elite with prettier planets. This is still a low-key, relaxing experience, rather than a high octane, relentless killing spree. If you get your kicks from mowing down hoards of enemies and fast action, this isn’t the place for you. If the combination of hazardously low planet side temperatures and toxic fungus spawn gets your adrenaline pumping or the prospect of building a shelter in a storm is challenge enough, then welcome to No Man’s Sky Next.

When you head up to the space station, head to the new shopping area and spruce up your look. Now you can opt for non-human heads, not just helmets. Even among the helmets and armour there are a range of designs. Don’t expect RPG level of customisation, but you can choose colours and from around seven different styles from top to toe.

On top of the customisation, No Man’s Sky Next includes the option to play the game in third person, so you can actually see how dapper you look.  Interacting with objects isn’t quite as seamless in third person, but I still prefer to have the option, especially for those who get motion sickness in first-person.

I logged into my original save game, but my base was no longer, which is a bit sad. On the up side, base building is now limitless. You don’t need to find an uninhabited building to set up your base. In No Man’s Sky Next you can build anywhere, any number of times. I’ve only built a rudimentary cabin with a windbreaker, which totally wasn’t just a misplaced wall, during my first construction, but I’m looking forward to digging deeper into bases.

when we said unlimited base building… pic.twitter.com/oAbfdu97dB

The one drawback is that you do have to do a lot more crafting, which isn’t really a drawback, but anyway. Crafting is much more central to the game now. You need a refiner in order to convert raw resources into other components, which you then use to build things, such as your base computer – the starting blocks of any base.

Another bonus of multi-player is that collecting resources is so much easier because you can donate stuff to people in your party, making short shrift of gathering.

The graphics have been upgraded, so it looks even prettier, but there are also more variations to the landscapes. I noticed a lot more animals and loads of new plants (including nasty, toxic ones). One of the best additions is the ability to befriend local critters. If you have the right resources in your inventory, you can feed creatures, making them friendly towards you. Creatures that have been fed will have a smiley face icon above them and will also come in for a nuzzle.

Yes, there is now multi-player, but this is no  MMO type scenario. You can invite up to three friends to join you or leave your game open for strangers to jump in. Crucially, you can build and complete missions together, as well as embarking on space combat together.

You can also pull together an entire fleet of ships and become some sort of space Nelson, captain extraordinaire.

I haven’t really dug into the new missions and story lines, yet, but I know they’re there. Apparently, missions are now more varied and you can get your friends to help. And then, there’s the story of the marauding xenomorphs and the whispering eggs of doom, which was enough to entice many back to No Man’s Sky Next.

There’s a lot of stuff to delve into and I’ve only scratched the surface of the surface. No Man’s Sky Next still isn’t the game that some wanted it to be, but it was never trying to be, however, some of the emptiness has now been filled with content and I’m very happy with that.