The international operating multiplatform publisher Immanitas Entertainment announces today the global release for the PC-action-puzzler MonstaFish. The Indie Game has been developed by UK-based team IronSun Studios and is available at all major digital distribution platforms. MonstaFish is a twitch-based, action-puzzle game featuring a series of compelling modes with more bite than a toxic MonstaFish. It features mouth-watering, comic book-style graphics, and a commissioned soundtrack that will have players tapping both finger and foot to the beat of the gameplay. The main task of the game is simple but challenging: Keep the water clean of polluting mutant MonstaFish in four … END_OF_DOCUMENT_TOKEN_TO_BE_REPLACED

The air is thick with incense and prayer as the arch angels of grand strategy at Paradox Interactive and Paradox Development Studio today release Crusader Kings II: Sons of Abraham. Strategy gets spiritual as the divine fifth expansion for globally acclaimed strategy/RPG Crusader Kings II celebrates the three holy Abrahamic religions; Christianity, Islam and Judaism. Power in the name of the one true god is the psalm of the day! The devout are rewarded with a holy chalice filled to the brim with new features, including hundreds of new religious events no matter whether it’s the Bible, Torah or Qur’an … END_OF_DOCUMENT_TOKEN_TO_BE_REPLACED

On Veterans Day 2013, Military Times announced that Full Sail University has once again been included in the publication’s annual Best for Vets: Colleges 2014 ranking. This marks the second year in a row that Full Sail University has received this honor. The following is a press statement released by the Military Times: The organization comprising Army Times, Navy Times, Air Force Times and Marine Corps Times placed a new emphasis on academic rigor this year when conducting and scoring the fourth annual Best for Vets: Colleges survey, a highly respected 150-question analysis of a school’s complete offerings for veterans. … END_OF_DOCUMENT_TOKEN_TO_BE_REPLACED

WarpPortal, known for publishing the online titles Ragnarok Online & Ragnarok 2, has revealed an all new mobile Action- Role-Playing game, Tower of Ascension, being developed by Gravity Co.Ltd. Powered by Unreal Engine 3 Technology, this iOS exclusive game has launched in South Korean and is slated for a North American release December 2013. "We wanted to something extraordinary to bring to the mobile market," stated Jay Choi, COO of Gravity Interactive, "the Unreal 3 Engine helped us do just that, with beautifully rendered graphics, and amazingly smooth gameplay." Tower of Ascension was designed exclusively for smartphones and tablets, with … END_OF_DOCUMENT_TOKEN_TO_BE_REPLACED

Nordic Games has today unveiled the second of three gameplay trailers from the upcoming release of their action-driven first-person shooter Deadfall Adventures, out November 15th for the Xbox 360 video game and entertainment system from Microsoft and Windows PC. The Arctic trailer gives players a glimpse of this frosty region in Deadfall Adventures. As James Lee Quatermain, players brave the icy depths the arctic brings and battle an onslaught of zombies and Nazis, as they continue in the hunt for the Heart of Atlantis. The stunning but treacherous conditions the location brings, adds to the thrilling atmosphere which the game … END_OF_DOCUMENT_TOKEN_TO_BE_REPLACED

HeroCraft have recently released ‘USSR vs USA’, an add-on for their popular ‘Strategy & Tactics: World War II’. The Generals, having gone through the trials of the recent war, now lead armies on the battlefields of an alternate reality! http://www.youtube.com/watch/?v=PrVFEHboG5c Developers: Herocraft Games Platforms: Android 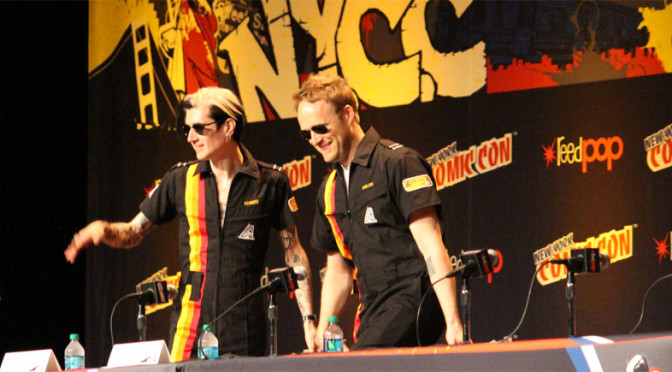 A Con wouldn’t be a con without fans and stars alike dressing up in some spectacular costumes, and NYCC is thankfully no exception to that rule. Come ogle some of the best.

Havok, a leading provider of 3D game development technology, today announced that it has unveiled the first full release of its free end-to-end mobile game development engine, Project Anarchy. The new version adds a range of features and enhancements including Autodesk’s Scaleform for free, full support for Tizen OS, a new packaging tool for application data management, as well as expanded rapid prototyping through both Lua binding extensions and support for a new vSceneViewer mobile app that allows developers to quickly preview and share their work. Additionally, Havok announced the details of its Project Anarchy PC Exporter upgrade. Allowing users … END_OF_DOCUMENT_TOKEN_TO_BE_REPLACED