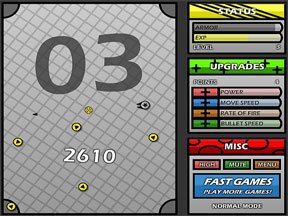 First I find myself playing BattlePaint and now this. I guess I’m just enjoying top down shooter a lot lately.

Diepix Arena stays true to the top down shooter genre. You are one lone circle with a gun and you’ll have to kill every enemy if you want to make it to the next level. There isn’t anything wrong with this either. It’s a formula that has proven to work over and over again. So long as you have a ridiculous amount of enemies and more levels than an RPG, which is why we have a bit of a problem here.

While the gameplay in Diepix Arena stands solid (which I’ll talk more about later) the game itself is short and easy. The enemies don’t come in enough numbers to even stand a chance at overrunning you. Sure the arena is a little small for a mass amount of enemies but some of these waves are so small that they couldn’t even make it out of their spawn points before you’ve killed them. So combine this with the fact that there are only 25 waves in the whole game and this ride will be over before you even make it a quarter of a way through your lunch break (based on a half hour lunch break). Which maybe that is exactly what you’re looking for, but even then understand that the replay ability of this game is almost nonexistent.

So while the game is short I did say it has good gameplay. As you may expect the game controls easy as can be to use, WASD will move your little circle around while the mouse will be used to aim and fire, No Problemo. What will really separate Diepix Arena’s gameplay from so many others is the upgrading system that is uses. There are four main stats that can be upgraded, Power, Move Speed, Rate of Fire, and Bullet Speed. These are pretty self-explanatory so I hope you won’t mind if I don’t go into too much detail about them. Increasing a stat does what I would hope obvious to the average gamer, heck even to a casual gamer (For the record I have nothing against casual gamers, I just know that sometimes terms the average or hardcore gamer think are obvious need to be explained to a casual gamer, and for some reason this usually infuriates the hardcore gamers, sorry this could lead into a really long rant about how some hardcore gamers need to understand that casual gamers are just that, casual), it’s pretty simple stuff people so let’s not go making it complex for no reason. Of course you’ll have to level up before you can spend points to upgrade stats. Killing enemies gets experience, experience levels you up blah blah blah blah you get the idea.

Alright so we’ve talked about the gameplay of your circle, so what about the enemies in the game? Well you’ll find the normal suspects of the top down shooter genre in here, from enemies that follow your every move to those that will fire on you relentlessly as you dodge every shot (or at least I would hope). There isn’t much surprising here and sadly none of the enemies will really present a challenge, not even on the hard difficulty.

On this same note I should mention that there is one boss to be found in the game. You’ll meet him/her (its purple how should I know?) on the final level and normally I’d tell you get ready for the fight of your life. I mean this is a boss and after all unless if comes from the Zelda series (I love Zelda but this holds true for all the games) we all know that bosses are suppose to be hard to kill. Well not here, this sad excuse for a final boss can be easily defeated simply by circling it and shooting. Not exactly the most epic of battles I’ve ever participated in.

As for the graphics and music in the game, we’ll they are a little less than mediocre. In fact the graphics are about as bland as possible and the music is generic as all get out (yes I know that’s and old saying, leave it alone). Some bright new colors and some upbeat and original soundtracks would do a lot for this game.

Still, all of this aside the game has potential. Add more enemies to each wave and then add about 50 more waves and we’d have a great top down shooter on our hands, but for now we’ll just have to do with what we have (or just not play it). Hopefully we will see a second game or even an update to the first that will fix these few problems.