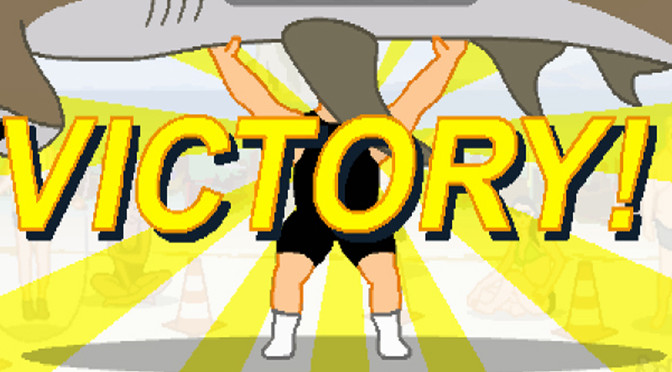 This week my adventures around the net brought me to a weird game called Shark Lifting 2. A game all about, well, lifting sharks.

Shark Lifting 2 puts the players in the role of a retired pro wrestler that has dedicated his life to shark lifting competitions in an effort to achieve a god-like state.

The game takes our hero around the world and has him climbing the professional shark lifting ladder, making rivals and breaking records.

The gameplay of Shark Lifting 2 is really simple. Each event has a 20 second time limit and players must click the left mouse button as fast as they can to life the shark. The faster the shark is lifted, the more points they earn. Each challenge is fairly easy and I found myself beating the game’s preset record on all but one occasion. This continues on for about 30 levels of ridiculousness. The final level even has the player lifting a Megalodon above their head.

Shark Lifting 2 has several minigames that are placed randomly between the game’s main events. One such game has the player trying to rush to the beach as fast as possible to get to a competition in heavy traffic. Another has them signing autographs for fans and the last is a memory game involving crabs. These all do a good job of mixing the game up before it gets too stale.

One of the best things about Shark Lifting 2 as a Time Waster is that it doesn’t take long to play. A single run though the game will take about 15 minutes and it saves between each event, making it easy to pick up right where the player left off.

The graphics in Shark Lifting 2 are a little strange. It’s obliviously trying to harness the Super Nintendo era of graphics, but it appears to mimic some of the worst on the console. However, there is a lot of attention to detail in character actions and what other people are doing in the background at these shark lifting events.

The audio in Shark Lifting 2 is a wonderful mix of upbeat old school music. There aren’t a lot of tunes as the game is fairly short, but those that are in the game fit well with its style.

Overall, Shark Lifting 2 isn’t a bad way to waste some time. The game is really simple, but that makes it easy to pick up and put down on short notice. The biggest problem would be trying to play this game during lunch breaks or between classes without everyone starting at you like a madman for rapidly clicking your mouse the way you are.