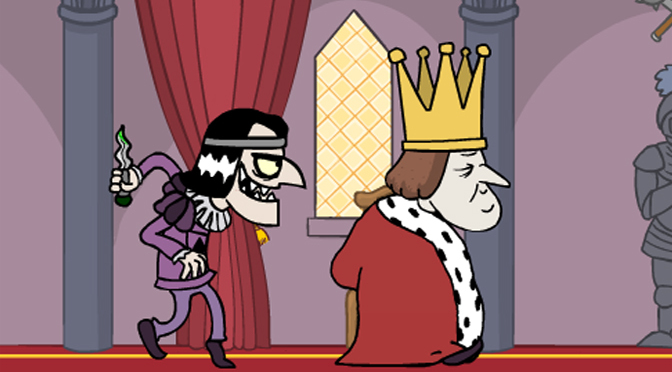 This week I didn’t have any Steam or smartphone games lined up for review and instead had to dig around to find an appropriate time waster to share with all of you. The game I found was MURDER.

The story of MURDER is really simple. Players are put in the role of an assassin that it out to kill a king and take his place. However, after their job is done, the assassin must fend off other assassins that would kill him and take over his role as king.

The gameplay in MURDER is really simple. Players hold the Spacebar to build up a knife stab. Once the bar is full, the assassin kills the king and steals his clothes to take his place. If the king turns around and sees the player raising their knife, the player loses and has to try again.

Once the player succeeds in killing the king and taking his place, he will then have to fend off assassins trying to kill him. All the player must do is press the Spacebar at the right time to catch the assassin. If the player survives long enough for the red bar that was built up for the stab to empty, they die and the current assassin behind them will take their place as king. Then the player is put in control of a new assassin trying to take the king’s place and the cycle repeats.

MURDER does have a few surprise endings if player lets themselves be killed by certain assassins or complete specific actions. They’re a nice touch that had me playing through the game multiple times to see all the different endings.

The graphics in MURDER remind me a lot of an old cartoon. The characters don’t look realistic at all and their movements very much remind me of Looney Tunes. One small feature of the game is that the player will slowly grow a beard as the king until they die of old age.

Overall, MURDER is a neat little game that is fun to kill some time with. It doesn’t last long at all and is really only worth 10 to 15 minutes of your time. The game’s free so there’s no worries of wasted money and its got a good sense of humor. Check it out during a break, but don’t expect it to entertain you for long.

MURDER stabs its way to 3 GiN Gems out of 5!