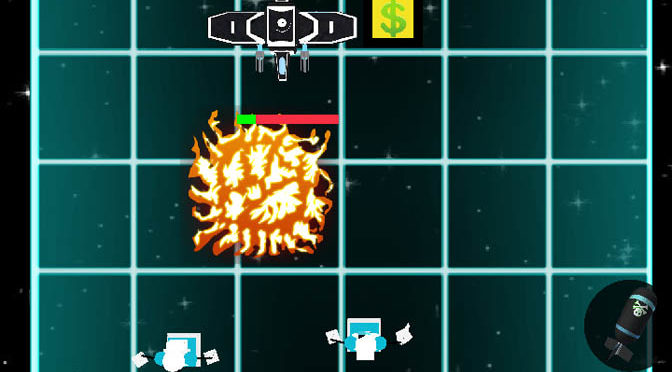 My time wasting this week had me searching my phone for something interesting to play. On this adventure, I found Upgrade The Game 2.

Upgrade The Game 2 is a simple game that has players fighting off waves of enemies to progress forward. Our weapon of choice for taking down these enemies is bombs. Players can drop bombs on enemies to damage then and they do so with the tap of their finger.

The player has unlimited bombs, but a limit on how many they can hold at any one point in time. When the player uses a bomb, they will have to wait a couple of seconds for a new to take its place. This means that players need to conserve and plan their attacks, rather than just tapping with reckless abandon.

As players move forward in Upgrade The Game 2, they’ll encounter larger waves of enemies and more powerful foes. Luckily, they will also unlock new weapons. There are three types of lasers that players can obtain. Each of these have their own effects, such as slowing or burning enemies. Lasers require energy to use and there’s a limit on this. However, enemies will sometimes drop energy upon death.

A big part of Upgrade The Game 2 is using money earned in game to buy upgrades. This includes making weapons more powerful, enhancing helpers that pick up gold and energy from the field, and more. These upgrades allow the player to progress forward with the game and explore new planets with more enemies.

Honestly, the gameplay of Upgrade The Game 2 isn’t all that interesting and there isn’t a story to be told. However, its graphics and audio have a little extra charm to them that makes this game worth it.

The graphics in Upgrade The Game 2 start out super simple. We’re talking blocks of color attacking each other. It doesn’t have to stay like this, though. The in-game shop also contains upgrades for the game itself. This means players can buy upgrades to enemies, background and just about other every aspect of the game to make it look better.

The audio works in the same way that the visuals do. When players start out in Upgrade The Game 2, all the music and sound effects will clearly be the developer humming or making noises. Upgrading these changes this to more traditional game music.

The overall concept of Upgrade The Game 2 is interesting. I’ve seen it done in a few other games before, but it’s still neat. The game itself may not be the best, but the idea was enough to hold my interest for awhile. Maybe it can do the same for you?

4 thoughts on “GiN Review: Upgrade The Game 2 the Max”