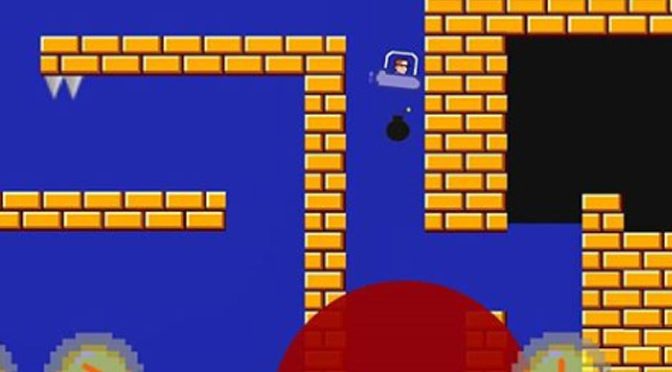 If you think I’m playing a game that is relevant to the holiday, then you’re wrong.  I actually broke one of my rules for gaming this week, which is no trap games. You know the type. I Wanna Be the Guy, Eryi’s Action and similar games. The game I broke that rule for was Trap Dungeons 2.

First off, don’t ask me about Trap Dungeons 1. I don’t even know if such a thing exists. What I do know though is that Trap Dungeons 2 strangely managed to keep be entertained this week, despite my dislike for trap games. I contribute this to playing the game on mobile. It made it perfect for something I could just waste a few minutes with and not feel overly involved.

The controls were another aspect of Trap Dungeons 2 that actually keep me playing. I’m typically not a fan of mobile gaming, but the simple controls were incredibly responsive. Players can move left or right, jump and duck. The large virtual buttons on the screen were easy to press, but didn’t really hinder me from seeing what I was doing in the game.

As far as the gameplay goes, Trap Dungeons 2 is a pretty typical trap game. Players move forward into what looks like a simple enough platformer, only to find out that there are traps everywhere. Some of these traps players can use quick reflexes to avoid. However, the majority require some form of pre-knowledge. Despite this, the game was still fun and not actually all that frustrating.

Players start off with 10 lives in Trap Dungeons 2 to complete the dungeon. Once they run out of lives, they can watch a video for 10 more. Players can do this twice, giving them a total of 30 lives to try and make it through the dungeon in. I have no problem with video ads used this way, but I don’t like that the game sometimes takes quick “commercial breaks” between lives to hit the player with a image or video ad.

There are two different dungeons for players to conquer in Trap Dungeons 2. Maybe that’s where the “2” in the title comes from? Either way, I haven’t beaten either of them yet. I’ve put more time into the first one than the second, but success is something I’ve yet to obtain. I do think I’m getting close to the end in the first one, though (I’m probably wrong).

The graphics and audio in Trap Dungeons 2 aren’t really anything grand. Both are super simplistic, and not really in the flattering way. I get that this isn’t a major concern for the game, but it could still be better. It seems like it’s trying to emulate I Wanna Be the Guy, but without near as much charm.

Overall, Trap Dungeons 2 is a solid way to waste some time. I’m not a fan of trap games and I still found it fun, which is think says something about it. Go ahead and give it a look if you’ve got some time to kill, or really enjoy this style of game.

One thought on “Trap Dungeons 2 is Actually Fun”