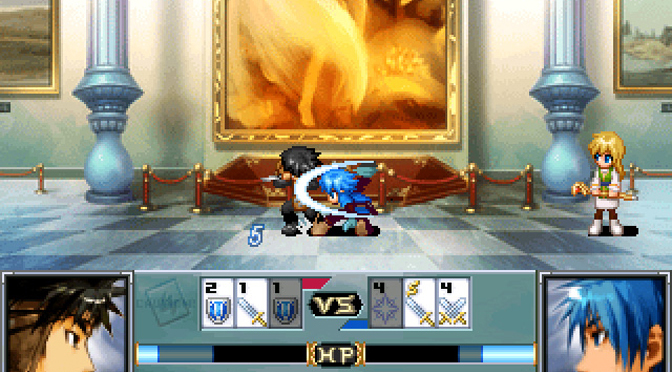 This week (actually, for the past couple of weeks) I’ve been playing through an indie JRPG on Steam titled The Sacred Tears TRUE. I don’t think I need to tell anyone of my love for RPGs, but there it is in case it isn’t known.

The Sacred Tears TRUE is a game that puts players in the role of an amateur thief trying to make a name for himself. He rolls around with a female mage as they both take on jobs from the thieves guild. This is idea is all fine and dandy and could have been fun to experience if the story of the game was interesting.

This was one of my main beefs with The Sacred Tears TRUE. The story was just uninteresting. It also didn’t make a lot of sense. The game starts out by letting the player know that the main characters are thieves by night and mercenaries by day. This wouldn’t be so bad if it wasn’t for the fact that the characters don’t wear disguises at night. They even have wanted posters that show their faces and still somehow run a legitimate business by day. It just didn’t make any sense.

There’s also the matter of how long chapters in the game are. Each of the chapters are really short. They usually last for one mission and can be completed in very little time. Luckily, there are chapters just for training and side mission that add more time to the game, but the main story cuts out real quick.

The gameplay in The Sacred Tears TRUE follows the same designs of many JRPGs by having turn-based battles. The game is a little different though in how combat works. The players have a deck of cards that can be used to fight against enemy. The system has players trying to predict what cards the opponent uses based on the color of them before combat. It’s a unique system and opponents and players can bluff to try and change cards’ colors in an effort to fool each other.

While the battles are neat, they are few and far between. The vast majority of my time spent with The Sacred Tears TRUE was me running around the same town over and over again and talking to NPCs. One flaw of the game is that running constantly drains a bar and however much of the bar is missing when a battle starts it subtracted from the player’s health. This is a stupid system as it tries to force players to stretch out their time with the game by not running.

There also just aren’t that many battles in The Sacred Tears TRUE’s main story and the game only has one town to explore. It makes for a tiresome experience to explore the same town all the time in an effort to meet the one NPC I need to talk to to further my quest.

Another issue I had with the game was its inability to work with Steam’s features. While playing the game, I was unable to open up the Steam menu via Shift+Tab. This left me unable to answer messages or access the serivce’s built-in web browser while playing the game. The only solution to this was to play in windowed mode. However, I even ran into problems here. Clicking away from the game caused the opening cut scene to stop, but it left the music playing. This had to two horribly out of sync by the time I realized what was going on.

The graphics in The Sacred Tears TRUE features 2D sprites and environments. The sprites are nice enough and the SD characters have a certain appeal to them. Characters also have nice portraits and drawn 2D scenes appear at the start and end of a chapter. If there was one major issue with the graphics, it would be just how cluttered the town is and the fact that there are some pathways that are hidden due to the town’s design.

The audio in The Sacred Tears TRUE is alright to listen to. It’s got some nice melodies that are good for relaxing the player. Battles have an upbeat tune to them that fits with the moment. The sound effects in the game aren’t bad either. The lack of voice acting could be a turn off for some, especially with how much text is in the game.

I want to see more JRPGs on Steam. It’s one of my favorite genres in video games and grinding through a good one is always something I’m willing to do. However, The Sacred Tears TRUE just isn’t that good of a game. It’s mostly filled with running around the same areas repeatedly and talking to a variety of NPCs that just aren’t that interesting. It does have an interesting combat system, but the rest of the game just drags it down.

The Sacred Tears TRUE earns 2 GiN Gems out of 5.