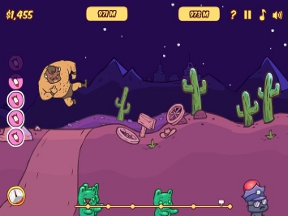 This week we welcome back a very old friend, Burrito Bison! Burrito Bison was one of the first Time Wasters I ever wrote. Way back then the Time Waster was still only a small article on Facebook limited to 600 characters (ridiculous right?). Well, it’s been close to a year since then and it only seems appropriate that we celebrate with a returning classic.

For those who don’t remember or weren’t yet Time Wasters Burrito Bison is a game about a masked wrestler who get trapped inside a bag of gummy bears while shopping at his local convenience store. Not to be held back by candied creeps Burrito Bison breaks out of Candyland and regains his freedom.

Burrito Bison Revenge picks up immediately after this with our hero finishing his shopping only to get to the register and realize his wallet is missing. Deducing that the evil denizens of Candyland must have stolen it from him during his imprisonment he dives back into the bag of gummy bears to retrieve his lost funds.

Burrito Bison Revenge uses the same basic gameplay style found in Burrito Bison. Launch yourself from a wrestling ring using the elastic cables and Rocket Slam your way through hordes of gummy bears to break into the vault that contains your wallet. The real difference between the original and Revenge is just how many upgrades are now available to Burrito Bison. There are several new gummy bears that can be smashed all of which give Burrito Bison a power up of sorts for a short period of time. These range from the mild grabbing a chubby gummy bear for an extra high bounce all the way to smashing a Nyan Bear that will turn Burrito Bison into a muscled up version of the internet-famous-meme Nyan Cat. The new upgrades are really enjoyable and add an extra bit of flavor to this already ridiculous game.

Graphically speaking there hasn’t been much of a change to Burrito Bison Revenge from the original. Some of the animations are smoother and of course there is a wider variety of gummy bears to smash through but not much else. That being said it doesn’t mean that the game looks bad at all. On the contrary Burrito Bison is one of those games filled with lots of life and color.

When it comes to audio Burrito Bison Revenge delivers. The menus are filled with music fit for a western high noon showdown and the in-game music reminds one of the high speed chases on horseback found in many of my Dads favorite old time cowboy movies.

Burrito Bison Revenge brings it’s A game to the Time Waster and reminds me exactly why I wanted to start this feature close to a year ago. The Time Waster was and still is designed to show the public just how great browser based gaming can be and just exactly what small developers can do.

Burrito Bison Revenge is a fine example of browser based gaming and easily body slams its way to 4 GiN Gems out of 5!