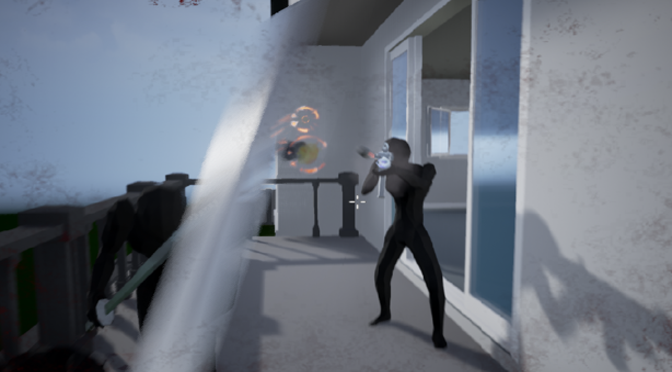 Alright, I’m finally ready to talk about this wonderful mystery game after having to put it off last week. That game is Sword With Sauce. It’s only in its alpha right now and is available on Steam via Early Access. That’s how I picked up my copy after watching ProJared play it on YouTube.

Let’s just get right down to it. Sword With Sauce is a game all about killing people and doing it how you want. If you want to run-n-gun while mowing down waves of enemies, do it. Maybe a more stealthy approach is up your alley. Then go for it. It’s up to the player to decide how they play Sword With Sauce, and that’s what really makes this game stick out.

The weapons available in Sword With Sauce also easily lend themselves to the different play styles. There is the bow and arrows, machine gun, sword, and the shield.

The bow and arrow option is all about taking out enemies from a range, but still being sneaky about it. It also requires a good bit of skill to properly judge the distance and put the right amount of arc on a shot. Also, the player has a very limited number of arrows, which means that accuracy is a necessity.

I personally found Sword With Sauce to be most fun when not using the machine gun, but someone else may chose it as their favorite weapon. It comes with a limited amount of ammo and will draw the attention of adversaries. Enemies also carry shotguns, which can’t be selected as a starting weapon, but can be taken from them after their defeat.

The sword is another weapon that has a huge focus on stealth. It will kill any enemy in a single hit, but the lack of range can be tough to overcome. However, it also has a special ability to get around this. When being shot at by enemies, the player can block with the sword to start deflecting the incoming bullets. This works great for closing in on enemies with machine guns. It won’t completely stop rounds from a shotgun, but it can deflect a few.

The shield is quite possibly the best weapon in Sword With Sauce at making the player feel awesome. Sure it has a bash attack that can take down enemies, but the real fun comes from throwing it. This lets the player go full on Captain America by taking down enemies with the shield from a distance. It will even bounce off walls and between enemies for multiple kills. Plus, it will automatically come back to the player if they are close enough to it after a bounce. It can also deflect bullets, but unlike the sword, it will send them back at enemies and kill them.

While the shield is easily the weapon in Sword With Sauce for throwing, other weapons can also be thrown. Throwing the bow, machine gun or shotgun with cause the enemy to recoil. This can give the player valuable time to pick up another weapon off of a dead enemy, or make their retreat. The sword is thrown like a javelin and it can skewer enemies when used in this way. It’s really satisfying to do and I have went through entire levels just killing enemies like this for the challenge of it.

Players that run out of ammo or lose their melee weapons also have the ability to flat out punch enemies. The great part is that when an enemy dies, their weapons jumps slightly into the air before falling to the ground. Let me just say, nothing feels cooler that turning to fistfight a guy with a sword, grabbing that sword out of the air after beating him to death, and the throwing it at another enemy that was approaching from behind the first. Seriously, it just feel so dang satisfying.

I’ve been talking a lot about the weapons that the player can use in Sword With Sauce, but that’s only a small part of what the game offers players. Before starting a level, players have the option to bring additional gadgets with them, and boy are there a lot of gadgets to chose from.

Sword With Sauce offers 20 different gadgets for the player to take out enemies with. There’s a back hole generator that sucks up nearby enemies, grenades, gas grenades, a gas mask, homing crab robots and so much more. Some of these gadgets are designed to be used with certain weapons. For example, the player has to bring arrows with them if they want to use the bow for more than chucking at opponents. There’s also additional ammo for the machine gun, a pistol sidearm and extra ammo for it, as well.

While all of these gadgets are definitely fun to play around with, there is one that quickly makes its way into everyone’s arsenal. This is the hook. It allows enemies to pull themselves forward to any flat surface. This means that players can use it to scale walls, make their way to rooftops and just generally Spider-Man around a level. It opens up a lot of new paths for players and makes the miniature sandbox experience that Sword With Sauce offers all the greater.

Sword With Sauce comes with three different levels: the Manor, Docks, and City. Each level it set up in a different way that gives players a lot of options. The Mansion is incredibly small scale and is great for sneaking. The open style of the Docks makes it great for going in guns blazing. The City has both open and closed areas that span multiple different heights. Each of these levels bring their own challenges and can be taken on in just about any way the player wants.

There are three different types of enemies that players will run into while playing Sword With Sauce. The first is the sword user. They are incredibly fast and will chase the player down once spotted. The second is the machine gun enemy. They target the player from a medium range and will fire a whole magazine of bullets at the player before reloading. The final enemy wields the shotgun. They will also try and attack from a medium range and will reload between each shot. Getting hit close range by one of these enemies is an instant kill.

The enemies that populate the three levels in Sword With Sauce always start out in the same position. They also all have their own routes that they will travel along. However, the enemies will adjust their routes depending on the player’s actions. This includes checking out suspicious sounds, such as the breaking of glass, and becoming more cautious once a dead body is found.

I won’t say dispatching enemies is too hard, but it can be a challenge if players aren’t careful. The goal of each level is to take out all of the enemies, of which there are usually around 30. There’s also a harder difficulty that requires the player not to be detected, but it’s dang near impossible as far as I can tell. The final game type in Sword With Sauce has endless waves of enemies spawning to fight the player. In this mode, players will earn resupply capsules after dispatching a certain amount of enemies.

The visuals of Sword With Sauce are simple and clean. Enemies are plain black mannequins that squirt red blood when killed. The different levels include buildings and objects that have simple textures on them. It helps the enemies stick out more, without looking bad.

When it comes to audio in Sword With Sauce, there really isn’t much. The game is mostly quiet and I believe that is by design. There is one generic song that plays in the background, but that’s about it. It isn’t loud and can easily go by without notice. Sound effects on the other hand stick out, which is a good thing. It makes it easier to pick up on enemy movements, attacks and so forth.

There really isn’t much to complain about in Sword With Sauce. Sure the jumping and climbing mechanic is clunky at times, and I did have a couple of crashes, but that’s about it. It’s really not bad for a game still in its alpha stages and I can easily overlook these problems due to its $3 price tag.

Overall, Sword With Sauce is a great way to waste some time. It may only be in its alpha, but there is a lot of content to keep players entertained. I’ve got about six hours in the game as of this writing, and I’m sure I’ll get more out of it over the next few weeks. Here’s hoping its development goes well. I’m looking forward to playing new levels and checking additional gadgets as the game gets closer to completion.

Being that Sword With Sauce is still in its alpha, it won’t be getting a review score. However, I’ll be more than glad to check it out again once the final version comes out. There’s no hard date for that yet, but the developer is hoping to have the game done by early to mid 2018.