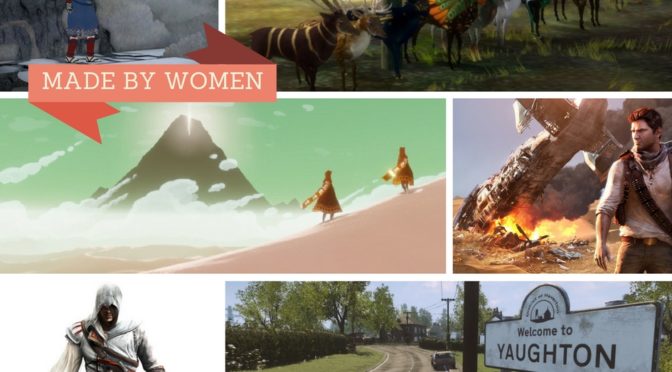 This week, the world celebrated International Women’s Day 2017 (IWD), which offers me a chance to shine a light on some of the best games made by women. You’d think this would be an easy task, but sadly, the state of representation in the industry means I had to put my head together with friends and colleagues.

According to the latest figures from TIGA, the games industry trade body for the UK, just 14% people working in games are women. Figures from the US-based International Game Developers Association (IDGA), offer a similar picture with only 22% of the industry being women. And typically, once you drill down into these figures the women may not be in technical or senior roles. However, the IDGA notes that in 2009 representation was a mere 11.5%, so things appear to be improving, but it’s slow.

But International Women’s Day is not the time to wallow in the pitiful state of the industry, but instead I’m here to present a list of 10 great games made by women. I appreciate that AAA games are made by huge teams of people, so the few big titles that are on this list featured a woman in a senior role, who had a big influence on the finished product. Otherwise, kudos goes to the indie scene, which allows women to create interesting and diverse games, which are sometimes funny or thought provoking or just plain cool.

Some of these games were made by a woman as part of a solo project, but many of them were made either in partnership with men or in teams that also featured a number of men. The point is not to ignore the work of men, but to highlight the  talented women who are working in the industry now and who just may inspire the next wave of women and men who want to make games.

Here is my list of 10 great games made by women:

Co-written with Patrick Lindsey, Zoe Quinn’s text based game falls squarely in the thought provoking category. Depression Quest tries to put you in the shoes of someone who is living with depression. The games places you in different situations and gives you choices. However, sometimes choices are crossed out, indicating how sometimes the logical response isn’t available to someone who is struggling with intense depression. Depression Quest doesn’t try to make entertainment out of depression, it simply tries to convey the difficulties of navigating the simplest things when coping with mental illness, using effective gameplay mechanics and writing.

Night in the Woods
Bethany Hockenberry – Co-designer and co-writer<

Night in the Woods is the early indie hit of 2017. Featuring a female lead character, Mae, the cat who lives in Possum Springs, the town populated with anthropomorphic characters. Part Animal Crossing, with a sprinkle of Twin Peaks and Life is Strange, Night in the Woods focuses on telling a mysterious tale with an emphasis on narrative and talking to the other characters to uncover the story. 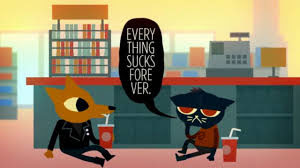 Journey
Robin Hunicke – Producer
Kellee Santiago – President and co-founder of thatgamecompany
Journey is one of those games that became an instant classic. We hadn’t played anything like it before and once you do you never forget it. As a lone, cloaked figure in a desert, your goal is a distant mountain. The real magic of the game is the shared universe, which means you encounter other players, as they make their journey. You can’t speak to them, but you can guide each other and travel together or simply pass on by. A hugely influential game, with a gorgeous art style, music and atmosphere.

Jessica Curry – Director and composer
Jessica Curry is the co-founder of The Chinese Room, the studio behind fan favourite, Dear Esther. Everybody’s Gone to the Rapture is considered the spiritual successor to Dear Esther. The game is set in a beautifully realised fictional English village, after an apocalyptic event, which means it’s abandoned. The story is revealed through audio dialogue, making it feel like a radio drama, with quality writing and voice acting. However, it’s the score which really sets Rapture apart, winning Jessica Curry a BAFTA.

Gone Home
Karla Zimonja – Co-founder of Fullbright and artist
Karla Zimonja is one third of The Fullbright Company, the team behind the original walking sim, Gone Home. The game was a critical success, but gamers took umbrage at the focus on narrative and the lack of typical game mechanics, such as levelling, killing and collecting items or reaching a high score. Instead, Gone Home is the story of a girl returning home to find her family missing. By exploring the house the player finds notes and unlocks audio scenes, which reveal the story. This is a structure, which has become familiar, as the walking-sim is now an established part of the gaming landscape.

Uncharted Series (1-3)
Amy Hennig – Director and Writer
Uncharted is one of the most successful and best-loved videogame series of all time and Amy Hennig played a big part in its success. Nathan Drake is the lovable treasure hunter who really should have a serious case of vertigo. He has a quip for every occasion, perfected the front tuck shirt and pulls you through every episode of the series. Uncharted delivers a truly cinematic gaming experience that’s both exhilarating and heartbreaking in places. Pacy storytelling and compelling gameplay make this a world class series. Amy Hennig has left Naughty Dog and is currently working on a Star Wars game for Visceral Games – expect good things. 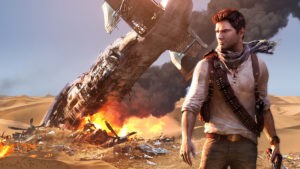 Assassin’s Creed
Jade Raymond – Producer
Assassin’s Creed started as a flawed, but promising premise and has grown to become a flagship title for Ubisoft. Jade Raymond was producer on the very first game, which set the bar high for world-building and created a new era of openworld gaming. Taking history as its inspiration, the Assassin’s Creed series creates detailed worlds for the player to explore, using cities of the past as beautiful backdrops for whirlwind, parkour fantasy adventures. Raymond left Ubisoft and joined EA, where she is working with Amy Hennig on the Star Wars game.

The Endless Forest
Auriea Harvey – Designer, co-director
Auriea Harvey is one half of Tale of Tales, two artists who create artistic gaming experiences. Before Journey there was The Endless Forest. This browser-based game features a forest full players who take on the role of deer-type creatures. With nothing but a symbol above your head, there’s no way to speak to your fellow deer. Commands such as run and jump and other deer-like gestures are your only means of communication, but somehow it works. In addition, the developers stage in-game events that serve as acts of the gods, creating a magical experience. Tale of Tales also created horror game, The Path, based on Little Red Riding Hood and The Graveyard, a game about ageing. 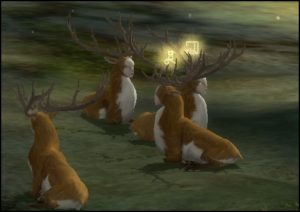 Gabriel Knight Series
Jane Jensen – Creator
Considered a master storyteller, Jane Jensen was the creator of Gabriel Knight, a series of point and click adventures from Sierra. The eponymous Gabriel Knight is an author and bookstore owner with a penchant for bleach blond hair that wouldn’t look out of place on Baywatch. Set in New Orleans, Gabriel’s sidekick is Grace Nakimura, who sometimes becomes the player character, as they investigate supernatural mysteries. Jensen now owns Pinkerton Road Studio, which focuses on graphic adventure games.

Nyamyam, which is owned by Jennifer Scheidereit. This beautiful game is set in Japan and uses the idea of paper folding to create a stunning, pop-up book style world. Featuring a feudal Japan of cherry blossom, snow and mysterious landscapes, you can fold and slide the pictures to solve puzzles and move through the game. For an atmospheric game that makes you feel like you’ve jumped into a storybook, look no further.

Do you have any games made by women (including trans and enby/non-binary) to recommend? Leave a comment and I’ll add them to next year’s list.