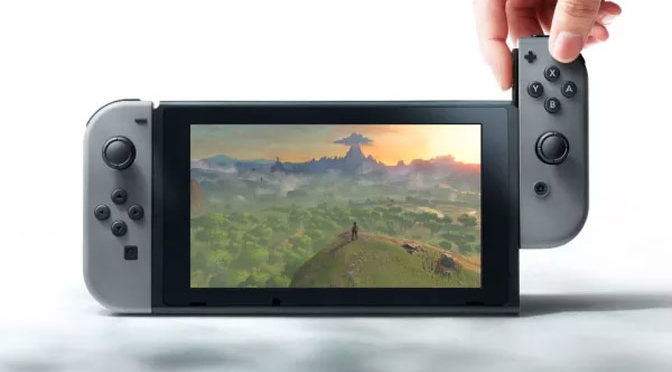 I remember the first time I got to see the Gameboy adapter for the Super Nintendo. It was a simple concept: Your Gameboy games could slot into an SNES cartridge and be played on the big screen, and for my 7-year-old mind, there was nothing more mind-bogglingly wonderful. That was two decades ago, when Nintendo’s biggest — and really only — competition in the gaming market was Sega. But the gaming landscape has seen seismic shifts in that time, and while Nintendo still has the market cornered on handheld gaming, its consoles have lagged behind Sony’s and Microsoft’s offerings.

Despite those struggles, Nintendo has never been a company afraid of trying something new, even radical, which leads us to their latest attempt to shake up the console market: the Nintendo Switch, a hybrid system that combines the design of a handheld with a traditional gaming console.

It sounds like a quirky gimmick, but for the most part, the Switch is a brilliant piece of hardware. Of course, this is Nintendo we’re talking about, per usual, the Switch brings some questionable design choices to the table. 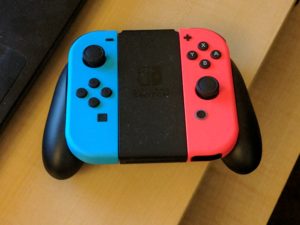 Out of the box, the system doesn’t look like there’s much to it. It comes with a left and right Joy-Con controller (more on that below) with two wrist straps, the Joy-Con grip, the docking station, an HDMI cable and an AC adapter. Setup isn’t terribly difficult, although not including an instruction manual made things more of a chore than they needed to be.

The Switch allows users to play in one of three styles. Attaching the Joy-Cons to the sides of the system lets you play in handheld mode. For those who want the portability but prefer a more traditional experience, the Switch also features a kickstand on the back that allows you to hold the controllers in your hand while setting the tablet on its own.

Finally, there’s docked mode, which turns the Switch into a traditional console and also charges it. Multiple reports list the Switch’s battery life between three to six hours, depending on activity and how graphics-intensive the game you’re playing is. Being able to switch (pun intended) between the different styles of play was one of the key features for the system, and it works flawlessly. As part of that design, Switch games are cartridges, saving space and eliminating the need for a disc drive and moving parts. 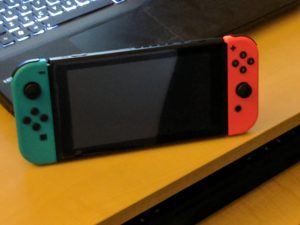 The result is a seamless transition from handheld to traditional console with beautiful simplicity. The Switch slips onto the docking station with ease, and despite some reports of the docking process scratching the edges of the system outside the display area, a screen protector negates the issue.

The tablet’s screen renders games in 720p, which is more than adequate for its size, and when docked, Nintendo has said The Legend of Zelda: Breath of the Wild displays in 900p. Those numbers may not seem overly impressive, but Nintendo’s game isn’t to wow anyone with power here, and the graphics are excellent for what they’re trying to accomplish.

Additionally, the Switch’s display acts as a touchscreen, further helping to separate the handheld setup from the docked one. Motion controls also come into play, regardless of whether the console is docked or not. For instance, in its handheld state, moving the console around allows players to aim an arrow in The Legend of Zelda, but when docked, that feature moves to the controller. The system picks up the motion control with impressive accuracy and makes the welcome change of doing so without using a sensor bar. 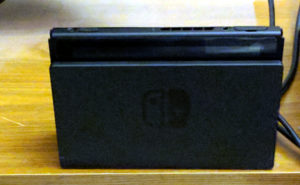 For as impressive as those features are, it’s not all rainbows and butterflies with the Switch. The Joy-Con controllers present a neat idea in their ability to snap onto the system, be held separately from one another, or placed in the supplied grip to make them feel like a traditional controller.

No matter how you try to use them, though, the Joy-Cons are terrible. They’re small, lack a traditional D-pad, feel unresponsive, feature four shoulder buttons that are overly sensitive and difficult to hit, and are a pain to attach and remove from the console. You can also turn each controller sideways for certain games. Extra Joy-Cons will run around $80.

On the flip side, the Pro controller is superb. Designed as a traditional controller, it can do everything the Joy-Cons can, including motion control, looks and feels great, is responsive, and features large, easy-to-press buttons. Unfortunately, the Pro controller will set you back $70, which is a shame because it’s almost a requirement given how bad the Joy-Cons are. 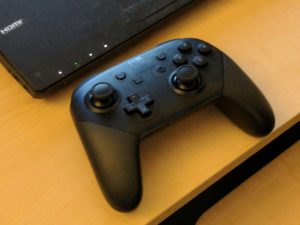 The controller hang-up isn’t the only issue the Switch faces. The hardware features 32GB of internal memory, which Nintendo says can be expanded by using up to a 2TB SDXC memory card. (These aren’t currently in production.) Downloadable content, screenshots and games from Nintendo’s eShop can also be stored on the SD card.

However, saved game data can’t move to the card as of the time of this writing. That means, should something happen to your console, your saved game data is gone. There’s no way to transfer it. Nintendo has indicated this may change in the future, but as of now, all saves are tied to the system.

There also seems to be an issue with how the Switch picks up Wi-Fi. The PlayStation 4 and Xbox One sitting in the same area have a solid connection, but the Switch fails to pick up the signal from my home router until I move it closer. Strangely, once I do that and move it back to its docking station, it retains the signal. 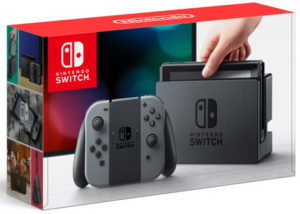 Even removing the Pro controller from the transaction and placing in a smaller-sized SD card, that’s still more than $400 before tax.

Yet despite these grievances, there’s something undeniably cool about the Switch. It doesn’t knock it out of the park in any one area, but there are so many little touches that make it endearing. Things like, the tiny fan that keeps the system cool, or the speed at which the console converts from portable format to docked is impressive. The overall quality is also great, pretty much what you’d come to expect from Nintendo. As odd as some of their design choices may be, there’s never been any question that they make a system that lasts. 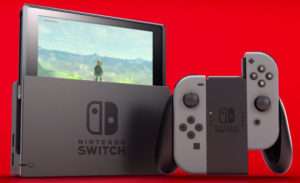 Only time will tell if the Switch brings Nintendo back to the forefront of the console wars, but the majority of its success is going to depend on its games and exclusives. You wouldn’t think that would be an issue with Nintendo’s incredible catalog of intellectual properties, but the Wii and Wii U proved otherwise. Thus far, it’s off to a strong start with Zelda — a game that makes the Switch worth owning all by itself. Still, the Switch is going to need the likes of Mario, Super Smash Bros., Donkey Kong, Kirby and others to make it a success.

For all its shortcomings, the Switch has a lot going for it, and with the promise of Nintendo’s stable of games backing it, I have high hopes. If Nintendo corrects the issue with saved games being locked to the system’s internal memory, the Switch could very well stand as their return to console glory.

The Nintendo Switch earns 3.5 GiN Gems out of 5.