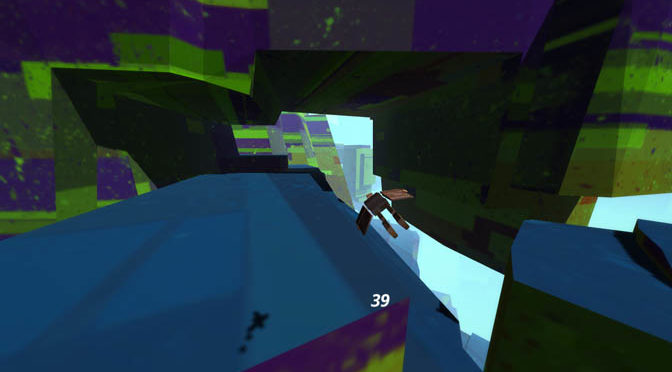 I hope everyone enjoyed their holidays and are ready to get back to the grind! No, you’re not? Huh. Then maybe I have just the game for you. It’s name is Superflight.

Superflight is a game that puts players in the role of a blocky wingsuit wearer as they explore equally blocky worlds. The controls of the game are simple and easy. Using either a keyboard or controller, the player can move the character left, right, up and down. That’s it. There’s nothing else to control.

The main goal of Superflight is to rack up points by flying close to  obstacles, such as cliffs. Players earn more points the closer they fly to an obstacle and can earn even more by flying through tunnels and other parts of the world. Those that don’t care for this can also just explore with a mode that turns off scoring.

There are thousands of procedurally-generated worlds for players to explore while playing this game. Each level is unique and players can travel to different levels via portals that show up in the worlds. The worlds aren’t large, but they are interesting to explore. It feels great to map out a flight path for a new highscore and then succeeding after several attempts.

Players can also create worlds in Superflight via seeds. This means that they can type in just about anything to have a unique world show up. This acts as a way to easily share worlds with other players. There’s also an option to save worlds for later in case players find ones that they really enjoy flying through.

The graphics in Superflight are simple, but work well for the game. It also helps that this isn’t some big AAA title, but rather one that just costs $3 and comes from a team of students. It’s easily worth this price and I didn’t find the blocky graphics to be a turn off at all. Especially not when the game does such a good job at nailing the sense of speed that comes with flying past a nearby wall.

There isn’t much in the way of audio in Superflight. The game contains no music at all, but does have wind sound effects for flying around. The wind sounds great and it works well when listening to your own music. I’m not saying that it wouldn’t have been nice to have some generic relaxing music in the game, but it isn’t a major blow to it either.

Overall, Superflight is a really fun game that I easily recommend people go out and buy. It’s great for some quick gaming, but that feeling of “just one more try” can also keep a player glued to it for longer periods. Go check it out and I hope you all have a wonderful start to the new year!

Superflight earns 4 GiN Gems out of 5!