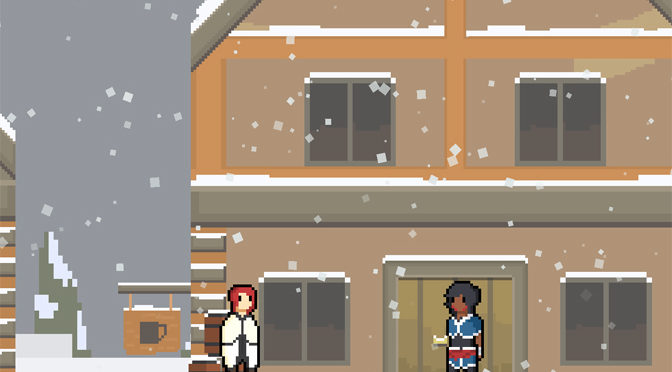 This week’s a big one for PC gamers as Steam’s Summer Sale has begun. PC is my main platform anymore and I’ve already jumped on those sales to buy a few games. Honestly, most of them are PlayStation 2 games that I never got to pick up during their original release (Disgaea 2, Pahntom Brave and others). However, I’ve also been eyeing some indie games that are on sale. Still, I was able to pull myself away from sales for the Time Waster this week and I found an interesting browser game in Millika Village.

Millika Village is an RPG that puts players in the shoes of a wanderer that passes out during a blizzard while travelling over a mountain. The wanderer is found by some locals of a nearby village and is saved. However, strong blizzards keep them from leaving the village and a major storm is approaching.

Millika Village gives players 20 days to work in the village and increase their stats. These stats are Strength, Agility, Intelligence and Charisma. There’s also a stat for the village’s Morale. Doing different jobs in the village will increase the player’s stats. This allows them to better handle certain tasks. For example, Intelligence makes the player better at treating wounds and Strength lets them move large objects.

The stats in Millika Village don’t have a use in day-to-day interactions. However, they are important to how the story unfolds. The game has events that will take place and the player can use their skills to overcome these problems to the best of their abilities. If the player’s stats aren’t high enough, then they will fail the event and it will affect how the story unfolds. Failure and success of these events also decrease and increase the village’s Morale.

The first playthrough of Millika Village is more about experimentation than making the best decisions. It allows the player to see which events happen on what days and lets them plans for the next run through the game. My first time beating the game got me the bad ending, but my second time got me the good one. There’s also a best ending to the game, but I didn’t put in the effort to obtain it.

The multiple endings in Millika Village are what really make the game interesting. Sure, I didn’t get the best one, but that’s because the good one left me satisfied. Other players may not see it that way and choose to keep going for the better ending. If they go this route, the game has a handy feature to it: skipping dialogue. This is necessary as much of the game is about talking to and building relationships with the other residents of Millika Village. It helps flesh out the characters, which in turn makes the player care more about what happens in this lonely mountain town.

The graphics in Millika Village are pixel art combined with still images. What pixel art there is in the game is great, but only a few areas have it. Everything else relies off of text to describe what is happening. While not a killer, I would have loved to at least have some still images for these moments. The other still images in the game are character portraits. These change to show the different moods of the characters. Some story events can also make changes to them, as well.

The audio in Millika Village matches well with the visuals. The soft tunes that play throughout the game fits well with the isolated feeling of a lonely mountain village. It is also a great calm before the final storm that players will have to try and survive. There are also some sound effects for the weather and they also fit in well with the rest of the game.

Overall, Millika Village is a neat little game. It has a bigger focus on story than anything else, but that isn’t a bad thing. Figuring out what stats to increase when is the key to the game and it works well. There could be some improvements to the graphics, but I wouldn’t say it is bad. The multiple endings also make it interesting to go through a second, or maybe even third, time.