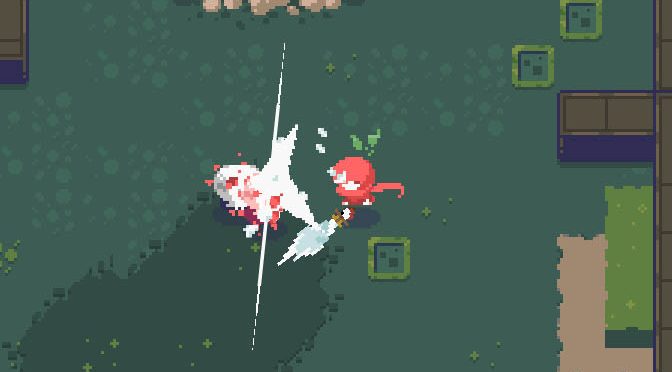 This week I’m back to browser games and I’m checking out Soul Sword.

Soul Sword is a small game that was made for Ludum Dare 41. It’s been a while since I’ve covered a game from one of these competitions, so let me explain. Ludum Dare is a competition that challenges developers to create a game with certain themes in just 72 hours. The theme for this game was combining two incompatible genres.

I don’t know exactly what type of genres Soul Sword was trying to combine. The game is a simple hack-n-slash with enemies that drop loot. Players can take this loot out of the dungeon and sell it at a small shop that they run. That probably sounds familiar to anyone keeping up at GiN, but Moonlighter this is not.

Everything about Soul Sword is just a little too simple to make it really stand out. That includes the combat and the shop-keeping aspect of the game. Players just set items up in the shop and let these weird NPC ghost purchase them. They can’t determine prices or anything like that.

As far as combat goes, the player can attack in all eight directions around them. However, the only attack they have is swinging their sword. Players can just hold the S key to do this infinitely. There’s also a dash that players can buy after saving up money. It’s not a very far dash and takes a second before it can be used again, but it is better than nothing.

The money that the player earns can also be used to buy other things to help them on their journey. This really only covers two types of items: weapons and health. There are a variety of different weapons in the game, but they all act basically the same. Players can also buy additional hearts, or refill the ones they already have.

While the gameplay of Soul Sword is a little lacking (even for a Lundum Dare game), the visuals are great. Soul Sword takes great care in presenting the player its sprite art. There are some nice animations for clothes flowing in the wind. As well as attack and dodge animations that look good. The rest of the visuals are also really good.

The audio in Soul Sword is on par with its visuals. There’s a nice bit of ambient background noise outside of dungeons, and fitting tunes inside of them. The sound effects also mesh well with what is happening on screen, which is always a plus.

Soul Sword is a bit lackluster in the gameplay department, but it looks good. I’d like to see what this developer could do with more than just 72 hours at their disposal. They might also benefit from joining a team of developers, if they aren’t already part of one.

Note: Looks like I’ve checked out this person’s work before! They were responsible for A Kitty Dream.